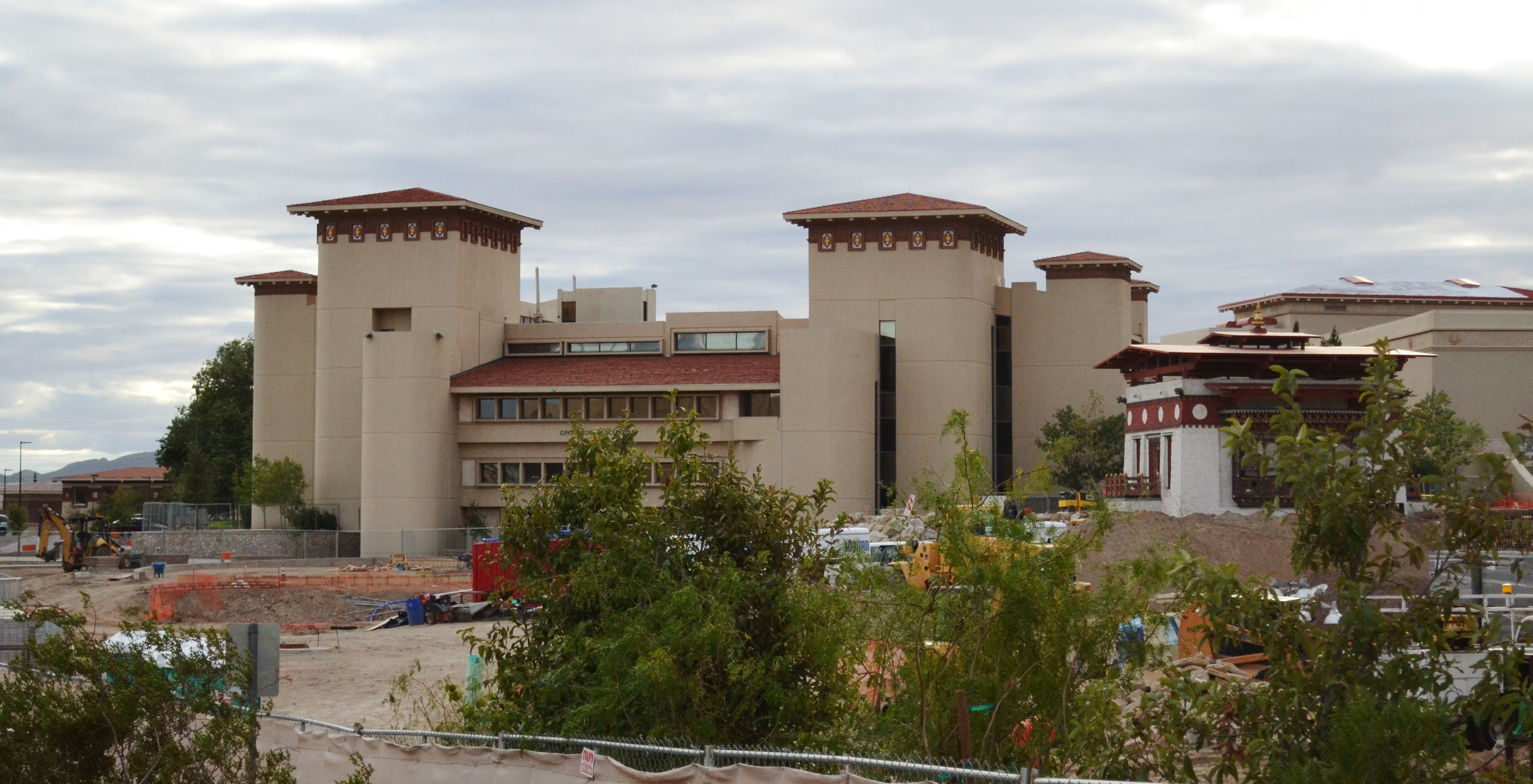 A former Bhutanese temple has been reconstructed and installed on the UTEP campus in front of the Geological Sciences building.

EL PASO –Sweating from a three-hour rehearsal of George Fredric Handel’s opera Acis and Galatea, Bhutanese performer Tshering Goen, dressed in blues, yellows, and deep reds began to prepare for a second round of practice. Goen, a director of the Bhutan Royal Academy of Performing Arts, came here to perform at the University of Texas at El Paso, a campus filled with buildings inspired by Bhutanese architecture. The Kingdom of Bhutan is at the eastern end of the Himalayas in South Asia.

“I feel as if I am back in Bhutan,” Goen said with calmness in his voice as he donned an animal mask to continue with the rehearsal of a classic Western opera in Bhutanese dress.

The Bhutanese interpretation of the classic Handel opera fit perfectly with the architectural history of this campus, nestled in the foothills of the Franklin Mountains in the Chihuahuan desert. For most students, Bhutanese architecture comes from an unknown, faraway place. However, for Goen it is home.

“The day we arrived here the vice president of the university took us around the campus,” Goen said. “From my point of view the architecture is exactly the same as in Bhutan.”

Bhutan blends with the U.S. Southwest

The suggestion to model UTEP’s architecture on Bhutanese style was made by Kathleen Worrell, wife of the first dean of the university. She was captivated by the April 1914 National Geographic article titled, “Castles in the Air: Experiences and Journeys in Unknown Bhutan.” John Claude White wrote the article and it included 88 black and white photographs of ancient monasteries that dated as far back as 16th century Bhutan.

Max Grossman, who teaches Art History at the University of Texas at El Paso, said the history of the university is very complex.

“It was really a science and engineering operation then, but the idea was to expand it into other areas and to grow the institution,” Grossman said.

The Worrell’s made the decision to relocate the university, originally named the Texas School of Mines and Metallurgy, away from the outskirts of Fort Bliss after a fire destroyed the school’s only two buildings on October 28, 1916.

They relocated to the current site of the university, at the time far away from downtown. Grossman said students had to take a street car and then walk roughly six or seven blocks in open desert to get to campus. A former Bhutanese temple has been reconstructed and installed on the UTEP campus in front of the Geological Sciences building. Photos by Renee Malooly, Borderzine.com

Henry C. Trost moved to El Paso in 1903, formed the architectural firm Trost & Trost with his brother, and was responsible for designing more than 30 structures in downtown El Paso.

“I can’t emphasis enough how important it is that we have these buildings that were designed by him,” Grossman said.

According to Grossman, the Gibson & Robertson sketches were sold for $930 in cash. At first, Trost rejected the idea of Bhutanese architecture and wanted to impose a Southwest style instead.

“There is evidence that he wanted to build the campus in the mission style,” Grossman said. However, Trost was forced to continue with the Bhutanese style, and based his designs on the Gibson and Robertson’s sketches. Construction of the first five structures took place from 1917-1918 at a cost of $115,000.

“The sloped walls that are characteristic of our campus are derived from Bhutan,” Grossman said. “They are meant to fend off invasion and prevent the walls from being breached.”

Mandala, Sanskrit for circle, is a familiar shape on most of the buildings. Cardinal coordinates are represented in the circles, along with colors that symbolize Buddhist customs. Red signifies memory, yellow suggests effort, blue means wisdom, and green is the symbol for meditative stabilization. The main color of the walls, a light beige, is symbolic as well.

“The color white, or in the case of our campus a light beige, stands for faith,” Grossman said. He said the style of architecture is also resistant to wind and changes in the weather, a feature common in Bhutanese architecture as well.

“Between the upper story and the roof there is a crawl space with little ventilation windows to allow the building to breathe,” Grossman said. “It’s a cushion so that the building’s cooler in the summer and warmer in the winter.”

The university buildings elicit many Bhutanese customs. The prayer flags, prayer wheel, and temple all bring serenity to the campus. Opera Bhutan is another way Bhutanese ideals can be spread to the western world, and to also bring unity between two diverse nations, Goen said.

“Bhutan is a culture of beauty,” he said. “Culture is our identity so we have to preserve it.”

Grossman developed a tour on campus that takes visitors on a journey through Bhutan. While his expertise is in Medieval and Renaissance Italian architecture, Grossman said he enjoys Bhutanese research as a hobby.

“This really is a completely unique treasure that we have,” Grossman said.