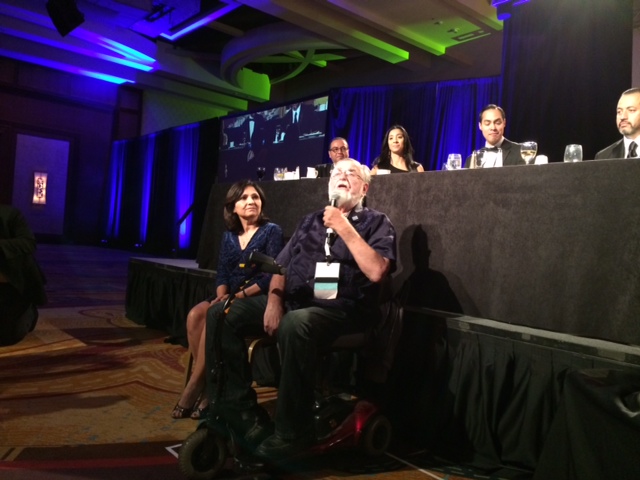 Hispanic journalists from all corners of the country made their way here to the NAHJ convention to celebrate its three decades of advocating for more minority participation in news media.

Much of the talk at the four-day NAHJ convention was on the diversification of newsrooms throughout the United States and that conversation became a strident argument.

During the convention’s final event – the Gala and Awards banquet – the association recognized news organizations that had “increased the visibility and accurate representation of Latinos in cable news,” including CNN, PBS, Buzzfeed and Fox News Latino.

Ericksen, 84, a founding member of NAHJ, was given a chance to speak when he was recognized for his lifetime of work in newsroom diversity.

He told the gathering that celebrating increased visibility and accurate representation of Latinos in the media by honoring a network such as Fox News was a “kind of a farce.” He also said that despite the organization’s 30 years of work on increasing newsroom diversity the number of Latinos in mainstream newsrooms has actually declined.

Over the last decade, the number of Latino journalists in legacy newsrooms has hovered between 4 percent and 4.5 percent of total newsroom staffs. Due to the overall contraction of newsrooms, mainstream news outlets have lost 2500 journalists of color– Blacks, Hispanics, Asians and Native Americans – since 2007 when they numbered 7400 ­ in the last six years, a decline of 34 percent. Ericksen’s criticisms were not taken well by then acting NAHJ president Hugo Balta who earlier in the Gala evening had presented an award to Fox News Latino and other outlets and apologized for Ericksen’s statement. “I will not allow any of our guests to be singled out or be insulted in this way,” Balta said to Francisco Cortés, vice president of Fox News Latino. During the banquet, Cortés accepted the NAHJ award on behalf of Fox News Latino.

Balta said that Fox News Latino and the other outlets deserved their awards.

“They did not give awards to NAHJ members who achieved wonderful stories and assignments,” Ericksen said. “Instead they gave it to reporters who did not report on Hispanic issues clearly and accurately. Why award them when they continue to ignore and misrepresent the Hispanic community?”

Many NAHJ members applauded the Hispanic Link founder’s statements. One voice in the audience said that Ericksen was the only one with enough “ganas,” to tell the obvious truth.

Later, Ericksen said it was ridiculous for Balta to defend Fox and also praise himself and his administration. “I plan to propose to the new board that they set standards on whom they award for Hispanic community representation in their newsrooms,” Ericksen said.

According to a Pew Research Center report, journalists including reporters, anchors, photographers and editors of color have seen a decrease in numbers in media in the last two decades.

One day before Ericksen’s comment, Phil Griffin, MSNBC’s President apologized to the NAHJ membership during the convention for a Cinco de Mayo segment in the Way Too Early program hosted by Thomas Roberts.

Roberts had featured a man wearing a sombrero and taking swigs of tequila stumbling across the set. It is widely known that the holiday is celebrated mostly in the United States and not in Mexico. “I was horrified by it,” he said. “And, I never want that to happen again.”

Griffin participated in an open discussion with Alex Nogales, the President and CEO of National Hispanic Media Coalition, which was moderated by Univision’s news, anchors Enrique Acevedo. He later answered questions from NAHJ members who were mostly upset with the lack of representation of people of color in newsrooms.

Much work still to be done

In the Association’s 30-year existence it has seen only a small payoff for all its work. NAHJ members expressed the opinion that they are still engaged in an uphill battle that will continue until networks begin to hire more journalists of color, place them in their main newsrooms and not segregate them in “Latino” newsrooms.

Ericksen expressed the concern that until that happens the Hispanic community will continue to be misrepresented by the media. Nogales also pointed out that including Hispanics in newsrooms and in coverage and discussing Hispanic issues are profitable options that should be encouraged in a media industry that is suffering.