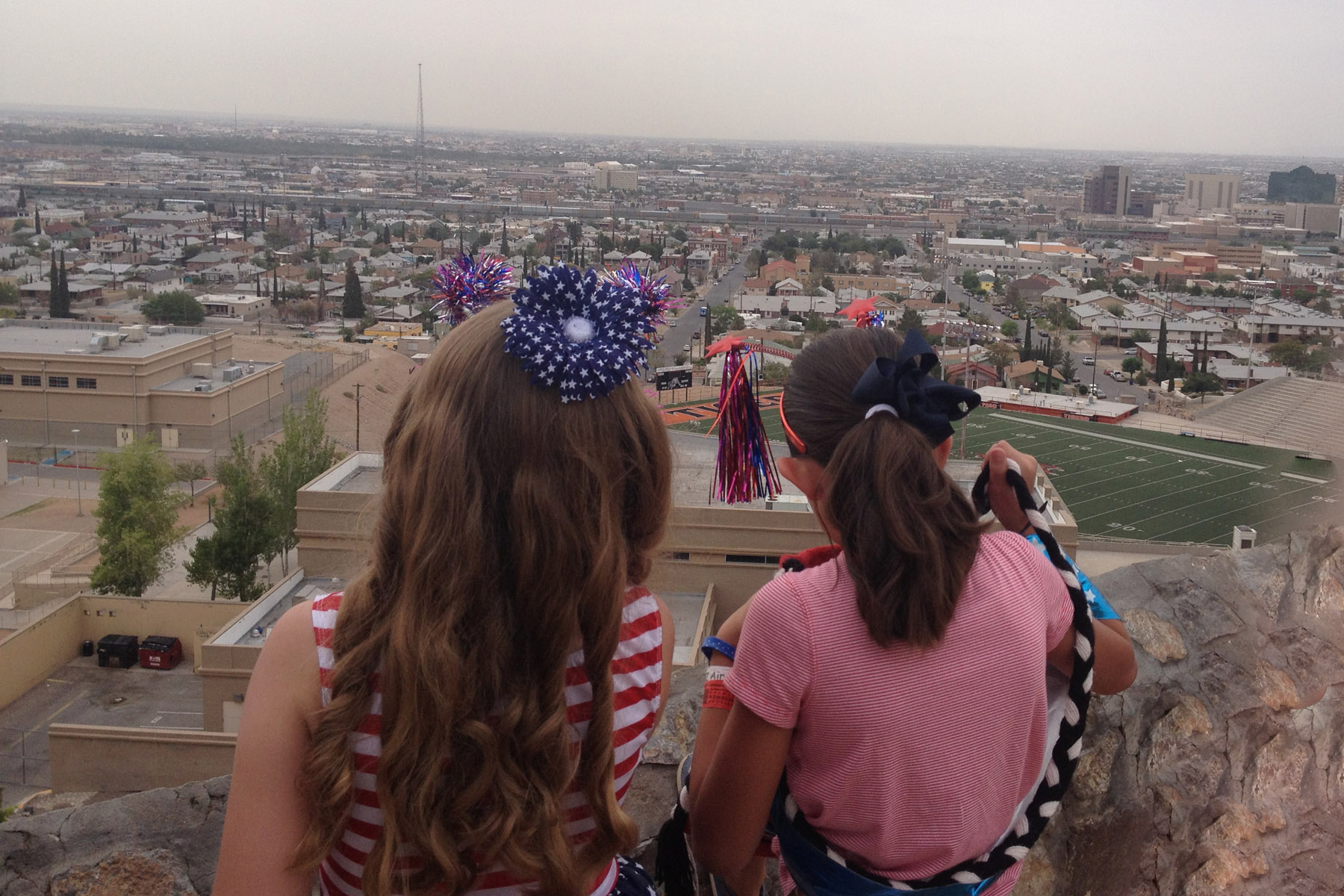 It’s a sweltering summer Sunday night in El Paso, Texas, at the city’s new downtown baseball stadium, where the local Triple-A team, the Chihuahuas, is leading the visiting Tacoma Rainiers at the seventh-inning stretch.

As the hammerlock of the day’s 102-degree heat begins to release its grip on this high-desert town, a sellout crowd of 8,607 fans rises to its feet to sing and sway along to “Take Me Out to the Ball Game.’’ Immediately after, trumpet-charged mariachi music blasts over the sound system and the crowd roars with glee as Chico the Chihuahuas’ mascot dances onto the field, wagging his tail and making the team’s signature “Fear the Ears’’ gesture with his paws.

And if there is a city that characterizes our new America, it’s the very old town of El Paso, circa 1659. I spent a week there this summer studying at the University of Texas at El Paso and its Dow Jones Multimedia Training Academy. As I left campus to visit taco joints and burger stands, coffee shops and watering holes, I met dozens of the 674,433 residents who call El Paso home. I walked the border fence between the United States and Mexico and crossed over into neighboring Ciudad Juárez, El Paso’s larger sister city of 1.5 million people. What was most noticeable to me in this historically rich city was what I didn’t see: The little daily antagonisms over immigration that I routinely witness back home in Orlando. Here I was in a city profoundly shaped and impacted by immigration – legal and illegal – on a daily basis. Yet I spotted not one “Welcome to America. Now Speak English!” bumper sticker on a car driving down Mesa Avenue,  like I see all the time on my commute on State Road 417. No angry letters in the El Paso Times, the city’s leading newspaper, calling for mass deportations and a bigger fence. No customers standing in line at Lowe’s harrumphing about signs in Spanish.

And this summer, as the Southwest, including El Paso, was slammed with what President Obama called a “humanitarian crisis’’ of up to 90,000 unaccompanied immigrant children from Central America fleeing drug wars and gang violence – still the Sun City took it in stride. No banging on buses by protesters shouting “Illegals Go Home!’’ as in other cities in Arizona and California. In June, as El Paso faced a sudden influx of 2,000 mostly women and children from Central America, city leaders worked with local Catholic churches to provide water, food, clothing and bus fare to return them home or resettle them elsewhere in the states with family members until their status could be reviewed and determined by judges.

So, what’s up with El Paso?

“This community was already helping children before we had this humanitarian influx of immigrants,’’ says city councilwoman Lily Limón, an El Paso native and retired educator who represents the city’s southeast side. “The community has been very responsive … In El Paso we have always lived and co-existed in a peaceful manner. It’s taken a while but this is a community that lives at peace with our diversity. Whether it’s the Filipino community or the African-American community, or the Korean community or the Lebanese community – this is a tapestry of cultures. So it’s not like other areas that are not as diverse that have had those kinds of problems.’’

Indeed, immigration in El Paso, which is 81 percent Hispanic, is as natural as the sunrise. Each morning as the first orange-pink rays of the desert sun dart across the El Paso-Juárez metroplex, thousands of motorists and pedestrians cross one of the city’s three international bridges between the United States and Mexico to go to work, to school or to visit family. The idea of building an impregnable wall at the Rio Grande – the immigration “reform’’ constantly pushed on national TV and radio talking-head shows – is laughable to most El Pasoans, whether they are Latinos or Anglos.

“People who don’t live on the border often don’t understand the complexity of border life,’’ says Robert Moore, editor of the El Paso Times. “Millions of jobs across the country are tied to international commerce moving across the U.S.-Mexico border. It would be economically disastrous to create the sort of sealed border you often hear discussed. As a country, we need to promote efficient movement of legitimate commerce – both people and goods – while making illegitimate commerce more difficult.

“The move to build physical barriers is sad and shortsighted, particularly in urban areas like El Paso. These sorts of structures belong in war zones. Despite the rhetoric, we are not facing an invasion from Mexico. We are, for the most part, seeing an influx of people trying to make a better life for themselves and their families. Most have no intention of permanently moving to the United States. Truly tackling the underlying issues requires much more than building a fence. It requires sensible immigration policies and working with other countries to improve conditions to reduce the impetus for immigration. Those things are hard, but effective. Building a wall is easy, but ineffective.’’

So what does immigration reform look like that is consistent with American laws and values?

As Moore and Limón point out, it means grappling with misery and violence that is so horrific that a mother in Honduras would risk rape, robbery and murder in the desert just to bring herself and her children to the United States. And that’s a tougher sell in a debt-ridden country that is growing ever isolationist and fatigued with the world’s problems at just the moment the world is becoming a lot smaller.

“You always have to get to the source,’’ says Limón. “Drug wars, extreme poverty – those are things we need to look to provide solutions for. And the U.S. doesn’t necessarily need to be the one that goes in and cleans it up. Countries need to come together. Wouldn’t it be wonderful if there were a summit and you had the leadership of Mexico, the United States and Central America – people with a heart to sit down and meet and say we have a problem. This is a world crisis taking place in our backyard.

“Our Statue of Liberty says ‘Give me your tired, your poor.’ There was a time when we were more welcoming and compassionate. We have to realize that this is not an El Paso problem. It’s not a United States problem. It’s not a Mexican problem. It’s our problem. We need leadership. Children are dying falling off the top of train cars in the desert trying to get here. The number of children crossing from Mexico has come as a result of the violence – especially in Juárez two or three years ago. Families are in fear for the lives of their children – and know that at least they would be safer in a detention facility here than where they’re at. Imagine as a parent having to make those decisions. It’s heartbreaking.’’

Building a bigger fence may play well around the cable-TV studio desks where pundits gather to yak in faraway New York and Washington. But down in El Paso, it’s a foreign concept.

Rick Brunson is an associate instructor of journalism in UCF’s Nicholson School of Communication. He can be reached at richard.brunson@ucf.edu.  This article was originally published on UCFToday.

Rick Brunson, 53, teaches reporting, editing and ethics in the journalism program at the University of Central Florida. He’s also a part-time production editor at the Orlando Sentinel, where he edits copy for print and online on the sports and news desks. Brunson joined the journalism faculty at UCF in 2003 after working for 19 years as a reporter and editor at newspapers in Orlando, Tampa, Daytona Beach and Charleston, South Carolina. In 2012, he served for a year as the writing coach at Orlando’s ABC affiliate, WFTV Channel 9, where he also wrote copy for the station’s newscasts and produced story packages for its website. In addition to teaching, Brunson serves as adviser to UCF’s chapter of the Society of Professional Journalists and in 2007 was the recipient of SPJ’s national David L. Eshelman Outstanding Campus Adviser Award. Brunson also was the recipient of two teaching and service honors at UCF: The Grasty Award for Teaching and the Teaching Incentive Program Award. In April of this year, he was promoted to Associate Instructor. Since 2010, Brunson’s teaching interest has shifted to mobile news production. He developed a Mobile Journalism course where students produce text, photo and video breaking news stories with their iPhones. As a result, he has taught “mobile best practices’’ workshops for the Association for Education in Journalism and Mass Communication, the Broadcast Education Association, EDUCAUSE and the Florida Scholastic Press Association. Brunson lives in Orlando with his wife, Ruthe, their son, Adam, and their dog, Sparky.