EL PASO — Shirt tucked in, apron on, sipping her morning coffee15 minutes past opening, Vanessa Parralounges on the restaurant’s takeout bench waiting for her shift to begin scrolling through the social media on her phone.

Briefly scanning the front entryway for any approaching guests, she couldn’t be any more prepared for the day’s lunch crowd.

But the unpredictability of the amount of income she will receive that day from tips worries her. It’s a constant worry. The job puts money in her pocket at all times and that is a plus, however, she never knows how much that will be.

And in 2014 that problem appears to be getting worse.

Some servers may have already become accustomed to what may come as a surprise to others — in 2014 the Internal Revenue Service will no longer allow restaurants to add a gratuity to the check, which is has been customary when serving larger groups. Vanessa Parra, a waiter with 12 years of experience, greets her first table of the day at BJ’s Restaurant & Brewhouse. Photo credit: Adrienne Acosta

The Internal Revenue Service made a significant revision to the 2012-18 ruling, changing the guidelines on what restaurants can declare as a tip. The ruling provides a clear description of what is acceptable. Automatic gratuities added to checks of larger parties can no longer be considered tips, but instead are viewed as service charges. Charges that require a guest to pay an additional percentage will be taxed as a wage, which means servers pay more taxes.

Parra, 30, a server at BJ’s Restaurant and Brewhouse says she’s now used to not receiving a gratuity with large groups. A 12-year server she’s waited on quite a few tables but the experience from all of them is the just same. Gratuity wasn’t always her major money-maker but she says it could be. Taking care of larger parties is different for her now since she is no longer guaranteed an exact tip.

“Now when you get sat with a table of 10 or more you’re kind of scared. You don’t know whether people are going to tip you or not. Some people at the table might, some people might not. It’s just kind of a gamble I guess,” Parra said.

Greg Levin, Executive Vice President & Chief Financial Officer with BJ’s Restaurants Inc. said, “BJ’s has already done away with gratuity for over a year now, back in 2013 when IRS auditing was put into action.” Levin noted he’s seen the impact not only in sales but in tip percentages as well.

“We run a tip analyses at the end of the year during the holiday season to see what tip percentages look like and we’ve found the percentages have been higher. That only means servers have really been trying.” 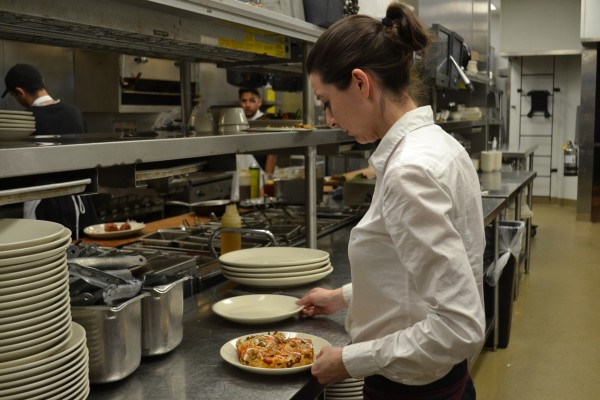 Levin believes because of the automatic gratuities have disappeared servers are left to face the insecurity of their service. The “safety net” as he called it, isn’t there anymore and servers are afraid to make mistakes.

Parra said she knows of a few other restaurants in the city that still add the gratuity to the bill, but she doesn’t want to “downgrade” to a slower paced restaurant. She said she has made about the same amount of money this past year as she did the year before. However, she sees her tables differently, she said, and like everyone else in the restaurant, she dreads taking care of a “big top.”

One of the locally owned restaurants, Geske’s, jumped aboard the gratuity bus this year, removing it completely. Well into their peak season, the wait staff says it has already started to feel the pinch and their confidence is slowly fading. Server Gustavo Ozuna, who is also a college student, says he’s seen a drastic change. “Being in a section where all you have are big tables, gratuity is where you make money.”

Ozuna says, “I’m going to continue to serve until I graduate, but it’s just one of those things you have to deal with.”

Geske’s large party manager, Alex Frescas, isn’t too happy that gratuity is no longer around. “It’s a little discouraging to servers…these servers they love their jobs and it sucks we have to go this route,” she said.

As Geske’s peak season is coming to an end the tip percentages have remained steady. The impact will not show until summer months roll around, when business slows down.

Servers in all types of restaurants are feeling the heat from this instability in their careers. Many of them have not switched jobs because all in all the money is great. Many restaurants have come around to add a “suggested gratuity” at the bottom of their customer’s check to remind them that the automatic gratuity no longer is enforced. Servers appreciate the suggestion more than not having anything at all.

Geske’s manager, Frescas said, “Sometimes people don’t know that these servers pay their bills with the tips they make, so the suggestion at the bottom helps to remind them what percentage they can leave if they liked their service.”

Adrienne is a Multimedia Journalism student at UTEP.