It is not uncommon to find notary services advertised with legal advice in El Paso, even though it is prohibited. (Vianey Alderete/Borderzine.com)

EL PASO — A “Now Renting” sign and an empty office is all Irma Castañeda found when she went to ask her immigration attorney how her deferred action petition was proceeding. She had paid the man who turned out not to be a lawyer at all $2000 to solve her immigration problem.

Had the scam never happened, Castañeda would be done with her deferred action process. In the meantime, she is not allowed to work and she is desperate because her husband was deported recently, the house he started to build for them at Horizon City is unfinished, and she cannot feed or provide any comfort to her two daughters — Rosalva, 12, and Jackeline, 9, who was born with a developmental disability.

According to immigrant advocates, individuals setting up phony legal offices on the bilingual U.S.-Mexico border are taking advantage of the frequent confusion between the term notario público understood to usually denote a lawyer in Mexico and notary public, which in the U.S. is a person with no legal training, with the very limited legal authority of a licensed notary public to basically attest to the validity of a signature on a document for a $6 fee.

As a consequence, this misconception often leads to cases of immigrants becoming victims of extortion from shady individuals passing themselves off as immigration attorneys.

“Undocumented immigrants are in desperate situations and end up seeking help from notarios and other persons who prey on persons in most need,” said Eduardo Beckett, a private attorney based in El Paso.

The powers and functions of a Texas notary public primarily consist of signing documents as an impartial witness. Their role specifically prohibits legal advising, and the authorizing or preparing any other legal documentation, including those pertaining to immigration law.

Three months before realizing that she had been scammed, Castañeda had started visiting the “promising immigration lawyer” her neighbor recommended. His office was only a few blocks away from the International Paso del Norte Bridge and the Consulate General of Mexico, in downtown El Paso. “I never suspected anything. There was always a long waiting line and people would say how he was a good lawyer and he had friends and contacts in the immigration office,” she said.

In order to become a notary public in Texas, the applicant must be at least 18 years of age, live in the State of Texas and be a legal resident of the United States and pay applicable fees. The accessibility of becoming a notary public is such, that an applicant interested in becoming a notary in the state of Texas can purchase an electronic application package from the National Notary Association official website, ranging from $108 to $185.

Without further education or a law degree, some public notaries advertise themselves as notarios públicos accepting money from immigrants. They make false promises of having the knowledge and the total capacity to seek relief from deportation, getting them work permits, residency or even naturalization that often leads to serious legal ramifications for the immigrant.

Searching for asylum away from an ever-increasing number of homicides — mostly of women — occurring near her home in the Valle de Juárez, Mexico, Castañeda first emigrated with her mother, sister and niece to Fabens, Texas, in 1999. After a confrontation with a classmate who physically bullied her for being an immigrant to the U.S., Castañeda along with her mother were arrested and deported in 2003. Notary public in the U.S. are not supposed to give legal advice for fill out forms. A local business in El Paso correctly advertises only translation services and filling forms. (Vianey Alderete/Borderzine.com)

“Notarios aren’t bound by ethics; attorneys are. We have to return our client’s phone calls; we have to use any client fees that they pay us responsibly and justify what they pay us. Notarios take your money and they run,“ said Melissa M. Lopez, Interim Executive Director of Diocesan Migrant & Refugee Services, Inc.
There is a painting of the Virgin of Guadalupe on a wall at the Diocesan Migrant & Refugee Services office. On that same wall, a notice from the U.S. Department of Justice, “’Notarios,’ Visa Consultants, and Immigration Consultants Are Not Attorneys.”

The lack of contracts, receipts, or retainer agreements from lawyers, attorneys, and public notaries is the biggest obstacle for victims of legal malpractice. To make a report, victims of fraud are required to show proof, (in this case, documentation) to the Better Business Bureau or any other government authority.

Adding to these misconceptions, many clients are victims of neighboring businesses they have been directed to by employees at the El Paso U.S. Citizenship and Immigration Services office, according to an immigration law attorney.

After he disappeared from his office, Castañeda saw the phony immigration attorney meeting clients at supermarkets and parking lots. He would run away every time she tried to approach him. Word of mouth led her to his new office, located in the same building as a national bank. It was there she found out from one of the people in the waiting line that he was not an attorney.

Without much time before her court date, Castañeda found legal assistance at a registered immigrant advocacy center. A licensed attorney informed her she could still file a report to the authorities against the scammer in order to help her case. As instructed by the attorney, the next day Castañeda visited the scammer’s office to gather other fraud victims.

According to Lopez, the most difficult process is reversing the legal damage of notario victims. “When people who live in the shadows file an application and it is not filed correctly, the consequence for them can be deportation,” she said.

As of November 2013, there are only seven recognized organizations and accredited representatives for immigration assistance in El Paso, according to the Department of Justice Recognition and Accreditation Program.

With plenty of opportunity to take advantage of unsuspecting undocumented immigrants, numerous notario offices are found inside the city limits. A few blocks away from the International Paso del Norte Bridge in downtown El Paso, most commonly known as Santa Fe Bridge, there are several businesses that advertise themselves in English and Spanish as public notary and notario público.

According to the Texas State Notary Bureau, public notaries are allowed to advertise their services in any language other than English as long as there is a clear notice of the public notary fees and the statement “I AM NOT AN ATTORNEY LICENSED TO PRACTICE LAW IN TEXAS AND MAY NOT GIVE LEGAL ADVICE OR ACCEPT FEES FOR LEGAL ADVICE.” According to the Tex. Gov’t. Code Ann. § 406.024, the fee a Texas notary public can charge for their first signature is $6, additional signatures are $1. A notary public charging more than the maximum fee is subject to possible criminal prosecution and suspension or revocation of the notary’s notary public commission by the Secretary of State’s office.

Notaries cannot charge for filling out forms, as it is prohibited for public notaries to give legal advice. The number of notary fraud cases or a complete list of names of notaries involved in this kind of activity are not offered or collected by the American Association of Notaries, nor the Texas Secretary of State. This information is currently lacking in El Paso, the state of Texas, and the nation.

Castañeda was able to find almost 20 fraud victims, “He (the alleged immigration attorney) was very loud and he yelled a lot. I was afraid he would come out of his office and see I was gathering people to fight against him,” she said. A report was made to the authorities, but no further investigation was done at the time, and the District Attorney Office and County Attorney Office could not take any action.

“[Notario fraud] is a big thing we have been seeing for a while, and it doesn’t seem to be a priority for law enforcement agencies here in El Paso,” said Christina Garcia, accredited representative at Las Americas, a non-profit immigrant advocacy center that has helped immigrants since 1987.

A few months ago, the phony immigration attorney was arrested by a federal agency, three years after the report was filed. It was discovered he was forging legal documents, and it was not the first time the former customs inspector had been arrested on federal charges.

Castañeda is still waiting for her deferred action and for her husband to come back home. In the meantime she is working cleaning houses and yards and selling homemade food, but she is on a constant watch for the authorities, or people not paying her at the end of the day.

Her daughters, both born in the U.S. receive food stamps and a check that she uses to feed them and pay for the gas to take her daughters to school and the youngest to the doctor. “I’m very frustrated with not being able to work and having to eat from the aid the government sends to my daughters. I am not like that, I’d rather go out to work, whether it is in the cotton or chili fields, than to be dependent on my daughters’ money,” she said. 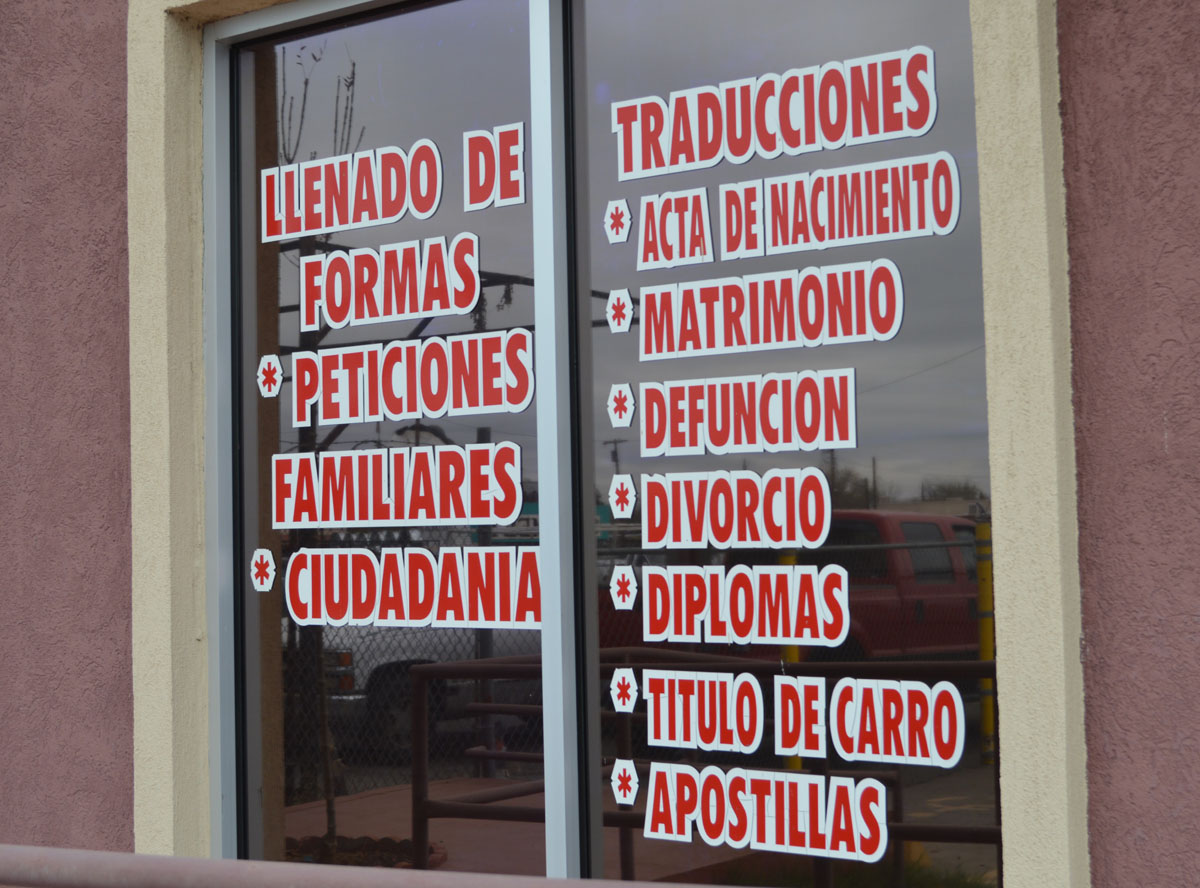 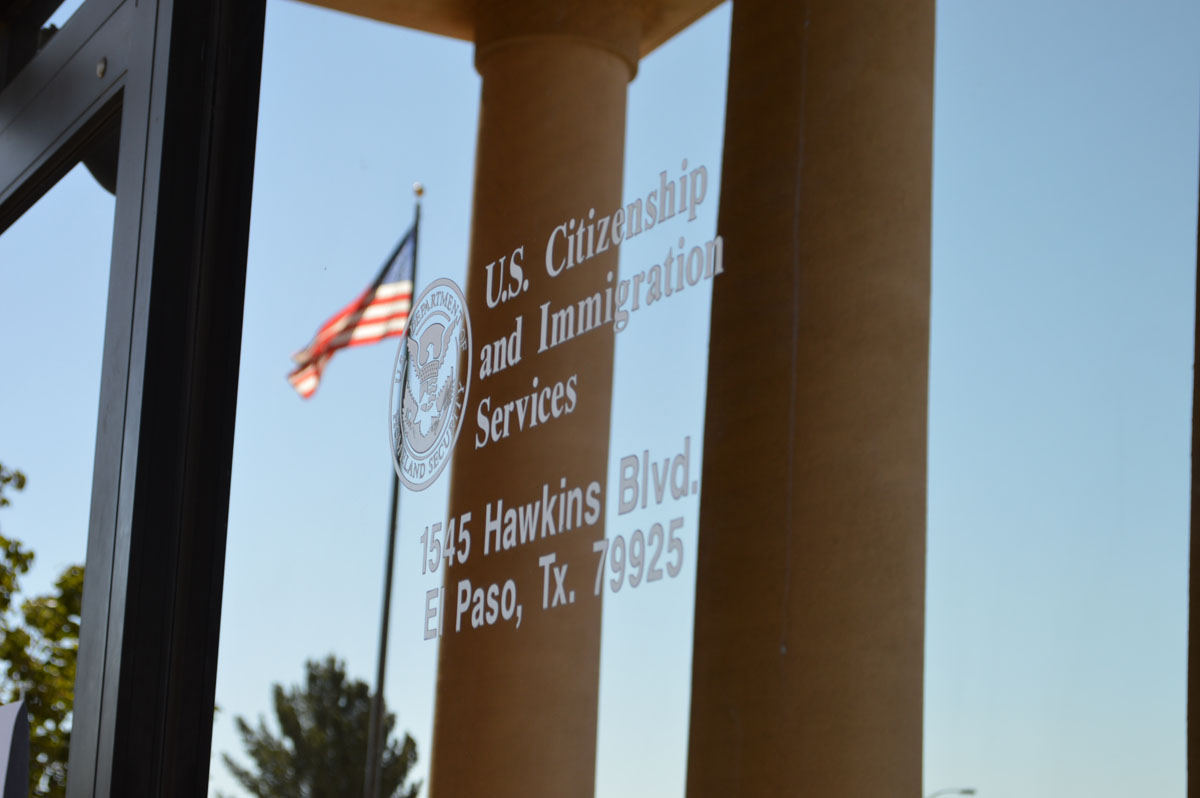 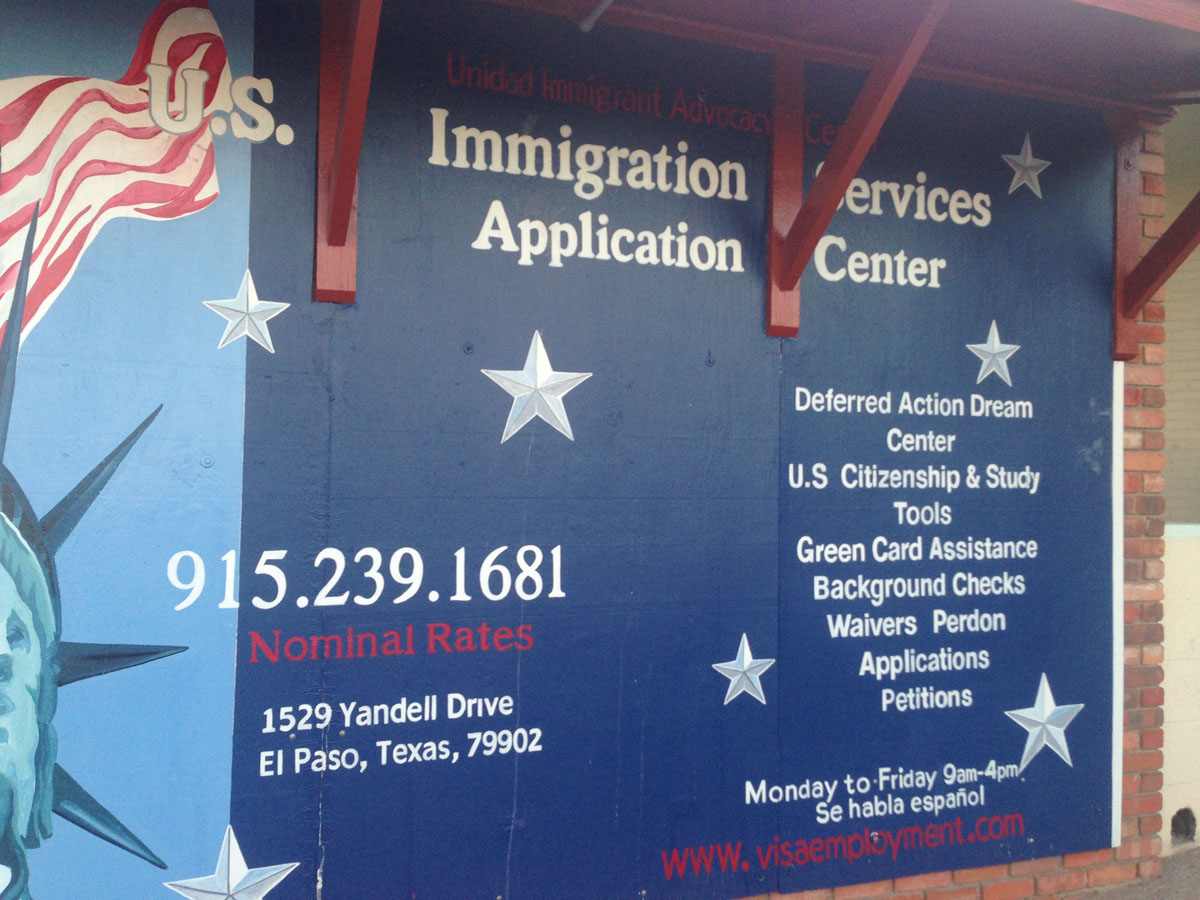 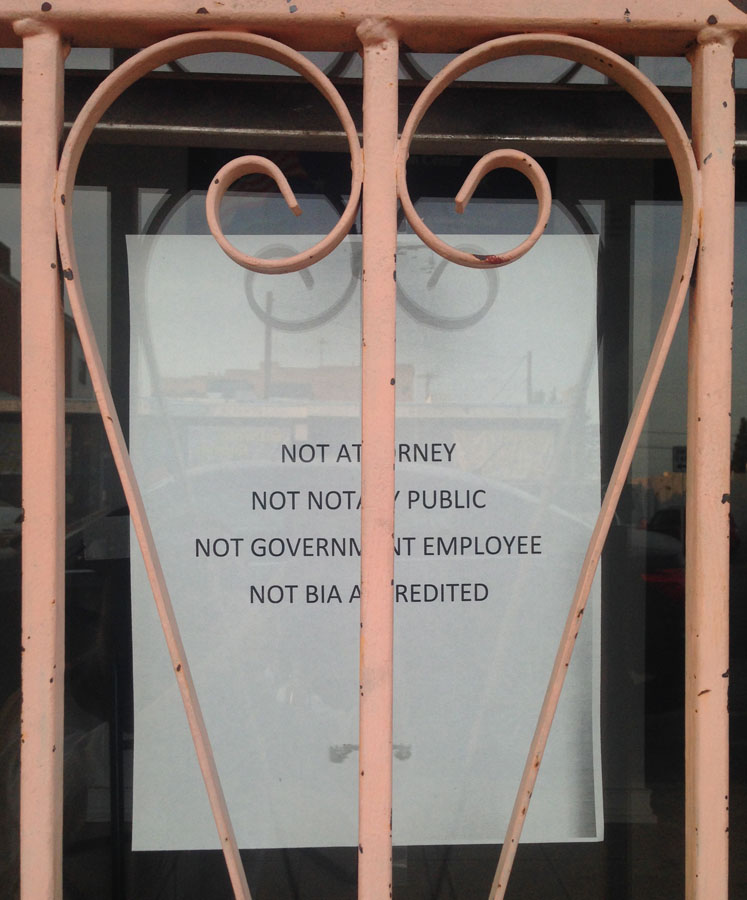 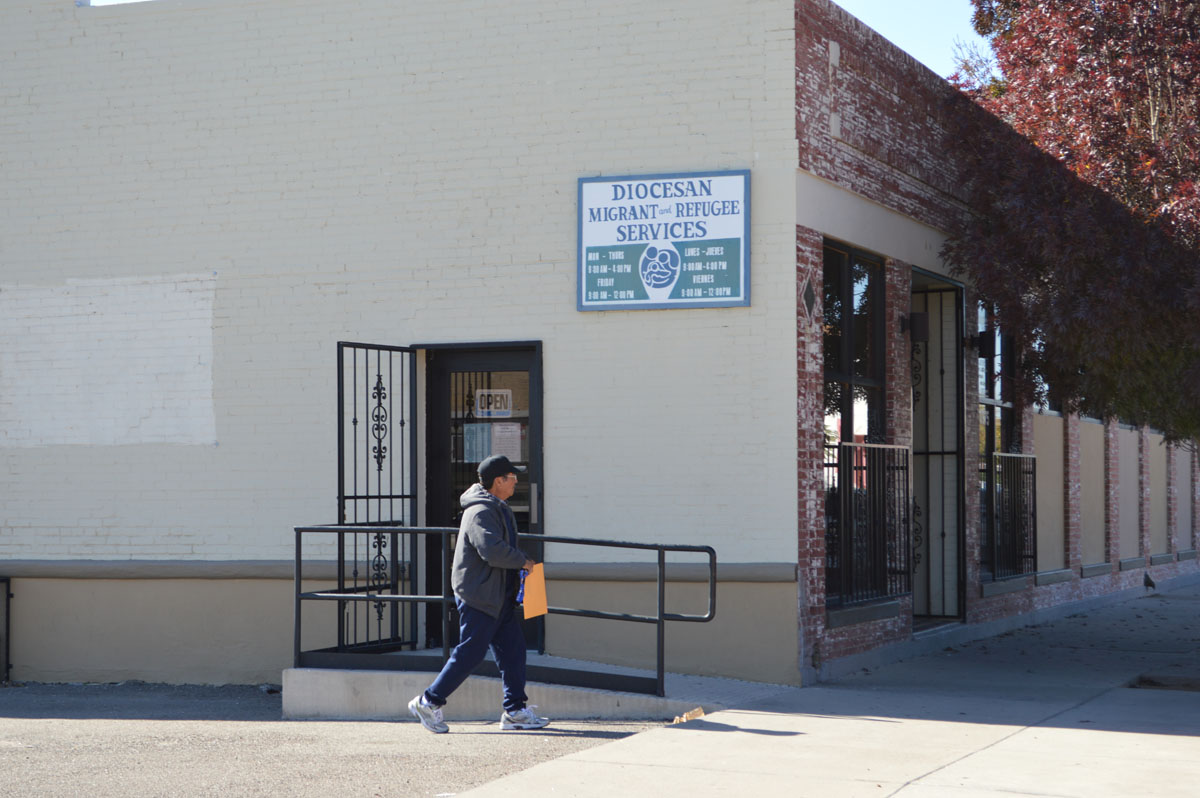