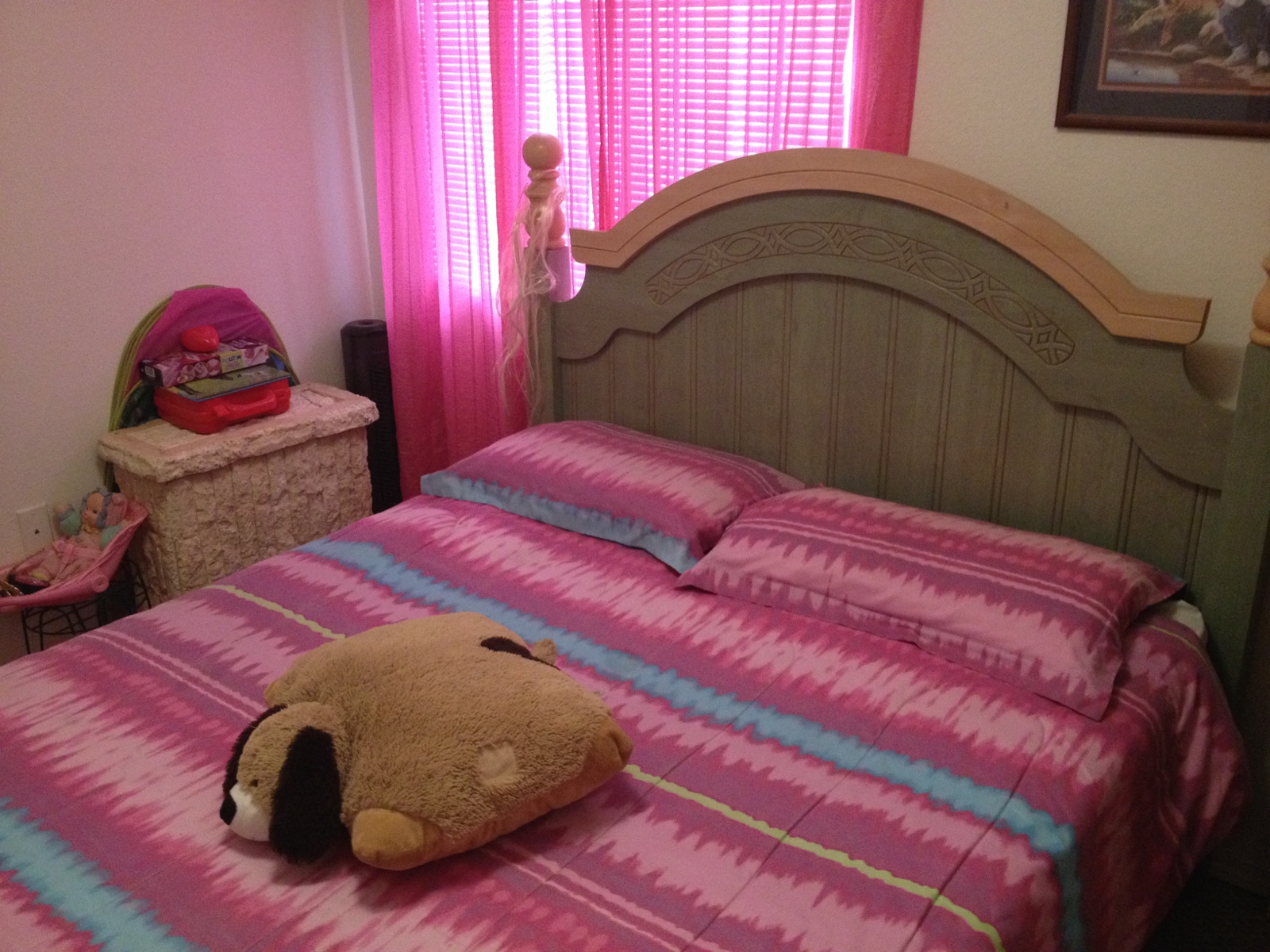 One of the rooms that "Ale" has. As her mother is in jail, her grandmother now has custody of her. But "Ale's" grandmother cannot take care of her all the time, she relies on the help of "Ale's" brother and aunt. With that she moves around between her grandmother's house, her brother's house, and her aunt's house (pictured here) and has a room in each house when she stays over. Photo credit: Joshua Espinal One of the rooms that “Ale” has. As her mother is in jail, her grandmother now has custody of her. But “Ale’s” grandmother cannot take care of her all the time, she relies on the help of “Ale’s” brother and aunt. With that she moves around between her grandmother’s house, her brother’s house, and her aunt’s house (pictured here) and has a room in each house when she stays over. Photo credit: Joshua Espinal

EL PASO — Aleseems like a typical five-year-old girl talking with her dolls, attending pre-k, and playing with all her classmates, calling each one of them her best friend.

As typical as she may seem, there is something about her that no one would discern by looking or even by talking to her. Ale, who shall remain anonymous at the request of her guardian, suffers from pediatric depression.

“It’s because sometimes I feel sad and mad. Sometimes I don’t feel happy,”said Ale, in a soft, hushed voice.

Pediatric depression, or major depressive disorder (MDD) in school-age children and adolescents, is a problem that not many people are familiar with, but which it is very real and according to many studies appears to be rising.

Dr. Neal Ryan, of the Western Psychiatric Institute & Clinic in Pittsburgh, says that those numbers are a bit exaggerated and that a more sizable number for MDD would be, “about two percent in school-age children and four percent in adolescents.”

Many parents refuse to believe that their children have this condition and sometimes even refuse help for them.

Gloria, who did not want to be identified, is Ale’s grandmother and legal guardian. She finds it hard to cope with the notion that her granddaughter could be diagnosed with something as heavy as depression at such a young age.

“It’s unbelievable that something this dark could be happening to mija,” Gloria said trying to gather words while holding back tears. She added that she thought this could only happened to adults. “I don’t understand how this can happen to someone so young and carefree.”

Ale was first diagnosed with MDD after her grandmother noticed that she started to act out in various ways, refusing to eat, getting constant bad behavior notes in school, and showing extreme mood swings on a regular basis. She was described as going from being happy one minute to angry less than a minute later and eventually bursting into tears for no apparent reason.

Gloria took her to pediatricians to see if there was something physically wrong with her, but Ale received a clean bill of health. She then sought help from a specialist in psychology. After giving her tests, he found that she had the early signs of MDD.

At the beginning, Gloria did not believe this diagnosis and did not want her granddaughter to receive psychiatric therapy.

“I refused to believe this diagnosis,” Gloria said defiantly. “I told the doctor that he was crazy and I left not wanting to return there.”

That is a common reaction most parents and grandparents have, according to Dr. Rodolfo Basurto a psychiatrist specializing in pediatric psychology, and an understandable one since it is difficult for them to believe that their children could suffer from something as serious as depression.

Experts in the field have found links between children who have MDD and suicidal behavior later on in life if the problem is left untreated. Studies have shown that any kind of treatment, whether it be therapy, medication, placebos, or both meds and monitoring combined, have lowered the symptoms of depression as well as the suicidal thoughts.

However, studies have shown that some of the medications used in treating children for depression (more specifically selective serotonin reuptake inhibitors or SSRIs) have in fact led more kids to suicide instead of preventing it. In the U.S., the only SSRI approved to treat childhood depression is fluoxetine.

Despite the approval, the Food and Drug Administration (FDA) performed clinical trials on the SSRIs, specifically fluoxetine, that demonstrated that signs of possible suicidal ideation and behavior in children specifically had, “…increased by 80 percent and agitation and hostility increased by 130 percent.”

As a result, the FDA has ordered pharmaceutical companies to put a black box label along with a patient medication guide on antidepressants meant for children to prevent misuse of the medicine. They advise that treatment should not just rely on the medication alone but should be include therapy.

Although Ale has not received medication yet to treat her depression, she is receiving regular therapy and there are signs of improvement. She is eating better and is behaving better in school, although she still gets the occasional notes from school. She is also behaving better at home, which comes as a great relief to her grandmother.

“It seems to be working and I will do anything to help out mija to be better, no matter what it takes,” Gloria said.