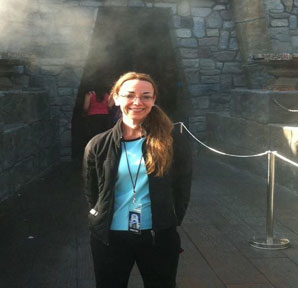 EL PASO — To most people Pancho Villa is a legendary character from Mexican history, but to Ruth McDonald, a professor at the University of Texas at El Paso, Villa is a real man who hurt her family when he kidnapped her great aunt in the early 1900s from the family ranch in Chihuahua, Mexico.

The great aunt was never heard from again but left an often-repeated story of male dominance and abuse that was told across the generations by the women in McDonald’s family.

Given her family’s experience of violence and injustice against women, McDonald has chosen to focus her teaching and writing on how some Mexican women are lured into sex trafficking and how young people in general struggle to survive daily under adverse conditions

A native of El Paso, she is well aware that fear, suspicion and brutal violence, as well as sex trafficking now overrun once commerce-friendly Ciudad Juarez.

She has devoted her career to educate students and the public about the plight of women who live on the Mexico side of the border and often uses real life examples in the classroom, like the recent sex trafficking court case in El Paso of Charles Marquez, who used ads in a newspaper and the Internet to recruit young women and children for sex trafficking purposes.

His arrest was part of “Operation Cross Country,” a national effort targeting underage prostitution that netted the arrests of 104 alleged pimps in cities across the United States, according to law enforcement officials. Marquez was convicted and now faces up to 20 years in prison.

According to McDonald, there are no accurate estimates of the number of children engaged in prostitution in the United States but approximately 293,000 American youths, ages seven and over, are currently at risk of becoming victims of commercial sexual exploitation.

“Majority of these victims are runaway or thrown-away youths who live on the streets and become victims of prostitution,” she said. “These children generally come from homes where they have been abused or from families who have abandoned them. Often, they become involved in prostitution to support them financially or to get the things they feel they need or want (like drugs).”

According to McDonald, sex trafficking victims are not usually found during raids or serious investigations but instead are “discovered when a stranger, who was knowledgeable about trafficking, has suspicions and tips off law enforcement.

“Public awareness is incredibly important, tips come from normal people who just see strange things, and then law enforcement steps in and solves the case,” she said.  “One of the most important things people can do is just be vigilant and that could save thousands of lives, literally.”

“Sex trafficking is a concern in our border city. El Paso has been a gateway for sex trafficking,” said McDonald, whose roots are Irish/Hispanic and has taught women’s studies and religious studies at UTEP for seven years.

“Recently the I-10 corridor between El Paso and Houston was identified as the main human trafficking route, and Houston is recognized as one of the main hubs and destinations for traffickers,” she said.

Her extensive reading into the issue of sex trafficking revealed that Houston is well known as a set up for “training brothels,” locations where women are held until they are sent out to work as prostitutes.

According to McDonald, victims of sex trafficking can be women or men, girls or boys, but the majority are females. “There are a number of common patterns for luring victims into situations of sex trafficking, which include a promise of a good job in another country, a false marriage proposal turned into a bondage situation, being sold into the sex trade by parents, husbands, boyfriends and being kidnapped by traffickers,” she said.

“Sex traffickers use a variety of methods to condition their victims,” she said, adding that the methods include starvation, confinement, beatings, physical abuse, rape, gang rape, threats of violence to the victims and the victims’ families, forced drug use and the threat of shaming their victims by revealing their activities to their family and their family friends.

“Victims may also suffer from traumatic bonding – a form of coercive control in which the perpetrator instills in the victim fear as well as gratitude for being allowed to live,” said McDonald, who still has family living in Mexico.  Victims of trafficking are also often forced into various forms of commercial sexual exploitation including prostitution, pornography, stripping, live-sex shows, military prostitution and sex tourism.

McDonald emphasizes that victims trafficked into prostitution and pornography are usually involved in the most exploitive forms of commercial sex operations. “Sex trafficking operations can be found in highly visible venues such as street prostitution, as well as more underground systems such as closed-brothels that operate out of residential homes,” she said.

Sex trafficking also takes place in a variety of public and private locations such as massage parlors, spas, strip clubs and other fronts for prostitution, according to McDonald. Victims may start off dancing or stripping in clubs and then be coerced into situations of prostitution and pornography, she added.

A pimp can make $150,000-$200,000 per trafficked child each year and the average pimp has four to six girls working for him, according to law enforcement and advocacy groups. The average victim may be forced to have sex up to 20 times a day.

McDonald said she hopes to obtain a doctorate in Communication in Media and Women’s Studies and continue to study the sex trafficking issue. Hoping that her efforts to educate her students on the adult entertainment industry and its relationship to sex trafficking.

“This form of cruel modern-day slavery occurs more often than many people might think. And, it is not just an international or a national problem—it also is a local one. It is big business, and it involves a lot of perpetrators and victims.”