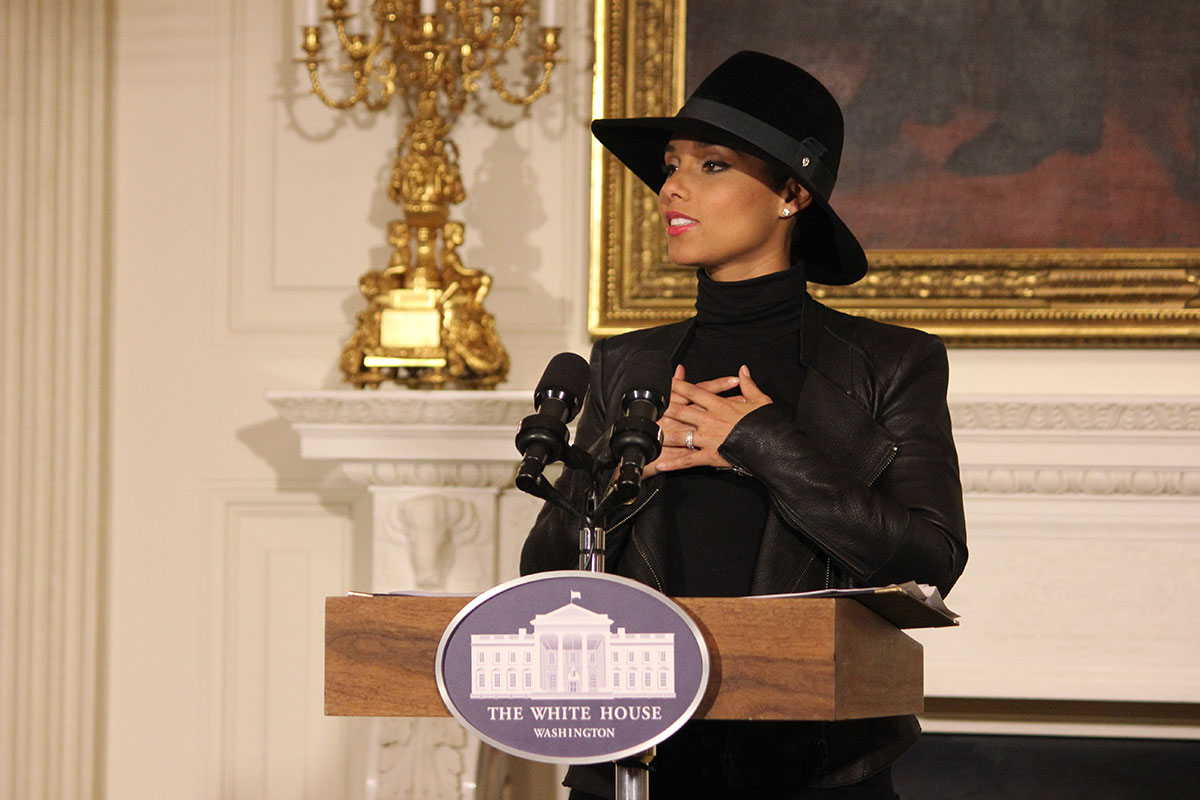 Alicia Keys says reading the script for “The Inevitable Defeat of Mister and Pete” was heart wrenching. She was a co-producer of the film that tells the story of two boys growing up in the Bronx. (Alejandro Alba / SHFWire) Alicia Keys says reading the script for “The Inevitable Defeat of Mister and Pete” was heart wrenching. She was a co-producer of the film that tells the story of two boys growing up in the Bronx. (Alejandro Alba / SHFWire)

WASHINGTON – Michelle Obama brought a backup to a film screening at the White House Wednesday as part of her campaign to encourage children to go to college.

Singer and songwriter Alicia Keys co-produced the film, “The Inevitable Defeat of Mister and Pete,” which a group of teachers and other educators watched and discussed.

Keys and a teacher led a discussion of the film, and Obama talked to the crowd about her reaction to the film.

“The minute I got through watching this movie, I said, ‘I’m going to screen it at the White House,’” Michelle Obama said. “This is the movie that should begin the conversation that is already happening on what it is we have to do to invest in kids in this community.”

The film tells the story of two grade-school boys who are living with the day-to-day struggles of fending for themselves in the Bronx. It is a coming of age story starring Jennifer Hudson, Jordin Sparks and Jeffrey Wright.

Obama said the film and the event can contribute to the effort to increase education levels in high-poverty areas.

“There is no one who can make it alone, no one in this whole world, especially our kids,” Keys said. “That is where education comes in and the access to quality, unbiased education, specifically higher education. It creates a pathway out of poverty. It creates unlimited possibilities.”

President Barack Obama and the first lady have been discussing education recently and will meet with college presidents Thursday at the White House. “That’s why he’s set a goal that by the year 2020, our country would once again have the highest proportion of college graduates in the world,” Obama said. “He wants to get us back on top.”

As part of the North Star Goal, an initiative that President Obama created, both the president and the first lady have hosted events that challenge educators to support and recruit more undeserved young students.

“We all know that these kids could be the next generation of workers and innovators and leaders,” Obama said. “They could be building the businesses and making the discoveries and enriching the communities that will fuel our economies for decades to come.”