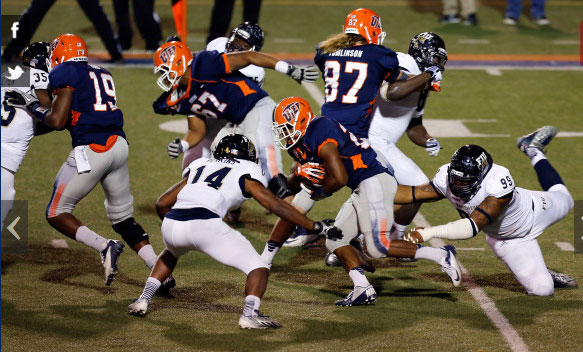 EL PASO — Any athlete can suffer some type of brain injury in a game or in practice during a career especially in the very competitive college and pro sports.

Most athletes get concussions, but they are usually unaware of the injury, so they continue to play. But today, any symptoms are taken very seriously by trainers and coaches to make sure that their players are safe.

Some symptoms that should be flagged right away are headaches, fuzzy or blurry vision, nausea and vomiting, dizziness, sensitivity to light or noise, balance problems, or fatigue lack of energy to do anything.

Other symptoms include emotional problems such as easily getting upset, sad, nervous or anxious. There are many things that need to be looked at when someone suffers a blow to the head. Even if it is just one symptom out of all these, it needs to be checked out right away because that one symptom can lead to more severe ones. A concussion can’t go without being treated.

“If any of the players feel any of these symptoms they are to report to me so that we can see if things don’t get worst and to check to see if they’re OK,” said Dawn Hearn the head athletic trainer at the University of Texas at El Paso.

Concussions don’t practice age discrimination. Children can have the same symptoms of concussion as older children and adults. But sometimes it can be hard to tell if a small child has a concussion.

Young children may also have symptoms such as crying more than usual, headaches that don’t go away, changes in the way they play or act, changes in the way they eat, or sleep, being upset easily or having more temper tantrums, a sad mood, lack of interest in their usual activities or favorite toys, loss of new skills, such as toilet training, loss of balance and trouble walking and not being able to pay attention. A lot of the symptoms are the same.

“Having a concussion is the worst feeling I experienced since I’ve played sports and when it happened I followed all the steps so that I can get back on the field to play football again,” said Jacob Garcia wide out for UTEP.

Every year there are physicals for athletes at the college level and in that physical, the athlete is required to take a SAC (Standardized Assessment of Concussion) test. A SAC test is a test where questions are asked such as what month is it? Or what day it is. There is also a section for memory. A list is given and the athlete has to recollect what was said.

In the end there are four different tests — orientation, immediate memory, concentration and delayed recall. A score is then totaled up and if a concussion is detected the test is given to them again and an ImPACT test is required.

Once the athlete has passed the ImPACT testing they are released to play. There are times when it could take a week to pass it or there could even take months. An athletic trainer, school nurse, athletic director, team doctor or psychologist can administer imPACT, provided that they have completed training in the administration of the test.

UTEP Trainer Miles Wilcox explained that the trainers go through this training to ensure that the athletes about to return to play are in good health.