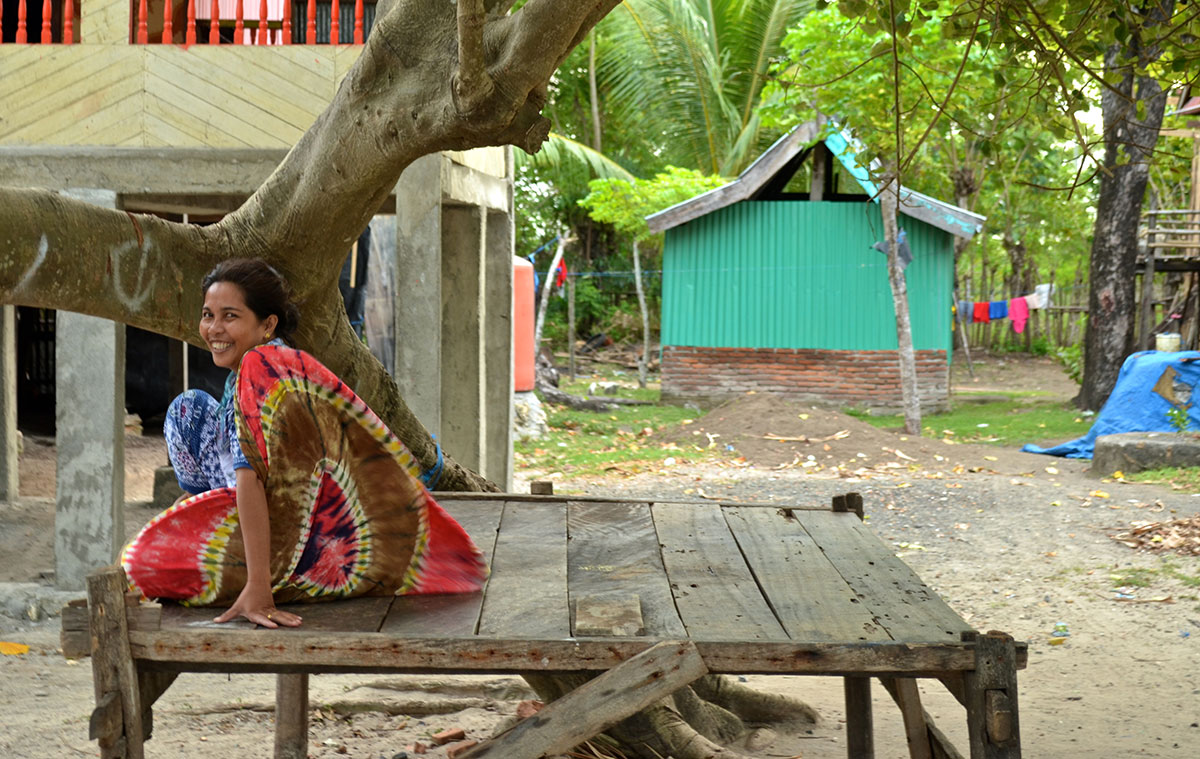 Indonesian woman outside her home in Sulawesi, Indonesia. (Valeria Hernandez/Borderzine.com)

EL PASO – I opened my eyes and immediately felt the heat of my bed sheet and the mosquito net on my face, the wooden roof seemed like a stranger I saw for the first time, and the mattress I lay on felt unfamiliar. It took me a few seconds to remember that I wasn’t in my room in El Paso, Texas, but rather in a local family’s traditional Islamic home in Bali, Indonesia.

This past spring I was admitted into the Indonesia Study Abroad Program, led by Dr. Stacey Sowards, Chair of the Communication Department at the University of Texas at El Paso. Along with 12 other students and four faculty members, I spent three weeks in Indonesia and had the opportunity to observe the environmental conservation programs that the non-governmental organization Rare and the University of Mulawarman run in the island.

According to its website, Rare “trains local conservation leaders all over the world to change the way their communities relate to nature…inspiring people to take pride in the species and habitats that make their community unique, while also introducing practical alternatives to environmentally destructive practices.” Indonesian woman outside her home in Sulawesi, Indonesia. (Valeria Hernandez/Borderzine.com)

Leaving the country for the first time in my life made my mind race a million miles per hour. I had a billion questions regarding what we’d be doing, if I’d make any friends and how I’d feel about being so far away from home on my own for the first time.

We traveled for about 27 consecutive hours, as we made our way from the El Paso to Los Angeles, then to Hong Kong and finally arriving in Jakarta. Once in Jakarta, we entered the airport terminal and my eyes darted from left to right as they tried to take the whole picture in at once. The terminal was alive with the sounds of loud chatter in a language I did not understand, except for the words, “Taxi! Taxi!” that came at us from all different directions.

We exchanged our U.S. dollars for Indonesian Rupiahs, which ran at 9,700 rupiahs per U.S. dollar at the time, and proceeded to walk towards the large crowd of staring eyes leaned up against a metal barrier. The jetlag didn’t set in until later that night when my head bobbed front and back from exhaustion during our unusually quiet dinner.

Our short adventure in Jakarta consisted of visiting the National Monument, Old Town Batavia, and the pier. In Old Town Batavia, we met Aldy Sanjaya and his brother, who showed us their traditional, handmade puppets. We also visited the school President Obama attended when he was a boy living in Indonesia.

It is incredible to see the contrast between the older area of Jakarta, where the streets were narrower and packed with cars and vendors incessantly knocking on your window, and the newer part of the city where the upscale Grand Indonesia Shopping Town is home to brand names like Chanel.

We also visited several national parks during the trip, including Bukit Bangkirai, West Bali National Park and Kutai National Park and also attended a four-day workshop held by Rare in Sulawesi. Spending the night in Kutai is one of the most important memories from the trip. I had never gone camping before, let alone spending a night in a tropical rainforest and I’ve always had the privilege of living a comfortable life. As the trip pushed me to overcome my fears, eating foods I’d normally not dare go near and putting up with clouds of bugs every single day became routine. But I was still deeply anxious about spending the night in Kutai National Park.

Our day began at 5 a.m. when we drove from Sangatta to the Kabo Pier, from where we took a 25-minute boat ride on the Sangatta River to Prevab. During our day at Prevab, the second tourist area in Kutai, we took three hikes through the different trails in the rainforest. During our second hike, we spotted two pairs of female orangutans and their young up in the trees foraging for food.

The rainforest was immense and extremely green. Coming from the desert, I had never seen so much green in my life. It was as if the trees hugged me everywhere I walked and the music of the forest was incessant. The birds sang and the wind accompanied their melody, while the leaves danced to the rhythm.

With my head tilted almost all the way back, I stared through the thick branches and green leaves at the baby orangutan hanging on a branch, staring back at us. His mom foraged for food on a nearby branch, according to what I saw through my Nikon 300-500 mm lens.

I also had the opportunity to plant a tree in Prevab, leaving the perfect mark in the rainforest. It was exciting to think that years down the line my tree will grow to be as tall as the other trees that towered above the ground. As I sat on the rocking motorboat on the way back to civilization, I shot one last glance at the large wall of trees waving goodbye at me, and wondered if I’d ever be back. Kids playing on the water in the coast of Sulawesi, Indonesia. (Valeria Hernandez/Borderzine.com)

In Bali, we visited Sumber Klampok, a remote village that is home to the local Rare Pride campaign aimed at restoring the numbers of the Balinese Sterling, an endangered bird species that is native only to Bali.

The Rare campaign in Sumber Klampok is led by Pak Ismu and along with twenty other members of the community and their families, they host and breed Balinese Sterlings in their home from birth until they are ready to be released into the wild.

Part of the Sumber Klampok Rare campaign is the home-stay, also carried out by the same members of the community. I lived with Pak Syamsul and his family and three other UTEP students for four days and this changed my outlook on life.

Living with Syamsul and Ibu Suhaena and their family opened my eyes to a different way of living. Here in El Paso, most of us are used to having a connection to the rest of the world through Wi-Fi, be it through our laptops, smartphones or tablets. In Sumber Klampok, I was disconnected from everything for the entirety of our stay. But I forgot about all that the moment I reached the colorful underwater drop-off on our snorkeling trip and saw all the different fish species swimming right next to me.

Ismu’s and our host families’ hospitality can’t go unmentioned because it was superb; regardless of the language differences, a connection was made. The homemade traditional Indonesian dishes we were served for breakfast, lunch and dinner are unforgettable. Even almost six months later, I still crave Ibu Suhaena’s tempeh, fried rice and tofu. Little girl on the coast of Sulawesi, Indonesia. (Valeria Hernandez/Borderzine.com)

We also made a stop in Sulawesi, in PPHL Puntondo to be more specific. It is a recreational facility equipped with dormitories, an auditorium, a kitchen, cafeteria and even a library, in which Rare held a four-day workshop with members of Rare Pride campaigns from all over the region. It is built up high and is home to beautiful sights due to its proximity to the shore of the Java Sea.  Wooden bridges connect its different facilities.

A lot of the trip consisted of driving from location to location and the roads were almost always full of mopeds. The winding, two-lane roads between Balikpapan and Samarinda in the island of Borneo hold so many memories of amusement, curiosity and even fear. Our driver reached speeds of 100 km/h at one point during the 122 km journey from Balikpapan to Samarinda on that rainy night.

We reached our destinations safely during the entire trip, regardless of ambiguity of plans or schedules, and enjoyed the unknown for the most part.

What I learned, how I changed and what I saw on this three-week trip, cannot simply be summed up in a few words. I’m forever grateful to Dr. Sowards for the opportunity I got to change the way I see the world and the creatures we share it with.