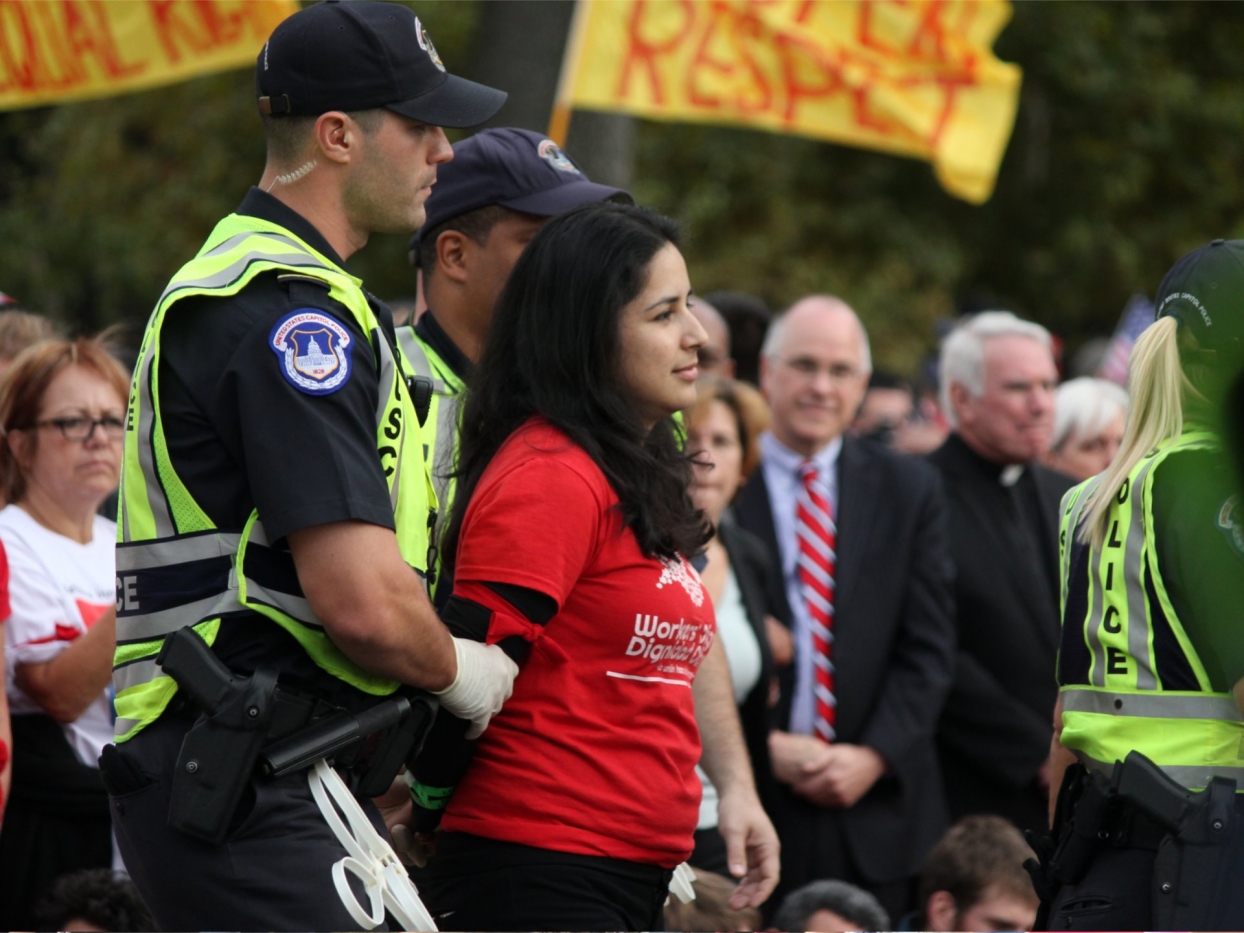 Brenda Perez of Nashville, Tenn. is arrested on First Street after protesters marched to the Capitol Tuesday. Perez was part of a group of three activists from Workers Dignity from Nashville who were arrested for civil disobedience. (Andrés Rodríguez/SHFWire) Brenda Perez of Nashville, Tenn. is arrested on First Street after protesters marched to the Capitol Tuesday. Perez was part of a group of three activists from Workers Dignity from Nashville who were arrested for civil disobedience. (Andrés Rodríguez/SHFWire)

Perez, 29, was one of about 200 protesters arrested during an October 8 half-mile-long march from the National Mall to the U.S. Capitol Building. Her crime: impeding traffic, an act of civil disobedience. She and a group of protesters sat on First Street and did not move despite police orders.

“The goal isn’t to be arrested,” said Perez, who is originally from Matamoros, Mexico and was brought to the U.S. when she was 6 years old. “The goal is to raise awareness for the issue and that (fear of the police or deportation) cannot be a tactic anymore.”

Civil disobedience—the refusal to obey laws as a way of forcing the government to act—was held in high regard as a tactic in both the Civil Rights and Chicano movements of the 1960s.

The October 8 march in D.C. was one of two large protests and many smaller acts of disobedience that have taken place this year in Washington, according to officials. Another large rally took place on April 10 when more than 10,000 gathered on the Capitol grounds to call for immigration reform.

Most experts agree that the growing practice of immigrants’ rights organizations of using the civil disobedience tactic is a smart move, even though immigration reform will not pass in 2013 and, some argue, even in 2014, officials said.

The October 8 march in the nation’s capital gathered 15,000 persons, some members of Congress and also some undocumented immigrants. Taking a page from the civil rights movement, several congressmen were arrested along with the protesters.

Rep. Luis Gutierrez (D-Ill.) was among them.

“Civil disobedience calls attention to an issue in a way that a simple letter or rally or press conference does not,” said Douglas Rivlin, director of communication and a spokesman for Gutierrez. “It says you are willing to risk arrest and a loss of your own freedom—even if temporarily—in order to fight for the freedom of others.”

The congressman has been arrested five times since 1999 in acts of civil disobedience, three of which were on behalf of immigration reform. Rivlin said there is powerful symbolism in getting arrested for a cause, considering its history and effectiveness in Birmingham, Alabama during the civil rights movement, in Soweto, South Africa during the anti-apartheid movement and more recently in South Asia over pro-democracy reforms.

Gutierrez’s October 8 arrest was an attempt to bring immigration reform back into the House’s radar.

House Speaker John Boehner (R-Ohio) said on November 13 that the U.S. House would not pass an immigration reform bill this year.

The reform legislation has been stalled in Congress since the bipartisan bill was passed in the Senate in July. The House has yet to vote on the legislation and has taken a piecemeal approach to enact portions of the bill.

Some parts of the bill passed by the House Judiciary Committee include the Agricultural Guest worker Act, the Legal Workforce Act, the Strengthen and Fortify Enforcement Act and the Supplying Knowledge-based Immigrants and Lifting Levels of STEM Visas Act.

Muzaffar Chishti, director of the Migration Policy Institute’s New York office, said he does not think the House will take up immigration reform in 2014 either because of political divides, including a Republican-majority House.

On the positive side, he said, the protests force legislators to pay attention to the issues at hand and listen to ordinary citizens rather than lobbyists. A downside is that acts of civil disobedience are hard to control.

“It is very difficult to contain,” he said. “Decision-making is harder and you risk losing the message of the campaign.”

Perez said her group, Workers Dignity, based in Nashville, Tenn., was aware that they risked an ensuing chaos.

She said before she and other protesters took a seat on the street, they discussed their tactic and made sure there was solidarity within the group.

“We wanted to make sure no one had infiltrated our group,” Perez said. “The point of civil disobedience is that it has to be peaceful. Violence would take the spotlight away from the issue.”

Among the protesters arrested October 8 were members of CASA de Maryland, an immigrant advocacy organization based in Silver Springs, Md.

Shola Ajayi, advocacy and elections specialist at CASA, said protesters take a big risk when they decide to participate in an act of civil disobedience, but are usually aware of the consequences.

“It is a sacrifice and a strong commitment to the cause,” Ajayi said. He said CASA activists usually consult with a lawyer or police officials before they participate in disruptive actions. Activists without papers are encouraged to find a friend to protest in their name to protect the undocumented from deportation.

“Both movements are about bringing equality and accessibility to the American system to all minorities and everyone who lives within this country,” he said.

On November 12, a public fast began on the National Mall. Many faith leaders spoke in support of the activists, including Rev. Noel Anderson, Church World Service’s grassroots coordinator for immigrant rights.

Anderson was previously involved with the Angeles del Desierto movement in California, where activists would leave gallons of water in the desert for those trying to cross the border.

He said that although he supports acts of civil disobedience, it takes a myriad of tactics to achieve a goal.

“We’re following the steps of so many others before us,” Anderson said. “There is about a 1,600-year history of prayer fighting and civil disobedience in the Old Testament. We’re also following in the tradition of (Mahatma) Gandhi, Cesar Chavez and Martin Luther King.”

Perez spent a total of five hours in the D.C. jail cell. Many of the 200 arrested were released between 4 a.m. and 6 a.m. She said she worried the arrest might undermine her temporary legal status because she recently received deferred action papers that allow children brought to the country illegally to stay and work legally for two years.  But thus far she said there haven’t been any repercussions from the arrest.

She said the people arrested with her who were undocumented showed the most strength inside the jail.

“What we’re really fighting for is equality,” she said. “It’s the fight for tuition equality, the fight to make minimum wage, to vote. This is a fight for dignity.”