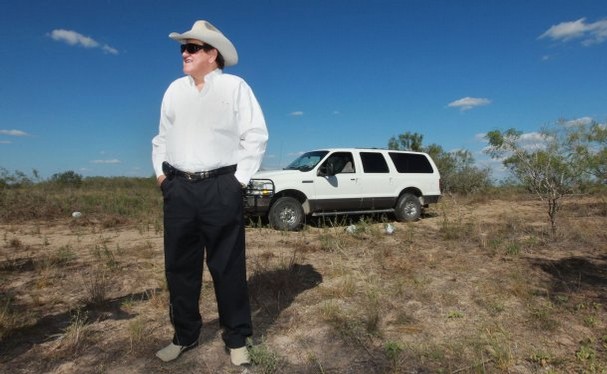 LaVoyger Durham said he put up the first water station for migrants in Brooks County on the 13,000-acre Tule Ranch, which has seen at least seven dead since 2011. He said regardless of anyone's stance on immigration, preventing deaths is the right thing to do. (TODD YATES/CALLER-TIMES) LaVoyger Durham said he put up the first water station for migrants in Brooks County on the 13,000-acre Tule Ranch, which has seen at least seven dead since 2011. He said regardless of anyone's stance on immigration, preventing deaths is the right thing to do. (TODD YATES/CALLER-TIMES)

BROOKS COUNTY — For the first time, an aid group is deploying water stations in the Brooks County brush in an effort to prevent migrant deaths, and finding creative ways to work with private ranchers who don’t usually fling the gates wide for outsiders.

It’s a fledgling movement — only two stations are in place so far — but the rising interest from human rights groups is another indicator of the mounting death toll. It is also a sign of Brooks County’s emergence as a kind of new Sonoran Desert, where water stations have long been a fixture in southern Arizona.

As migration patterns and U.S. border enforcement strategies have changed, the migrant trail has shifted, too, leading them on foot through the county’s barren, 944 square miles of private ranches to avoid the Border Patrol checkpoint south of Falfurrias.

Nearly 80 bodies have been recovered in the county in 2013, approaching the record 129 in 2012. In Southern Arizona, the Pima County Medical Examiner’s Office, which records most migrant deaths in the state, lists 153 bodies recovered this year.

Deaths of undocumented immigrants near the U.S.-Mexico border have increased even as indicators of overall immigration dipped with the U.S. recession. Most deaths are attributed to dehydration and exposure.

“We want to set up water stations countywide so we don’t have the deaths,” said Eddie Canales, founder of the new South Texas Human Rights Center and a director of the National Network for Immigrant and Refugee Rights.

South Texas, like Arizona, has remote terrain that’s hard to navigate and hard to reach, even on four-wheel drive. But some of the biggest obstacles for aid groups aren’t physical.

“Ranchers are a little more skittish about the politics of this than are federal and state land managers in Arizona,” said Robin Hoover, a Disciples of Christ church pastor and activist with a focus on reducing border deaths.

“They’re real pro-law-enforcement, but there’s also some sentiment that, well, it doesn’t matter, nobody deserves to die.”

Politics aside, while some ranchers still run cattle, the big moneymaker now is live game, so migration poses a number of problems for business.

Landowners worry about encounters between their guests and the brush guides who lead migrants, who may be affiliated with transnational gangs and may be armed. Water stations could be seen as encouraging migration, which leads to torn-down fences and escaped game and livestock. And some land managers are wary of giving humanitarian groups free rein on their property, because it is easy to get lost, radio and cellphone reception is poor to nonexistent, and bullets fly during hunting season. Discarded water jugs and other belongings are left behind by migrants on the El Tule Ranch in Brooks County, where 77 people have died in 2013, usually from dehydration and exposure. Ranch manager LaVoyger Durham said he put up the first water station for migrants in Brooks County in an effort to prevent deaths. (TODD YATES/CALLER-TIMES )

“We’re already in a position of liability. Why do we want to add on to that?” said Susan Durham, director of the South Texans’ Property Rights Association. The group has advocated for national immigration reform with a strong border security component.

Yet Canales has found a way to make inroads where others, including Hoover, failed: He delivers the equipment to the ranch gate, then lets the rancher deploy it. The water station is a 55-gallon plastic barrel filled with gallon water jugs, with a tall blue pennant to make it easy to spot above the scrub brush. Canales or another volunteer returns to the ranch as needed to drop off more water jugs for restocking.

Durham’s husband, LaVoyger Durham, who manages the sprawling, 13,000-acre El Tule ranch, said he was the first to accept the arrangement. The remains of at least seven people have been recovered there since 2011, according to sheriff’s reports. Durham said he’s seen 25 discovered in his 23 years there.

He would rather have more robust security to stem the flow of migration — double or triple the border wall, he says — but in the mean time he doesn’t want to see anyone die on the ranch. He said other ranchers questioned him, taking a “let ’em die” stance.

“I think they were scared I was helping these illegals become illegal,” he said. “I shut them up and said, ‘Look … I’m only a human being and for the past two years I’ve been trying to expose the killing fields of South Texas.’”

Durham believes the water stations will catch on. Half of the water in his station — about three gallons — was consumed in the first month, which for the large part was overcast and rainy. But Texas still is deep in drought.

Canales said he is making headway. He was to meet with the owner of one of the county’s largest ranches Monday.

“It does take relationship building,” he said. “You have to build that confidence with people. I think eventually it will come.”

He hopes to officially launch the South Texas Human Rights Center in a building near the Brooks County Courthouse in Falfurrias in early November and is taking donations through his website.

John Hunter has high hopes that deaths will be prevented as water stations become more common in Brooks County. In 2000, he launched Water Station Inc., covering about 200 square miles of desert frequented by migrants in Southern California. He said he has seen other private land owners come to accept water stations even if they were staunch immigration opponents. The nonprofit maintained about 340 stations during the peak migration in California. It now has about 140.

Another group, Humane Borders, maintains about 35 stations in Arizona.

Hunter has struggled to take politics out of the equation, not advocating for any type of reform over another. He said his group has people on the left and the right who set their ideologies aside.

“My kids think I’m a liberal,” he said. “I’m for life. I believe in the sanctity of children and old people. I also think it’s important for people that are poor, that you don’t kill them either, just because they’re economic refugees.”