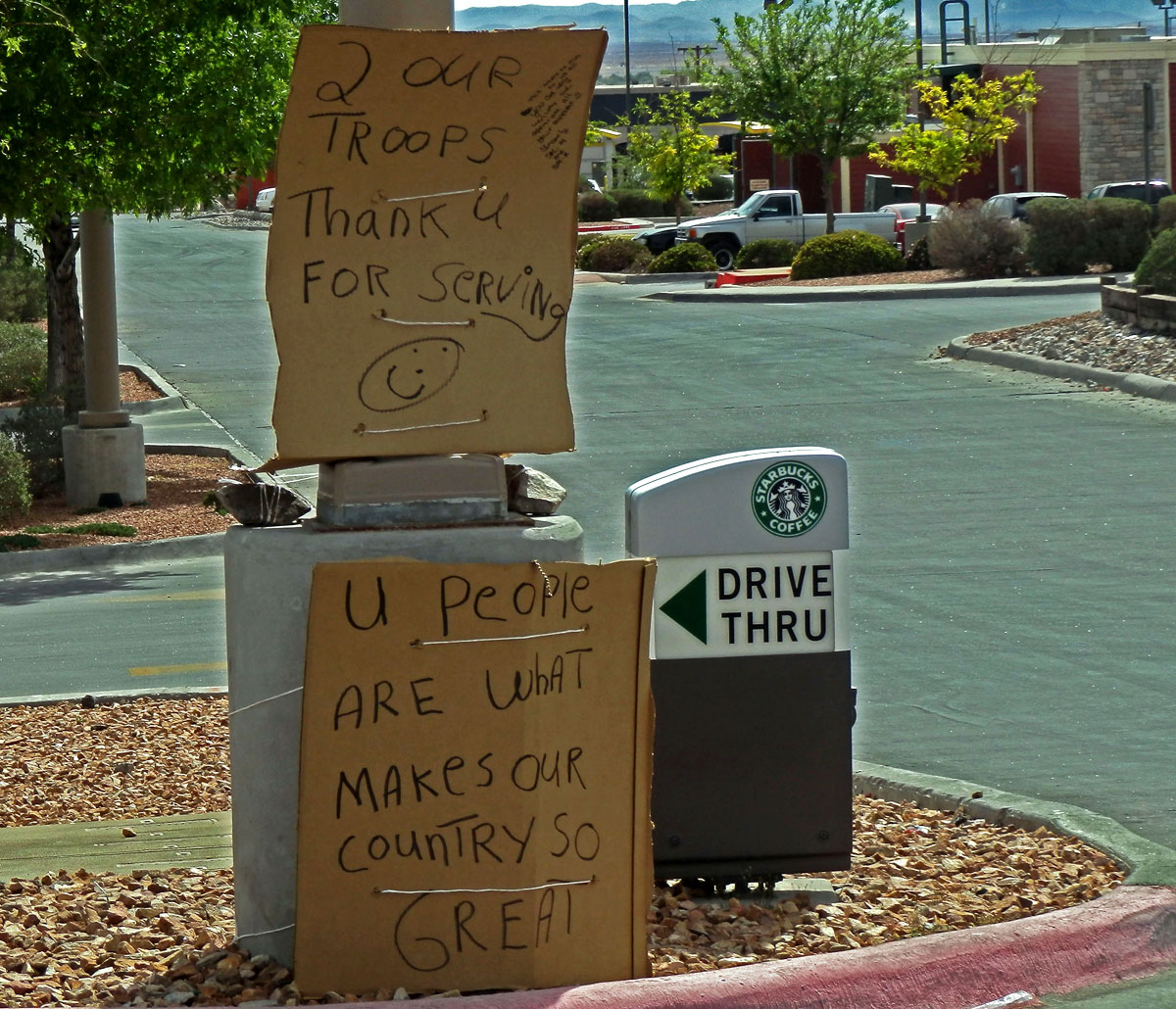 Homeless veterans in El Paso are estimated to be around 200 according to Casa Vida de Salud.

EL PASO – Nicolas Charles Damico, a veteran of both of America’s longest wars, shuffles through papers on the kitchen table of the homeless shelter where he lives until he finds the Army patch he promises to live by – “This we’ll defend.”

He does this at the Veterans Transitional Living Center, a shelter for homeless veterans who have the potential to return to normal life soon. “I am now homeless for many reasons. The one benefit I got, I messed up. I used up my G.I. Bill very quickly. I only had 36 months to complete my education. Coming back from war is not easy,” Damico said. Homeless veterans in El Paso are estimated to be around 200 according to Casa Vida de Salud. (Cristina Quinones/Borderzine.com)

Damico had enlisted in 2001 at age 30 after being laid off from Lockheed Martin, a defense contractor for the military. Soon after coming home from war in 2008 after serving in Iraq and Afghanistan, he experienced many personal difficulties, including anger issues, and Post Traumatic Stress Disorder (PTSD).  “It was hard for me to keep a job, much less go to school. I ended up homeless. I don’t drink, but the guys who do do it to forget,” he said.

The center, which houses some 20 veterans at any time, is currently the only housing available that is funded by the Veterans Administration for homeless veterans. To live at the center, the men have to be completely off drugs and alcohol. A curfew is enforced and they have to be working or pursuing higher education. Nicolas Charles Damico enlisted in 2001 at age 30 after being laid off by a defense contractor for the military. (Cristina Quinones/Borderzine.com)

As of 2011, the U.S. counted 1,429,036 active duty military persons, a rapidly growing number, while the benefits that are promised after discharge are diminishing as the U.S. economy limps along. “It’s too much spending in the wrong places,” said Damico who became homeless during the holiday season, five years after coming home from war in Iraq.

According to any military site, including “goarmy.com,” enlisting in the military promises to provide education assistance, job experience, among many things. First Sergeant Fernando S. Garcia who works as a recruiter for the U.S. Army said, “I try not to lie to people. I assume people know that going into combat is a possibility, but everyone’s experience is going to be different.”

Garcia was able to complete his duties in the military as a cook, and move on to being a recruiter.  He now works in northeast El Paso recruiting new members for the U.S. Army. “It is a possibility that you could end up with PTSD. It’s also a possibility you could end up like me.  Enlisting was the best decision I ever made.”

One of the major cuts that hit military veterans in El Paso affected Casa Vida de Salud, which is a “Recovery Alliance” for alcohol and drug abuse. Alliance manager Mario Mendoza said that veterans could use a lot more services, especially after returning from war. “We used to be funded by the VA, but they completely cut our funding, so now we are paid for partially by state grants, and the rest is self-paid by the individuals.” Many occupants of Casa Vida are veterans, but now they have to pay for peer-to-peer counselling.

Despite the new policies, Been Bass, the Executive Director is happy about Casa Vida’s new building. “When we were funded by the VA, our building was run down, now our new building is much more accommodating for our occupants.” The VA said that they would not fund Casa Vida because it was “not in compliance with the standards of the VA.”  The new building has a backyard, several rooms, and a particularly clean kitchen. “Our kitchen has gotten much better ratings than most of the best restaurants in town. The new building is great, I don’t see why it isn’t in compliance,” Bass said.

Funding Casa Vida could help keep veterans off the street. “At any given time it is estimated there are around 1,000 homeless veterans on the street and 200 are here in El Paso. Addiction, PTSD, and no mental support leads them to be lost, and we are here to help,” Bass said.

Experiencing combat can lead to PTSD, an anxiety disorder people can suffer after trauma. Untreated, this can lead to difficulty living a normal life. In the past year alone the number of diagnosed cases of PTSD in the military jumped 50 percent – and that’s just diagnosed cases that are recorded as being treated at a facility. Nearly 30 percent of the veterans treated by the VA have PTSD. “We see it often, combat can take a toll on you. That can lead to drinking, or other problems,” Bass said. Veteran Victor Garcia displays his tattoo Nacer Vivir Morir. " Your born, you live, and you die" he says. (Cristina Quinones/Borderzine.com)

The stress of returning to civilian life is one of the main issues affecting U.S. military veterans returning from war. Victor Garcia, a junior majoring in Organizational and Corporate Communication at UTEP is one of the many veterans suffering from PTSD. “I have flashbacks. I have anger issues as well, and I’ve had flashbacks at school,” Garcia said.

The G.I. Bill is a benefit allotted to veterans based on their military service. Currently there are several different programs under this bill, including the “Post 9/11 G.I. Bill”, which is currently the bill that affects all returning veterans from the Middle East. Under this bill, a percentage of their education is paid for based on time served. In order to be eligible for tuition benefits veterans have to have either completed at least 90 days of aggregate service or medically discharged. This bill also includes some allowance for books and supplies, and sometimes housing.

According to the House Committee on the Veteran Budget, the national budget for veterans was supposed to increase by 4.3 percent in 2013, in comparison to the budget in 2012. Many veterans will be “backed up” to receive the benefits they need for disability, children, and education, just to name a few. “The claims keep piling up. Everyone is backed up, at the meeting I went to, the guys there were maybe 70, 80 years old from Vietnam, if I am waiting, can you imagine how long the guys coming home this year will be waiting?  Even if there is a slight increase, it isn’t measuring up to how many people will be waiting for their benefits,” Damico said.

Serving in the military is not just an occupation. It is an honor, Damico said, that some carry with them for life. “‘This we’ll defend’ is something I will live by for the rest of my life. I will always live to protect, and to defend,” he said.

One thought on “Unable to adjust to civilian life, some Army veterans end up living on the street”