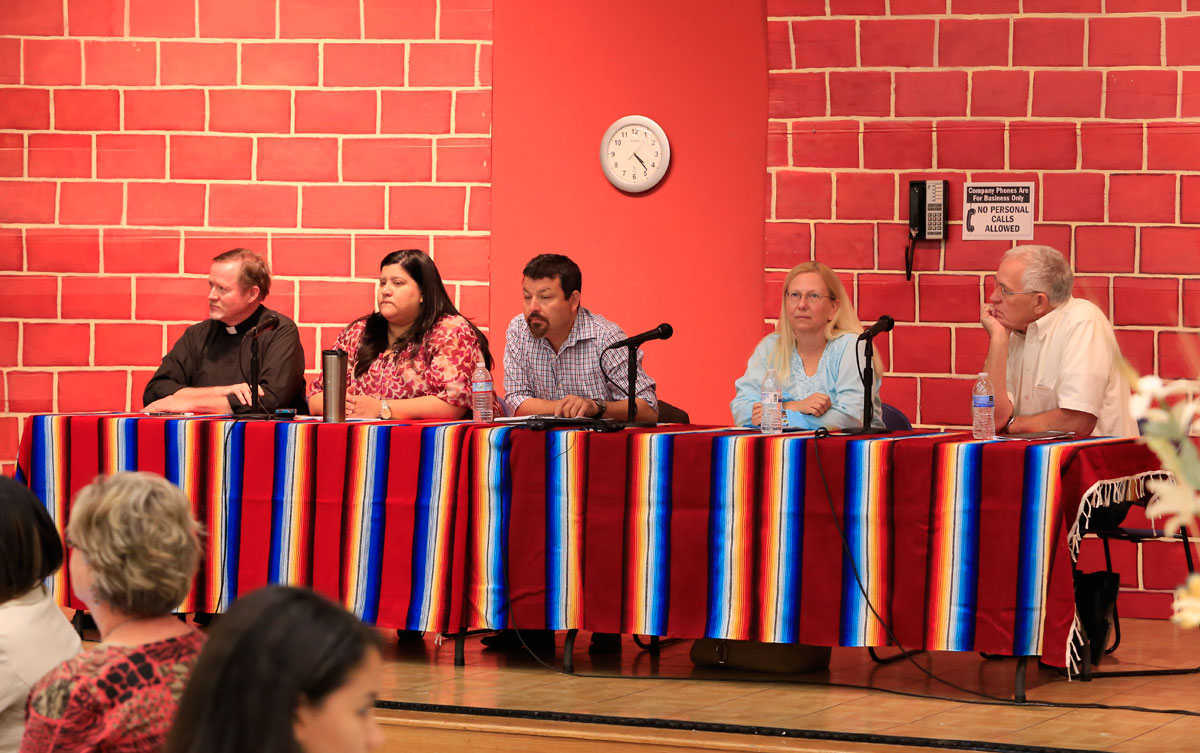 EL PASO – The American media still has a lot of work to do. It has not fulfilled its responsibility covering the stories of the millions of immigrants that live in the United States, and has not fully challenged the narrative that has dominated the immigration debate for the last decade and a half, a panel of border activists and immigration experts agreed this last weekend.

In front of the five panelists, a roomful of journalists listened to their concerns and ideas as part of the first Specialized Reporting Institute on Immigration Reform held in El Paso, TX and sponsored by the McCormick Foundation. The twenty reporters from all over the country and a dozen journalism students sat in silence inside the auditorium of Centro de Salud Familiar La Fe on Sept. 28 as they listened to the concerns of the immigration advocates.

“Why, if the border, and if El Paso, Brownsville, San Diego and other border cities are the safest in the nation, why do they [politicians] keep saying that the border is out of control?” asked Fernando García, director of the Border Network for Human Rights. “Why is the media playing along?”

García recalled the first serious round of immigration reform that took place in Congress in 1997. There was a deal on the table, he said, but a narrative got pushed: “Borders are out of control, there’s a lot of violence, there’s chaos in the border.”  The reform died, he said, but the number of Border Patrol agents increased and plans for a border fence began to take form. The narrative got stuck in the public arena, he added.

More recently, after months of debate in Congress about the possibility of a comprehensive immigration reform, and the creation of a Senate bipartisan committee that presented a bill that passed the Senate this summer. There needs to be intense investigative journalism to change the “false narrative,” García said.

“One of the reasons that narrative becomes dominant is because journalists are not doing their homework. You are not taking your time, doing the research, getting into the issues, finding out what the statistics are before beginning the process of the interview,” added García, who says he is often approached by journalists from the United States and other countries with questions regarding immigration and the violence in neighboring Ciudad Juarez, which has experienced about 10,000 deaths in the past seven years from criminals and drug cartels.

“It’s incredible how important it is for journalists to just get the quote and move on. You can’t imagine how many times I’ve gotten calls and ended up educating reporters on what is most basic,” he said. Estela Reyes López, media relations officer for Centro de Salud Familiar La Fe and the panel moderator, agreed: “It needs to be said. We didn’t invite you guys to the house to ‘darles una regañada’, but sometimes it needs to be said,” said Reyes López, a former journalist.  “We, the news industry, have lost in many ways the public’s trust, and we need to get it back. We need to earn it back.”

Lise Olsen, an investigative journalist for the Houston Chronicle who provided training at the Specialized Reporting Institute, acknowledged the concerns of the immigration advocates and quickly asked for suggestions on how to better cover certain immigration issues, especially for the visiting journalists from all over the country that “do not have the great benefit of being able to come to your centers.”

“The passion for objectivity obscures the truth,” replied Mosher. “Supposedly we have freedom of information here, yet the American people seem to be so badly informed about what’s really going on.”

López, from the El Paso Catholic Diocese Center for Immigrant and Refuge Services, agreed and stated that the lack of understanding of immigration law by journalists can do a disservice to readers or their audience. It can “completely change their opinion on what’s being written, and takes the story out of context,” she advised.

Several of the reporters, as well as Zita Arocha, director of Borderzine.com, had a response. Nonprofit organizations and immigration advocates need to be more proactive, and work with reporters to make sure that the truth comes out, a point that was well received without hesitation by several panelists.  “We need you to help us tell your story,” she said. “You need to take control of your narrative.”

Fernando García clarified that he is not recommending that reporters become “militant journalists, or to become biased” to certain communities or issues.