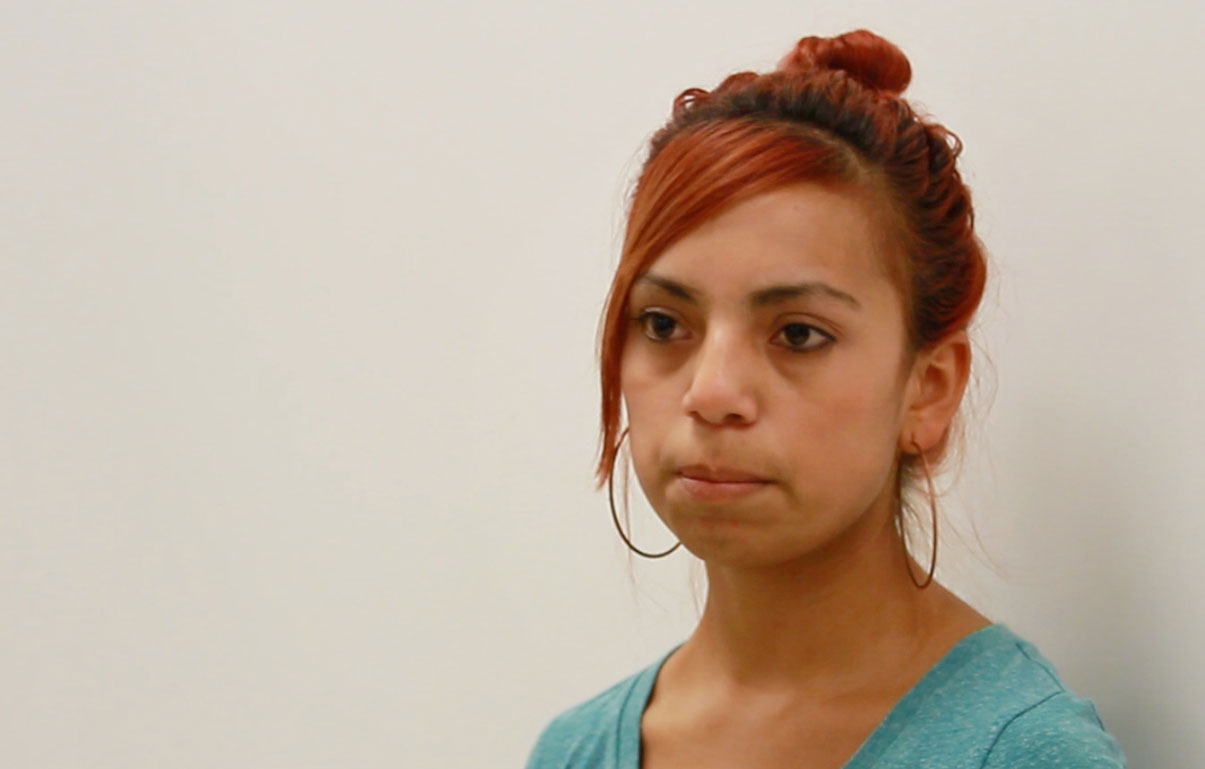 Bianey Reyes was granted asylum in the U.S. this summer after a three-year-wait. (Luis Hernández/Borderzine.com) Bianey Reyes was granted asylum in the U.S. this summer after a three-year wait. (Luis Hernández/Borderzine.com)

“They never did any harm to anyone and still they continued to kill them… For those of us left we continue to struggle and ask for justice.”

EL PASO – Bianey Reyes, 18, nervously pats down the wrinkles in her light-blue t-shirt. She searches for the courage to look up from the floor and her Converse shoes, then raises her head high and sets her brown eyes on a room filled with 20 visiting journalists. In a quiet, restrained voice, she begins to describe the kidnapping of various members of her family, and the murders of her father, uncles, aunts, and cousins by suspected members of the Mexican military in el Valle de Juarez over the last five years.

“In all of these events that happened to my family, the military was always involved and they have yet to arrest anyone responsible for the murders,” said Reyes, who attends El Paso Community College and was granted asylum in the U.S. this summer after a three-year wait.

Reyes testimony at a recent immigration reporting workshop at the University of Texas at El Paso marks the first time she has gone public with her ordeal. She told her story in Spanish to the journalists through an interpreter, Molly Molloy, a librarian at New Mexico State University who daily documents the crime and drug-related violence in neighboring Ciudad Juarez through her e-newsletter Frontera-List, which has nearly 1,000 followers.

The attacks on Reyes’s family began when her cousin Julio Cesar Reyes was murdered in November of 2008. After that, other family members began receiving death threats. In el Valle de Juarez, the Reyes family was referred to as los panaderos, the bakers, and had operated a small bakery in the community since the time of her grandfather. They had a history of social activism and frequently helped solve problems for members of the community.

“Vaya con los panaderos, los van a ayudar. Go with the bakers, they will help you,” Reyes recalled how neighbors often referred to her family.

“My aunt Josefina Reyes Salazar was then killed in January of 2010; my family continued to demonstrate and protest to the authorities so that my family’s murders should be cleared up, but the government never gave us any answers,” she said.

Next to die was her father, Rubén Reyes, who was murdered in Ciudad Juarez on August 18 of that year. “That same day the Mexican military invaded my home, stole personal belongings, and took food,” she said. It was at this time that the military then threatened Bianey and her family telling them that they needed to leave and stop their protesting. A few days after her father’s funeral, Bianey with some members of her family fled to neighboring El Paso in the United States.

“We began to receive threats from the Mexican Army, and then the assassinations began in my (remaining) family,” she said. According to Reyes, two aunts and two uncles still living in Ciudad Juarez were kidnapped in February of 2011.

After their disappearances, her family mounted a community-wide protest in front of the Attorney General’s Office in Ciudad Juarez demanding that her relatives be returned. Her grandmother also traveled to Mexico City with the same demands of the Mexican government. Several days later, the Mexican government contacted Reyes and her family stating that the dead bodies of her aunts and uncles had been found.

“My father and his brothers and sisters were always helping people, Reyes said. “They never did any harm to anyone and still they continued to kill them and make it necessary for us to leave.  For those of us left here we continue to struggle and ask for justice.”

Molloy said that the Reyes family’s well-documented and reported history of social activism in Mexico helped convince U.S. immigration officials to grant the teenager asylum. However, obtaining asylum is often difficult for most asylum seekers because they lack documentation or proof of violence or threats against them in their home country, Molloy added.

The continuing drug-related violence in Mexico has led to a spike in asylum application numbers from Mexican nationals. There have been 14,610 asylum claims along the border with Mexico during the first three-quarters of the 2013 fiscal year, according to the Department of Homeland Security. In 2011, there were 6,824, an increase of 53 percent. Texas is the number one state for refugee arrivals in the nation.

In El Paso Immigration judges have denied 87.2 percent of all political asylum cases that they have ruled on between 2006 and 2012, according to a recent report published by the Transactional Records Access Clearinghouse, a data research organization from Syracuse University.

According to Department of Homeland Security, Mexico is not in the top 10 list of nations receiving political asylum. U.S. immigration authorities granted fewer than 200 applications from Mexico last year. As a reference, only in Ciudad Juarez an average of six persons per day were killed between 2008-12.

El Paso Immigration Attorney Eduardo Beckett, another speaker at the conference session, said, “In the case of Mexican asylum, it appears that both the immigration judges along with the Office of Chief Counsel, minimize the impunity and corruption that exists throughout Mexico. It appears that they have become desensitized to the realities of the violence in Mexico.”

El Paso Immigration Court Judge Thomas C. Roepke had the fourth-highest denial rate nationwide, rejecting 96.3 percent of refugees seeking asylum in the United States. Nearly 85 percent of the applications he reviewed were from Mexico, Honduras, El Salvador and Guatemala, according to TRAC’s report.

Meanwhile, Judge William L. Abbott, also in El Paso, had an 80.1 percent denial rate between the years 2007 and 2012, a majority of which came from Mexicans and Salvadorans. Both judges have rates of asylum denial that are well above the national denial average of 50.6 percent.

Beckett believes one reason for the high rates of denials in El Paso maybe that local judges are worried about the flood of Mexicans who would apply for asylum if more cases were granted. “The judges assume that the Mexican asylum seekers can simply go back to Mexico and relocate within Mexico,” Beckett said.

Despite numerous attempts to reach Judge Roepke, his office has yet to respond to a request for an interview.

At the conclusion of her presentation, Reyes said she finally decided to tell her story because, “it seems that here in the United States people still don’t really know what is going on in Mexico. People always say ‘oh everything is getting better in Mexico,’ but in reality deaths continue to mount and the government has done nothing. There is no security; there is always a fear of getting robbed, kidnapped, or even killed,” she said.