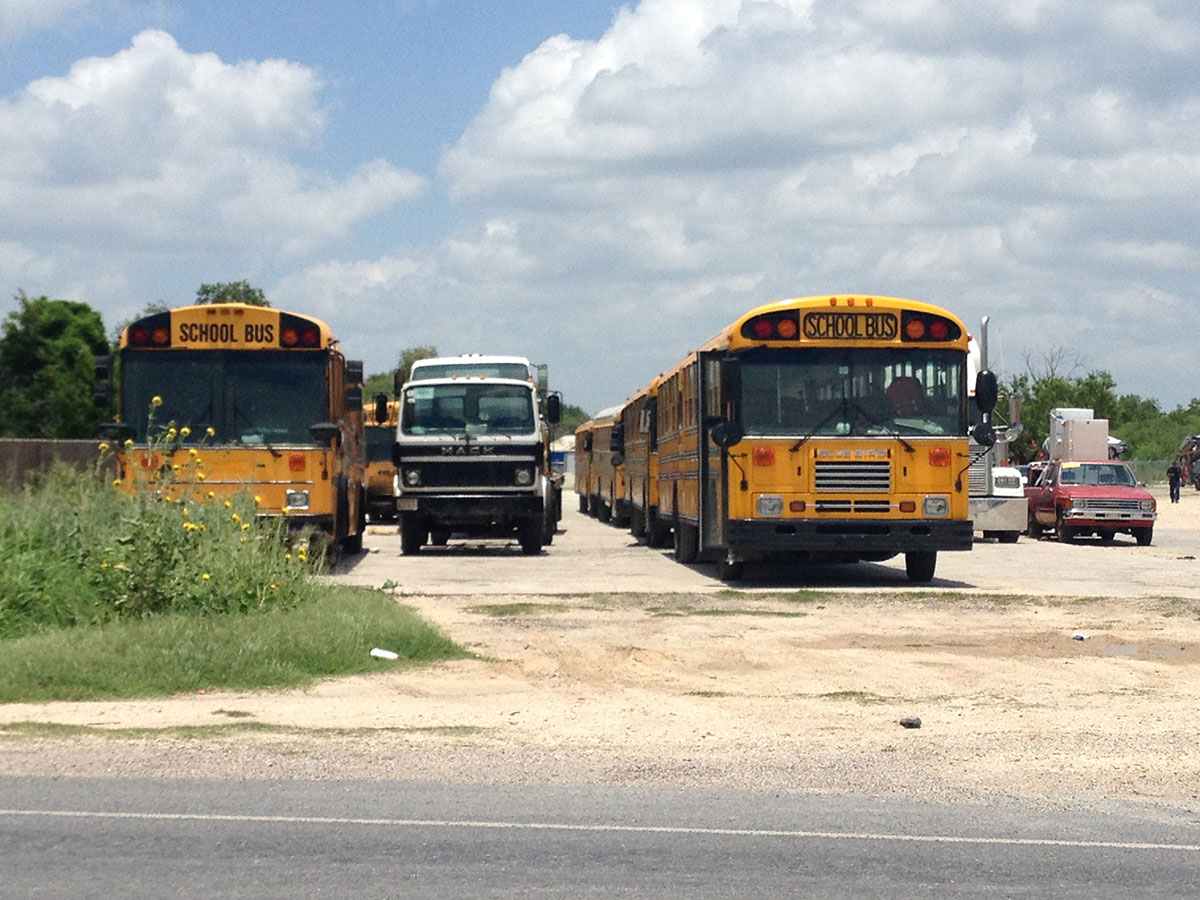 Los Indios, Texas. Transmigrantes companies are big business in Los Indios where Central American immigrants fill up buses and other vehicles with used clothes and toys and take them back to their home countries. (Sergio Chapa/Borderzine.com)

BROWNSVILLE-MATAMOROS – Our nine-day journey started in the southernmost tip of Texas just east of where the Rio Grande River empties into the Gulf of Mexico.

Cameron County is home to more than 406,000 people and is one of four counties that make up the Rio Grande Valley.

It’s a beautiful part of the border, one filled with great natural beauty. Los Indios, Texas. Transmigrantes companies are big business in Los Indios where Central American immigrants fill up buses and other vehicles with used clothes and toys and take them back to their home countries. (Sergio Chapa/Borderzine.com)

But there are also bleak industrial landscapes mixed in with rich farmland and neighborhoods both rich and poor.

Mexico’s bloody drug war and kidnappings have definitely taken its toll on American tourism south of the border in Mexico’s State of Tamaulipas.

But family, cultural and economic ties between the U.S. cities of Cameron County and those of Tamaulipas remain strong.

Lupita and I still cross the Brownsville-Matamoros border with ease to eat dinner, watch a movie or enjoy the cultural events that still continue. With a population of over 1.3 million, Matamoros-Brownsville is the 4th largest metropolitan area on the US-Mexico border.

Our journey began in Brownsville at the Veterans International Bridge. It’s the southernmost and easternmost international border crossing in the United States.

The bridge is located just blocks away from the University of Texas at Brownsville campus where Lupita works as a professor.

Just down the street is the Gateway International Bridge, which connects downtown Brownsville with Matamoros, a sprawling border city of 500,000 people.

On any given day, the streets of downtown Brownsville are filled with Mexican shoppers going in and out of the wholesale and retail stores.

Those colorful stores are owned by Korean families and offer both bargains and surprises to shoppers.

Just west of downtown is the Brownsville & Matamoros International Bridge, the oldest bridge in Cameron County. Built in 1909, the B & M bridge includes lanes for cars, pedestrians and a cargo rail line for train traffic.

The rail line, which is the only crossing for 210 miles on either side of the border, will be closed in 2014.

Officials are moving the rail line outside city limits to the West Brownsville Rail Corridor to alleviate traffic and congestion inside the city.

Most of the land along the new line is either wildlife refuge or farmland decreasing the chance of train traffic interfering with people.

There is very little love in Brownsville for the federal government’s border wall, which is found both inside and outside the city.

At a public hearing in Brownsville, former U.S. Congressman Tom Tancredo (R-Colorado) once seemed stunned by the love of Brownsville residents for Mexico, their “borders-don’t-matter” attitude and resistance to the wall.

“If you don’t want a fence between this city and Mexico, I suggest that you build this fence around the northern part of your city,” Tancredo said, implying that Brownsville should be left on the Mexican side of the wall.

Construction for the fence started in 2008. Nowhere along the US-Mexico boundary is the border wall more imposing than in the Colonia Galaxia neighborhood in northwest Brownsville.

The working class neighborhood is nestled along the Rio Grande River and Military Highway, and straddles the border for more than 60 miles.

In the Colonia Galaxia neighborhood, the 18-foot high steel border fence rises above humble homes with chain-link fences, trampolines and cars parked in the back yard.

Just down Military Highway, there is no border wall in the immaculate and upscale River Bend Resort and Golf Course.

A drive down Military Highway from Brownsville reveals many contrasts.

The border wall can be seen just to the south of the highway alongside a checkerboard of rural homes, historic cemeteries and rural stores.

The next biggest city is Los Indios, home to the Los Indios Free Trade Bridge.

Built in 1992, the bridge was constructed for use by 18-wheeler traffic for the maquiladoras, assembly plants, in Western Matamoros. Maquiladoras produce a number of goods electronics, auto parts and there are recycling plants for cardboard and aluminum cans.

There are a handful of maquiladoras on the American side of the bridge but little development on the Mexican side. The Matamoros plants are actually about 20 miles east of the bridge. It’s a lonely rural (and now dangerous drive) to the bridge. Immediately south of the bridge are these sad shops and the rural town of Lucio Blanco, where the cultists sacrificed kidnapped Spring Breaker Mark Kilroy and others in the late 1980s. The City of Valle Hermoso is 30 minutes south. It’s a sad, boring town that before the drug war, was only known for sorghum and a natural gas power plant built by the French. It was one of the bloodiest cities in Mexico’s drug war with the Zetas and Gulf Cartel battling for control. People call it “La Ciudad de la Tres Mentiras… Ni ciudad, ni valle, ni hermoso…”

In the not too distant past, visitors to Matamoros could drive to the Los Indios bridge to avoid the long lines at the other bridges but the highway linking the bridge and Matamoros became known for drug cartel gun battles and checkpoints manned by armed men.

The biggest industry in Los Indios appears to be the transmigrantes, Central American immigrants who live in the United States but travel back to their home countries. They travel all year round but the main “season” is during the holidays.

The transmigrantes own several businesses in Los Indios where they fill up old school buses and cars with used clothes, toys and bicycles and then drive in convoys south to Guatemala, Honduras, El Salvador and Nicaragua.

To the west of Los Indios are rich farmlands for sorghum, cotton, sugarcane and onions that are only interrupted by the rural towns of Bluetown and Santa Maria.

The town of Santa Maria, which was founded in 1777, includes a historic chapel, which was built in 1824 but has since fallen into disrepair.

The Future of Cameron County

Although Mexico’s drug war has provided a temporary setback to growth and development, the region remains poised for tremendous economic growth.

The American Consulate in Matamoros bought an old hotel near the Mexican side of the B & M Bridge and is building a new, state-of-the-art facility to meet the increased demand for tourist visas to the United States.

And it’s easy to see why.

That discovery is expected to bring jobs and development to this part of the border.

Known as the Carretera Interoceanica or Interocean Highway, the route links the port city of Mazatlan to Durango then Torreon and to Satillo, Monterrey, Reynosa and ultimately Matamoros.

Fortunes also seem good for the American side of the border, Brownsville, where officials want to build the Space X port for rockets to launch satellites into outer space.

Environmentalists oppose the project because it is being built near Boca Chica Beach and wildlife refuge land, which is home to the ocelot and other endangered species.

Regardless of the outcome, business is booming in the Port of Brownsville, which is home to shrimpers, metal recycling and oilrig construction companies.

Development also continues on nearby South Padre Island where wealthy families from Monterrey, Mexico own many of the Island’s high-rise condos.