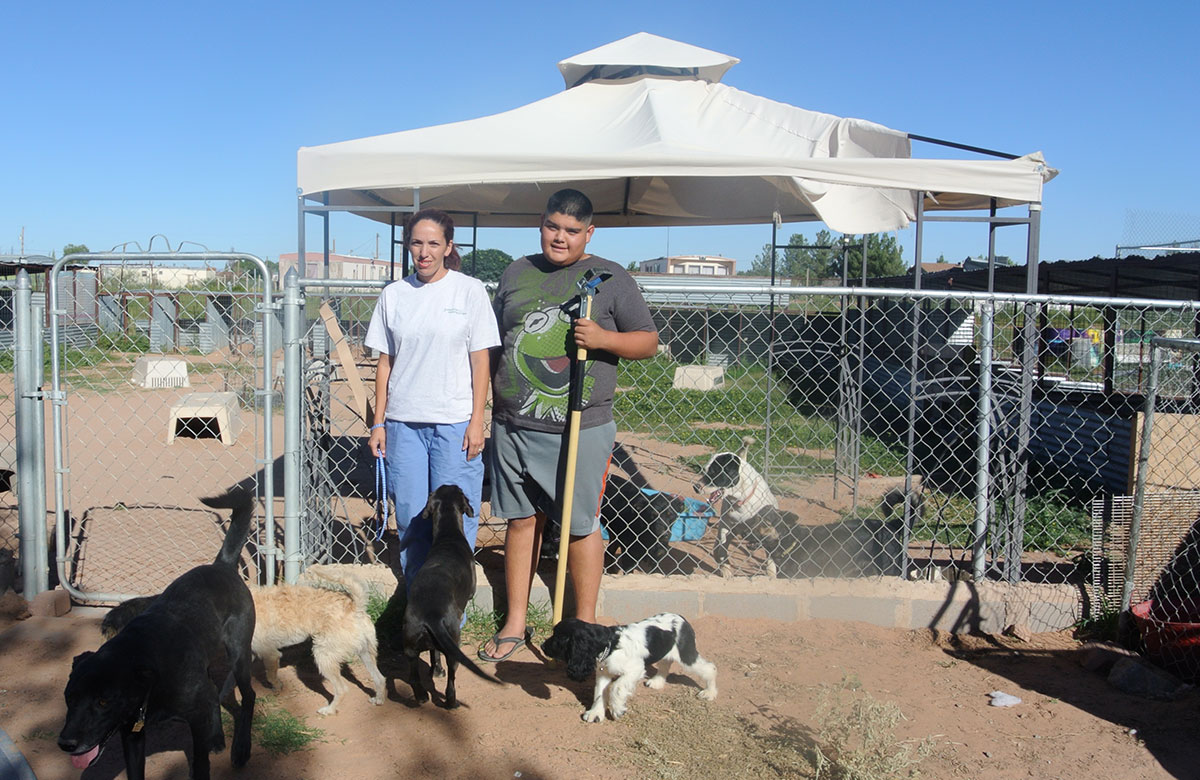 CHAPARRAL, NM – An animal lover since she was a child, El Pasoan Iliana Guzman now devotes her free time to the care of homeless animals.

The 34-year-old paralegal last year opened her very own animal shelter, a long time dream, and now cares for nearly 100 dogs and cats on her one-and-a-half acre parcel of land in Chaparral, New Mexico. Recently, she rescued several dozen animals that had been removed from their owner because of hoarding. Prior to opening Enchanted Pass Animal Rescue, Guzman would always take abandoned animals into her home and then rehabilitate them until she could find suitable owners.

Although the last year has been a busy time for Guzman and her four children, who also help with the care of the animals, “it’s worth it in the end,” she says.

Every Saturday, she packs her ‘06 Lincoln Mark truck with half a dozen dogs and cats and sets up inside of the PetSmart in Las Cruces in hopes that animal lovers stop by and fall in love with one of the critters. “First we see all the animals going home, then we get to see (the pets) come in to PetSmart shopping with their owners, so that’s very worth it,” she said.

Enchanted Pass currently only counts on the help of two volunteers, who help out occasionally, but the pet caretakers are primarily Guzman’s children, Jonathan Bustillos, 18, Carlos Pedroza, 14, Sergio Pedroza, 15 and Renee Guzman, 8.

After school every day, Sergio cleans the kennels and the yard, feeds the dogs and cats. He also helps volunteer dog trainer Zahn Camacho teach the aggressive dogs to socialize with people and other dogs. Sergio says he wants to become a veterinarian and one day wants to be in charge of Enchanted Pass and continue to make the family’s dream a reality.

“It’s my dream to be a vet so my mom can get the dogs fixed without paying,” he said. “My goal is to build a spay and neuter clinic in the shelter to help control overpopulation to prevent more homeless animals. And I love dogs.”

One of Guzman’s goals is to educate the public about the importance of spaying and neutering their pets to help reduce overpopulation. Adoption fees are $75 including spaying, neutering, microchiping, and providing vaccinations. Recently, Guzman was able to rescue 47 sick and malnourish dogs from an animal cruelty case in Chaparral. (Velia Quiroz/Borderzine.com)

Guzman said she was notified by acquaintances last month about the discovery of 208 animals in Chaparral. The animals were sick and malnourished. Some had been stuffed into bags and left inside trashcans. Eventually 50 were euthanized due to aggression. But Guzman was able to rescue 47 dogs and six cats. Half of them are now housed at Enchanted Pass in kennels donated by a local veterinarian. Other organizations and individuals have adopted the remaining abused animals.

Camacho, a trainer at Enchanted Pass, is currently helping to train the dogs. “The dogs were very scared. They wouldn’t come to any human, but now they come to you, they wag their tales they are not afraid of people anymore,” Guzman said.

Guzman also sometimes takes in dogs that are about to be put down by El Paso Animal Services. She works to help find them new homes and a second chance. She receives calls from volunteers at the El Paso Humane Society when a dog is going to be euthanized asking if her shelter can accept the animal. Other times Guzman goes on the animal services website to check what dogs are due to be euthanized.

“I pick the hard to adopt dogs from there because they won’t have a chance,” she said.

Enchanted Pass is a nonprofit organization that does not receive any government assistance or grants. Currently the only financial help that Enchanted Pass receives is from public donations.  But most of the money to run the shelter comes from Guzman’s paycheck that works as a paralegal for a downtown El Paso law office. Enchanted Pass is home not only to dogs. (Velia Quiroz/Borderzine.com)

At Enchanted Pass the smaller well-behaved dogs are allowed to run freely on the property, and when she is present all the dogs get a chance to play together.

“It gets pretty crazy because everybody is just running around the property,” she says. One dog, a black lab named Oscar, “took it upon himself to be the guard dog.” Oscar has been at the shelter for a year and before he was trained was a bit aggressive with other dogs. “We never gave up on him,” she said.

Currently, the dogs are housed in kennels on the land; the cats reside in a mobile home. Guzman plans to build an indoor shelter with kennels and air conditioning to allow the dogs to be confortable in the summer and in the winter. She also wants to add a dog park.

Guzman is also in search of foster pet parents who care for the animals until they are permanently adopted. Dog food and medical need is provided during the foster period.

Enchanted Pass is always in need of volunteers and donations anyone interested can go to the website EnchantedPass.org to request a volunteer application. The public can also call the shelter at (915) 479-2622.

Donations are always welcome; there is a PayPal account that can be used and donations are tax deductible. Items like blankets, dog beds, and cleaning supplies are always needed for the dogs. Dog food is in big demand considering they go through 200 pounds of dog food a week. And now with the addition of the dogs from the hoarding case they are going through 250 pounds a week.