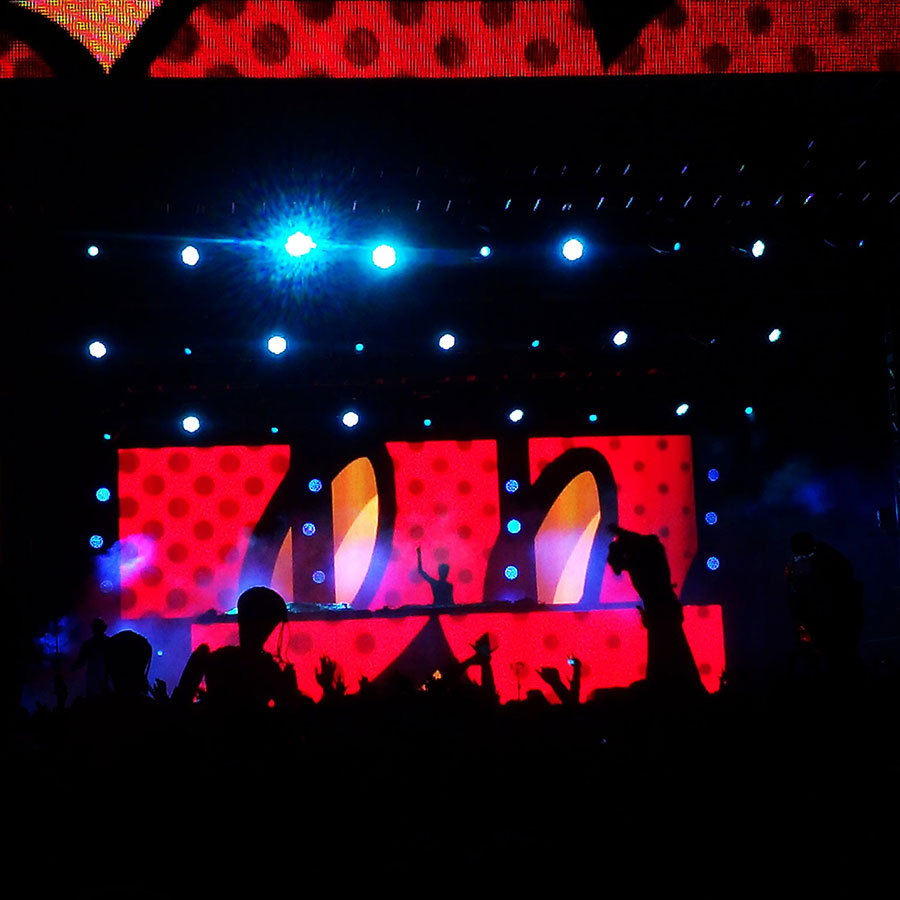 Danny Avila during his set at SCMF in Ascarate Park during Labor Day weekend. (Valeria Hernández/Borderzine.com)

EL PASO ­– The beat was big and loud, echoing in my chest, and the flashing lights were like an array of Technicolor feeding the crowd’s hungry eyes.

I looked around and I could almost see the pure joy exuding from everyone’s faces. Their ear-to-ear smiles said it all. In that huge sea of people dancing to Tiesto’s “Adagio for Strings,” under the Sun City’s starry sky, I was one with the crowd and it was perfect. Danny Avila during his set at SCMF in Ascarate Park during Labor Day weekend. (Valeria Hernández/Borderzine.com)

Electronic dance music has been around since the mid-1990’s, roughly, but it has been growing in popularity and is perhaps at its peak right now. Yearly, thousands of people gather in cities like Las Vegas, Miami, New York and El Paso, for music festivals that can last anywhere from one to three days or even more.

I’ve been attending raves and music festivals since 2009 but I still remember my very first festival experience. It was during Wolfgang Gartner’s hour-and-a-half set at the first Sun City Music Festival in El Paso back in 2011, that I fell in love with the scene. My music taste has greatly developed and improved, or so I think, since then and the love for the music continues to grow constantly.

I don’t look the other way, for I’m aware that there are certain trends that are often directly attached to the EDM scene. Now more than ever, instances of somebody known as “Molly” taking people’s lives are emerging in the public eye. Molly is the nickname given to the illegal drug MDMA or Ecstasy.

During Sun City Music Festival, I witnessed paramedics carrying a girl out of the crowd, her eyes rolling to the back of her head, her muscles in spasms.

The darker side of the moon in the rave scene tends to be recognized as the drug usage that has led to multiple overdoses and other injuries. Just at the end of August, widely known German DJ, Zedd, who produced the hit “Clarity,” cancelled his second date at the House of Blues in Boston after drug overdoses were reported at his first concert.

“Give me a night. Just you, me, the lights and the music. Let me take you there. Let me do the heavy lifting, that’s my job,” said Kaskade on Twitter, fresh off his summer residency at The Marquee club in Las Vegas, Nevada, “I believe 100 percent it can be life-changing and uplifting when you are 100 percent sober. Otherwise, I wouldn’t be here.”

Molly struck again at Electric Zoo in Randall’s Island, New York, which was scheduled to happen Labor Day weekend, but the third day was cancelled after two deaths were reported during the second day of the festival. The deaths of Olivia Rotondo, 20, and Jeffrey Russ, 23, were caused by an overdose of MDMA and hyperthermia.

This issue hit close to home when a 17-year-old girl from Houston was in critical condition at a local hospital after overdosing on “Molly” at this year’s Sun City Music Festival at the beginning of September. I’ll never know whether the girl I saw being carried out is the same as this 17 year-old. Local promoters did not respond to my emails asking for more information. Markus Schulz raises his hands to his fans during the first day of SCMF at Ascarate Park. (Valeria Hernández/Borderzine.com)

Multiple well-known DJs in the scene have spoken out on tragic events that have led to show cancellations, hospitalizations and even deaths. “I’ve never loved what I do as much as now and I’ve been sober for 11 months. I love every second of it,” Steve Angello, former member of Swedish House Mafia, stated from his personal Twitter account.

The use of Molly or pills during raves should perhaps be detached from the music itself because this is not the only cause of injury or death during raves or festivals, considering that alcohol is sold at most, if not all, of these events. Not to mention the usage of multiple other drugs, such as cocaine, heroin and marijuana.

The University of Massachusetts sent out a press release towards the end of September stating that the college was going to indefinitely ban “EDM concerts” at the Mullins Center and that the “Molly-taking culture at these shows is real and now exceedingly dangerous to the health and safety of concert attendees.”

The university’s next move after the ban has been to, ironically, welcome Trinidad James, rapper and “molly-enthusiast” set to perform on October 26, to the same venue where Above & Beyond and Pretty Lights were scheduled to perform this month before banning “EDM concerts.”

For some of us, the unexplainable effect this music genre has on our souls, renders us in no need for drugs, but due to the rising number of incidents, festivals and smaller events are now in danger.

I could be having the worst of days, maybe a flat tire earlier that day that made me unbearably late to class or maybe a 70 on a History of Modern East Asia midterm, I know for a fact that once I get to my music, all of those things will disappear and I will feel better. The music always takes me to a happy place where I can be exactly whom I am and nobody can judge me or belittle me.