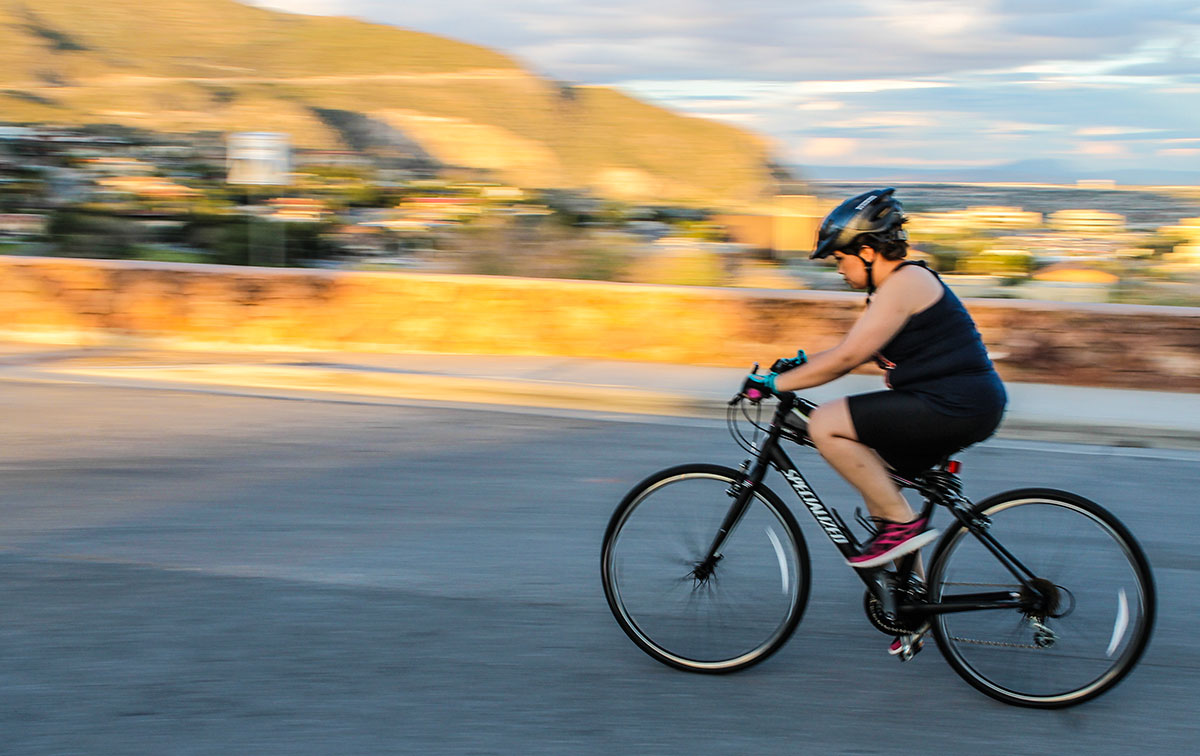 EL PASO — Multitasking is a part of our daily commute no matter what mode of transportation you choose. We watch out that we don’t hit anyone or that others don’t run us off the road. We look to the left, look right, stop, go, brake suddenly and try to keep up our pace. This is what most cyclists experience daily, on a good day.

I became a cyclist about two months ago just for fitness, so I can go ahead and avoid the daunting gym visits. Soon after my husband and mother in law bought a bicycle, it quickly became an outlet for my family and I to spend time together while getting fit. Every other day, when the weather was good we would go out and ride at least 10 miles during the evening. After needing to find accessories and other items for my new hobby, I started to meet the nicest helpful people. I quickly found out that whether it is a local bike shop or other cyclists on the road, everyone is quite friendly. They always warmly greet you with a hello or a smile.

Two weeks ago, I took part in my first cycling event, The Chile Pepper Challenge in La Vina Winery and I was immediately exposed to how supportive cyclists are towards one another.

If they see you struggling when you are riding up a hill, they remind you to “use a lower gear” that makes it easier and when it appears like you want to give up, they try to cheer you up. Everyone seems to do this all for the good of the sport, even if it is a competitive sport at times. That day is the first time that I felt proud that I became part of the cycling community.

Lately, I have found myself having to ride my bike to school and to work, since my vehicle broke down. I discovered how much harder it is to ride my bicycle as a mode of transportation. Apart from the killer sun, traveling through busy streets is not easy. Turns out there are great difference between planned cycling recreational routes and cycling as transportation.

I ride off the sidewalks because those are designated areas for pedestrians. I ride as the edge of the street since not all streets are design for cyclists to use the full lane. Then there is the fear of those drivers who are always in a rush and the chance that they might not see you. Many are unwilling to move to another lane and give cyclists any space. Some will tease you by tailgating, as you try to ride your bike as fast as you can.

This fear was reinforced by one of my experiences about three weeks ago. As I was riding around noon, down Paisano Drive in downtown El Paso. I surprisingly found myself in an altercation that shows how disrespectful people can be, especially towards cyclists.

This man in his mini van honked at me as the light turned green and sped ahead. I was obviously outraged, especially since I had to move into a pedestrian walkway in the street that was intersecting in order to not be hit so he could speed ahead. Afterwards he cussed me out in front of his family at the next stoplight. I went ahead and shared my knowledge and told him to share the road. I let him know that I was whatever he wanted to call me, only for the fact that I know better and I am not ignorant to the laws of the road. Knowing that I was in the right seemed to anger him more. Luckily the light turned green once again and he drove down Paisano Drive and I took off towards Delta Drive.

Apparently the motto “Share the road” is not part of everyone’s radar when it comes to obey the transit laws. Sadly respect of others doesn’t apply either, when drivers don’t want cyclists on the road.

I must clarify that El Paso has a great cycling community but it is not a bike friendly city.

I am guessing it is the lack of driver education, along with many cyclists’ miseducations that seem to fuel those types of actions. As an El Paso driver, I am used to having to move to the next lane because there is a person riding their bike up ahead. I usually do it to avoid accidentally running that person over. I truly didn’t know these laws until I became a cyclist and had to become aware of them, so to a certain level I understand drivers.

The one detail that people tend to forget is the safety of others, and why driving is such a great responsibility. This is also why there are many accidents that involve pedestrians, cyclists, and motorcycles. People seem to forget that they are driving vehicles that can weigh up to half ton. Drivers don’t realize the fear and anger that they cause when they drive like others shouldn’t be on the road.

The increased interest in cycling has resulted in many new riders. I believe that this spike in popularity should force an effort to educate everyone, including drivers. There also should be an enormous effort by the city of El Paso and the Texas Department of Transportation to create more bike lanes. There are also additional streetlights that are needed to illuminate the roadways properly for safer riding.

At the moment there is also the controversial issues of the proposed Bike Share program in El Paso. Which is a 200-bike system that people can rent whenever they choose to. These bicycles would be stationed and can be returned at several stations around El Paso. This program is looking to contribute to the reduction of vehicle congestion and hopes to improve air quality one rental at a time. Hopefully, if the city of El Paso finds a way around TxDot’s denial of this program, improvements to the streets will eventually have to be made.

I know that at least for now I will continue to deal with this transportation dilemma. Meanwhile when I am cycling, I must always be in high alert of those drivers who aren’t pleased with my presence on the road. I shall also try to be patient because I know better now and I know some are just unaware of the laws. Like many other cyclists out there we ride everyday with caution, hope for the best and ride on.

One thought on “Cyclists find the streets of El Paso unfriendly”