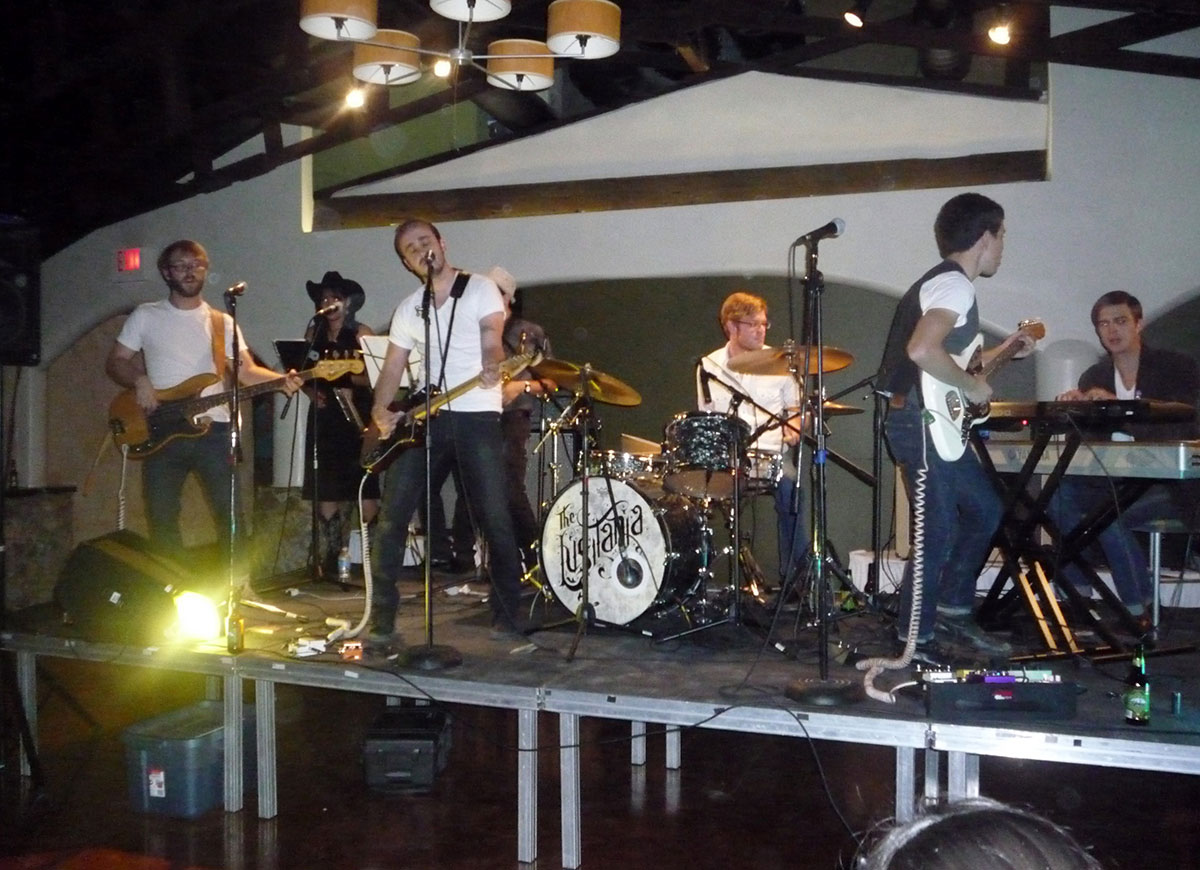 EL PASO – A plain white-walled room in an everyday suburban house filled with amplifiers and microphone wires is the meeting ground and practice space for the El Paso-based band The Lusitania.

The band begins to tune the instruments to start the first practice of the week. Even though they’re nestled in a traditional neighborhood, the vibrations shake the walls of guitarist Will Daugherty’s home. “My neighbors are really cool with what we do,” Daugherty said. “We haven’t gotten complaints about the noise.” The band originally started with brothers Michael and Blake Duncan but has since added members Daugherty, Charles Berry, and Adi Kanlic. Each member balances a dedication to the band with a full time day-job. They have had some difficulties finding jobs that allow them to support themselves while playing their music.

“I miss playing so much,” keyboardist Adi Kanlic said. “Everybody’s doing what they have to do.”

Kanlic is currently attending Kent College of Law in Chicago Illinois to pursue a degree in patent law. Although he can’t play every show, he still tours with the band every break he gets from school. Despite his many hours of studying, Kanlic uses his spare time to practice.

“I try to practice often – it’s therapeutic,” Kanlic said. “After I’ve been studying all day and writing papers and I’m done with everything, I’ll practice my keyboard or pick up my guitar.”

While Kanlic is in law school, guitarist and lead vocalist Michael Duncan is an English professor at The University of Texas at El Paso. “The band doesn’t make enough to support a single person, let alone all five of us so we have to have jobs,” he said.

Michael Duncan teaches during the fall and spring semesters, which gives him the flexibility to tour during breaks. He teaches Writing About Literature and English composition classes for freshmen and sophomores.

Former high school teacher and guitarist, Will Daugherty, now works out of his home office as a content developer for Princeton Review as well as a copywriter for an advertisement agency.

“I work 90 percent of the time from my house; it kind of sucks because I never leave my home since we practice here and I work from home,” Daugherty said. “I am able to do some work on the road if I need to.”

The other two members of the band bartend at local establishments in El Paso.

Bassist Blake Duncan currently bartends at Eloise café and bar in west El Paso. “The big thing about my job is the flexibility,” Blake said. “I can go out of town and come back in town and still have a job.”

Drummer Charles Berry who bartends at Tricky Falls/Bowie Feathers in downtown El Paso agreed that working at the bar helps him to manage touring and work.

When all band mates are free from work, they always make time to practice a couple times a week.

“We always want to practice, but our schedules work day to day,” Daugherty said.

While two of the members work at night and the other two work in the morning the band discusses how midday practices work best with their schedules.

“We have a window of time that we use to practice so we go according to that,” Berry said.

Finding a perfect time to practice during the week doesn’t leave them with a lot of time to continuously create new music. Even though they have little time, they constantly find inspiration for their music.

“I usually have to have inspiration in other areas of my life and then I can take that small amount of time and do something good with it, but it is hard,” Michael Duncan said.

Even though it is hard to tour throughout the year, the band all agrees that they find inspiration on the road playing with other bands. The strong thread that keeps them together is the fact that they are dedicated to their band.

From opening a sold out show in Los Angeles to playing South By Southwest in Austin, the band pushes their boundaries to keep reaching for success. Although they are devoted to their jobs, music will be major part of their lives.

“Hopefully soon I can come back to the band and be able to tour with them because it’s a big part of my heart,” Kanlic said.