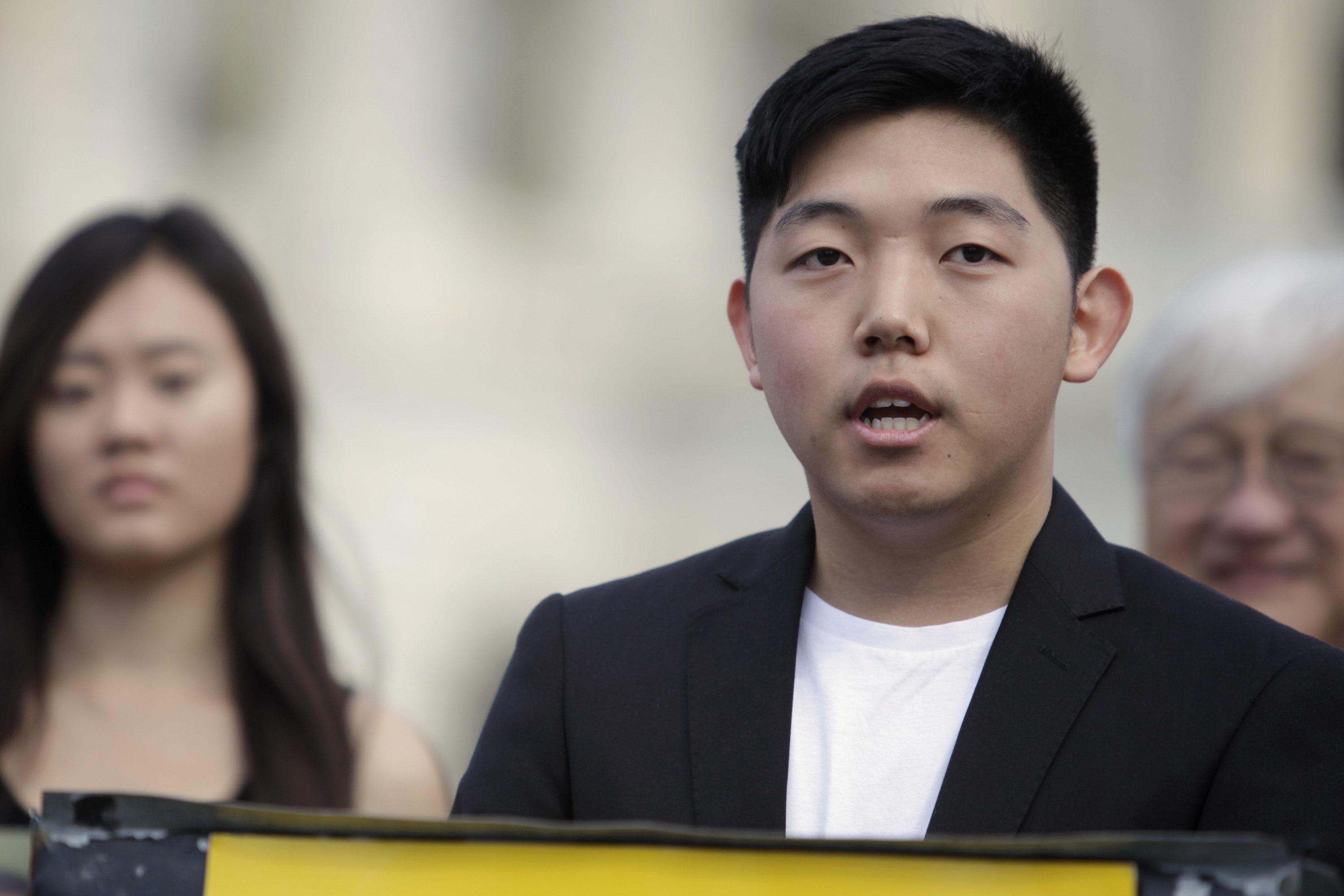 Simon Jun, an undocumented student and DREAM rider, speaks publicly for the first time about his situation. He says that Congress needs to pass immigration reform for the families living in the shadows. (Rob Denton/SHFWire) Simon Jun, an undocumented student and DREAM rider, speaks publicly for the first time about his situation. He says that Congress needs to pass immigration reform for the families living in the shadows. (Rob Denton/SHFWire)

WASHINGTON – Steps away from the Capitol, DREAM rider Simon Jun spoke publically for the first time Wednesday about being an undocumented student in the U.S.

“Growing up, I understood what it meant to be undocumented,” he said. “Don’t break any laws, no matter how trivial they may seem. Never tell or hint to another individual that you are undocumented.”

Standing next to fellow DREAM riders, Asian-American advocacy groups and members of Congress, Jun called on lawmakers to pass comprehensive immigration reform. He said he is thankful to have received approval to stay in the U.S. under the Deferred Action for Childhood Arrivals, which grants temporary residency to young adults brought to the country as children.

But he said the larger issue needs a permanent fix.

“I was recently approved for DACA, but I know that it is a temporary solution to my situation and the plight of millions more, including my family,” said Jun, 18, who is from Los Angeles and will be a freshman business major at the University of California-Irvine in the fall.

His family immigrated from South Korea in 2001.

To raise awareness and build relationships with youth organizations and policy makers across the country, the riders are going on a two-week road trip to nine cities from Washington to Los Angeles.

“I am joining on this road trip, because we are at a pivotal moment of immigration reform,” Jun said. “More than any other time in close to a decade, we have the chance to change our nation’s broken immigration system.”

Jun’s views were echoed by Reps. Judy Chu and Mike Honda, both D-Calif., who joined the riders outside the Capitol. Judy Chu, D-Calif., speaks outside the Capitol Wednesday in support of immigration reform and the DREAM riders. The riders, a group of undocumented students will be visiting nine cities over 10 days to raise awareness about immigration reform. (Rob Denton/SHFWire)

“This is a human issue – one with countless stories of trials and tribulations – and in our fight for comprehensive immigration reform, we must ensure fair and humane treatment of all human beings, regardless of country of origin and immigration status,” Honda said.

Immigration is often portrayed as a Latino issue in the media, but Yves Gomes an intern with the Asian Pacific Labor Alliance, an affiliate of the AFL-CIO, said that should not be the case.

“At the end of the day, immigration reform is not a Latino issue, it’s not an Asian Pacific Islander issue, this is an American issue that affects our communities,” Gomes said.

One in 10 undocumented immigrants is of Asian American or Pacific Islander decent, Gomes said.

The DREAM riders came to Washington about a month after the Senate passed a comprehensive immigration billthat would offer a path to citizenship and increase border security. However, Senate Majority Leader Harry Reid, D-Nev., has yet to send that bill to the House, where it is likely to fail.

With Congress scheduled to leave town this weekend for a five-week summer recess, immigration reform is expected to be addressed in September.

Earlier this summer the House Homeland Security Committee voted unanimously to pass a border security bill. With such bipartisan support for the first bill, the House may introduce other piecemeal bills instead of taking up the Senate’s comprehensive plan.

In the meantime, DREAM riders are taking to the road. They have already spoken with people in California and Washington and were headed to North Carolina on Wednesday and Thursday. They will be in Georgia on Friday and Saturday, Louisiana on Sunday and Texas on Monday and Tuesday before heading back to California.

Of the eight people that are on the trip, five are staff and supporters and three have received differed action.

“I am a DREAM rider that does not want to live in the shadows,” Jun said.

Editor’s note: This article was previously published by The Scripps Howard Foundation Wire.

Robert Denton is a senior journalism major at the University of Colorado Boulder, where he also studies technology and entrepreneurialism. Denton, a photojournalist at heart, loves branching out into different media, most recently exploring video and database journalism. He will be the editor-in-chief of the student-run news website, the CU Independent, during the fall semester and has held previous internships with The Greeley (Colo.) Tribune and with the multimedia firm Rich Clarkson & Associates. During his time in those roles, Denton has covered subjects ranging from gang violence to national rodeos and everything in between. In January Denton was able to participate in the first PBS NewsHour InaugBlog. He was one of 15 college journalists selected to travel to Washington for the second inauguration of President Barack Obama. Denton took photos of numerous events and produced interactive maps to showcase the content created in the three-day program. When not taking photos or working on a story, Denton enjoys Batman movies and website design. After his final year in college, Denton hopes to push the boundaries of contemporary journalism via alternate forms of storytelling.