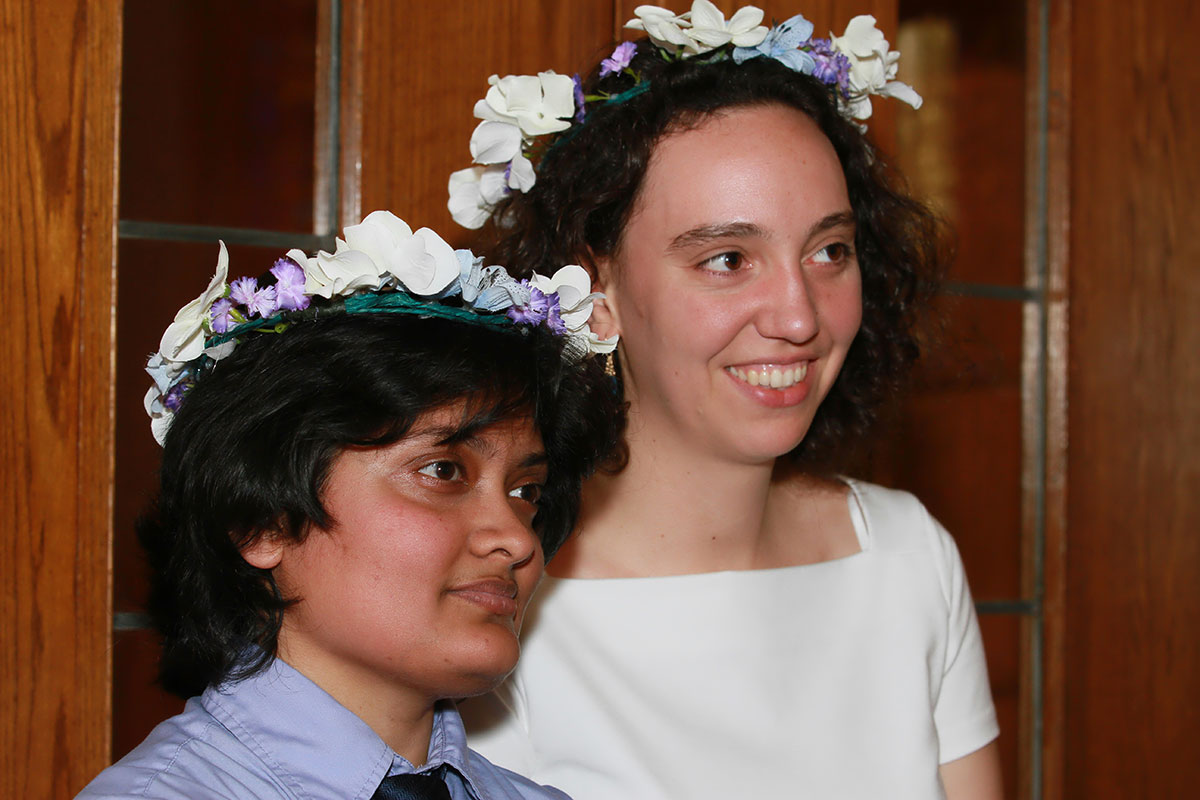 WASHINGTON – In the quaint and inconspicuous Lutheran Church of the Reformation, situated right next to the Supreme Court, a wedding is about to take place.

A crowd of media, LGBT advocacy groups and hundreds of National Immigrant Youth Alliance (NIYA) DREAMers, begins to find its way to the seats, setting aside signs and banners. The couple arrives minutes later. The bride is wearing a slim-fitting white dress, while the groom is sporting a blue tie and shirt. Both are wearing white flower tiaras. They look at each other frequently with a mixture of nervousness and excitement as they begin to walk down the aisle.

Prerna Lal, 28, and Lindsay Schubiner, 28, are a same-sex bi-national couple and they are about to participate in what they are calling the “first National DREAM wedding.” Ironically, they both believe that marriage as an institution is flawed.  “As a same-sex bi-national couple that does not believe in marriage – which we both see as a hetero-normative institution – the decision to marry was rather difficult,” said Lal.  This view was included in ceremony as they exchanged vows that they wrote themselves.

“I promise to honor you and our shared community, but not the institution of marriage,” Schubiner told her partner, “I commit to ensure that the 1138 rights we now have as a married couple, including the right to a green card, become available to all people regardless of their marital or immigration status.”

“I never thought I would find a home again,” answered Lal, “I’m never wrong, but I’m glad I was wrong just this once, I found my home with you.”

Lal’ and her parents emigrated from the Islands of Fiji when she was 14 years old and moved to California where she attended high school, college and grad school. Her parents eventually got their immigration papers but Lal was aged out of the process.

Lal later moved to Washington, D.C. to go to law school and become an immigration lawyer so she could fight her case, “But in the middle of all that I met Lindsay,” said Lal, “We fell in love and when DOMA came down she asked me to marry her.”

Now that Section 3 of the Defense of Marriage Act, more commonly known as DOMA, was struck down by the Supreme Court in June, Lal plans to go back to immigration court and file for a green card.

The wedding party in attendance consisted of mainly DREAMers, who celebrated a symbolic graduation earlier that day. These youth groups come from different states around the country ranging from New York to Texas.

“The alliance itself is only as strong as the local organizations are,” said Viridiana Martinez, Co-founder and community organizer of the North Carolina DREAM Team.

Colorado Congressman, Jared Polis addressed the audience of DREAMers expressing his support. “You represent the future of our country as aspiring Americans, our country will benefit greatly from the day you take your place along side those of us that are already citizens.”

After the wedding ceremony concluded, the DREAMers marched through the rainy streets of Washington and tried to make their way towards Capitol Hill, but were met with police opposition for their lack of permits.

Along the way, they shouted slogans like “Undocumented, Unafraid” and carried elaborate signs asking for a cease to deportation.

“We want to put pressure on the House of Representatives to pass this bill,” said Eduardo Samaniego of Georgia Undocumented Youth Alliance (GUYA). “We are here because we believe in the promise of America, of liberty, equality and freedom and we should defend that promise.”