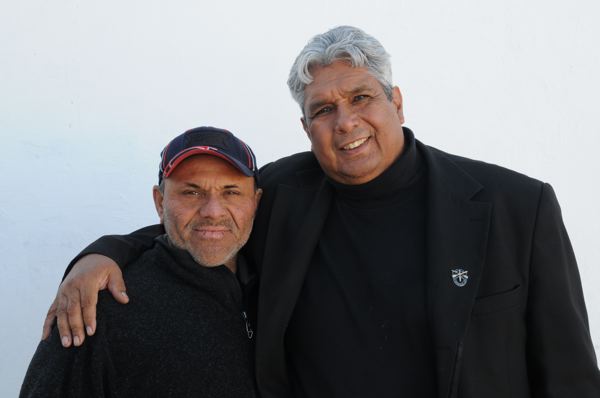 Pastor José Antonio Galván, right, runs an asylum near Juárez. With him is patient Josuá Rosales, who helps with its operation. (Courtesy of Morgan Smith)

CIUDAD JUAREZ, Mexico – It’s 6:41 Sunday morning, the phone rings and Pastor José Antonio Galván is on the line. He is the founder of Vision in Action, a mental asylum on Juárez’ western edge that cares for about 100 patients.

I’ve written a number of articles about Galván. I visit the asylum often and am always astonished that he has been able to maintain the facility with almost no government support for 17 years. On this Sunday morning, however, I feel doubt in his voice for the first time.

At least once a month, I drive from Santa Fe to the border. These trips always include a visit to Vision in Action, but in this case, I’ve also visited an orphanage called La Casa de Amor Para Niños in Palomas; another orphanage in Juárez named El Árbol de Vida; a rehab program for young women called Reto a la Juventud; and a food bank in Juárez managed by Our Lady’s Youth Center in El Paso.

Private citizens run all these programs, which are religion-based, even when they are not part of a specific church or religious group. They provide the kinds of vital social services that we are used to having our government provide in the United States. But those services simply don’t exist in this area of Mexico.

Galván is an extraordinary example of the courage and persistence that it takes to do this kind of work. Born in Juárez some 62 years ago, he married there and then moved to California where he had four children, one of whom is in the Seventh Special Forces and two of whom have advanced degrees. He worked as a crane operator on big construction projects and made good money until he became involved in drugs and was deported.

About 25 years ago, he was an addict living on the streets of Juárez. But then he experienced a conversion, recovered and has devoted his life to helping the mentally ill.

“People call them ‘basura humana,’ (human trash),” he says. “But I think that they are ‘tesoros escondidos’ (hidden treasures).” Elia (left) consoling her sister Leticia. Elia cannot speak but has the ability to calm fellow patients when they are agitated. (Courtesy of Morgan Smith)

His goal is not just to give them food, safety and shelter, but to try to make them productive again.

Vision in Action is not the only mental health facility in Juárez. I’ve twice visited the public hospital, La Libertad, where the facilities are much better and there are far more staff. The patients there, however, sit around like zombies.

Many of Galván’s patients are so damaged by illness, brain damage from bad drugs or genetic problems that they aren’t going to recover. All that can be done is to give them food, safety and shelter.

Others, however, have become highly functional in the asylum setting. That is a great credit to his ability to create a family-like environment and give these patients a sense of productivity, usefulness and dignity. This is astonishing to observe.

For lack of finances he has only one staff person who is not also a patient. As a result, the better functioning patients do almost everything – gather firewood in the desert, prepare and serve the meals, wash the clothing and blankets, clean the sleeping areas and care for his growing flock of chickens. They also provide much of the care.

Friday, for example, is shaving day, and the better off patients will shave and bathe the less capable patients.

Beyond that, there are many patients who watch out for the others. Elia Zoto, for example, is a tiny woman in her early 50s who can’t speak coherently. She can sense, however, when other patients might be feeling especially anxious, and she is always there to console and calm them.

In this asylum, she has an important role, a purpose. There is no way, however, that she could function outside.

Josué Rosales was born in Juárez but went to California at a young age, got involved in a gang and served almost 10 years in California prisons before being deported. The police brought him to the asylum in a stretcher, near death from drugs. But he slowly recovered and is now a leader.

In fact, he is the one who dispenses the medications to the other patients. He too is highly productive within the asylum but almost certainly couldn’t survive on the outside. Vision in Action, on the western edge of Juarez, has been operating for 17 years with almost no government support. (Courtesy of Morgan Smith)

Galván – to my knowledge, he has no formal mental health training and very little education – has an intuitive sense of what works with his patients: work, feeling productive and useful, believing in the dignity of others. Without his intervention and the program he created, most of these patients would probably be dead.

Nonetheless, he is struggling financially, as are many of the small non-profits that have taken on the responsibility of caring for Mexico’s needy, a responsibility that the Mexican government has abandoned.

Despite President Barack Obama’s recent meeting with Mexican President Enrique Peña Nieto, despite recent commentaries about how Mexico is becoming a middle class country or a center for automobile manufacturing or a country that is less violent, this total neglect of the most needy is an issue that haunts Mexico.

Unless Mexico begins to support Galván and the many others who are caring for the needy, it will never become a first world country that has international respect.

Morgan Smith is a freelance writer and photographer who lives in Santa Fe, N.M. He can be reached at Morgan-smith@comcast.net.