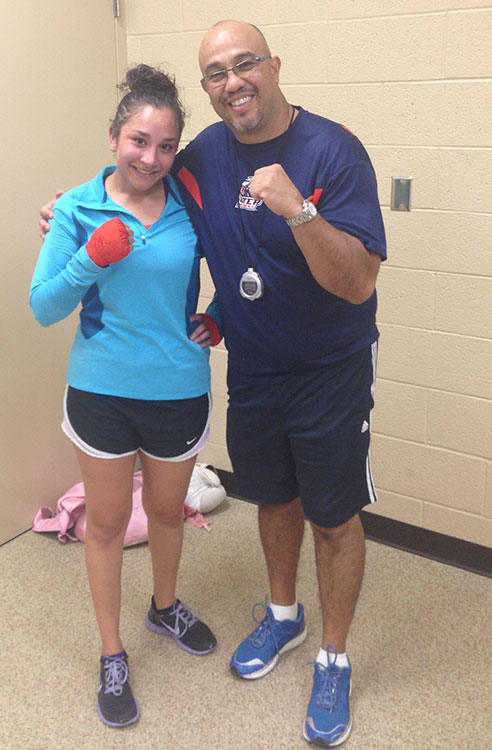 EL PASO – With the sour taste of defeat still in her mouth from last year’s Golden Gloves tournament, Amanda Ramirez went on a tough yearlong training program hoping to win this year, but she lost the bout in a close decision. Her will to push until she wins, however, remains undefeated.

The 23-year-old El Pasoan boxer, now a graduate of A&M, class of 2011, trained all year for the 71st annual Regional Golden Gloves tournament that took place on Feb. 15 at the El Paso County Coliseum but was defeated by Sasha Villalva in the Female Division, 135-pound class.

“I felt disappointed. I really need to work on pushing forward. My coach and I talked about this. I learned from it and saw I was able to improve and I know I can do better,” she added. Three fights took place in the Female Division, nine in the Sub-Novice Class and four in the Open Class at the tournament.

She had never planned to box. A cardio workout was all she was looking for when she stumbled upon a boxing gym in College Station, Texas, while an undergraduate at Texas A&M. “I started out by joining for cardio exercise and kickboxing. Someone saw my technique and asked me to join their boxing team and that is how it all started,” Ramirez stated.

It became something more than just a workout for her as soon as she was told how good she was. “It had to do a lot with encouragement. They kept telling me I was really good in the College Station boxing gym so I set a goal to it and I wanted to be better. I started taking it serious trying to perfect my technique,” Ramirez said.

She started the Golden Gloves campaign when she came across El Paso’s own Herman Delgado, a former heavyweight professional boxer.

In the El Paso Boxing Hall of Fame, Delgado put together a 12-9-1 record as an undersized heavyweight, and now trains Ramirez in her quest to win the tournament. “I got inducted in 2004 where I had 152 amateur fights, and I went to the Olympic trials in 1992 then turned pro right after the trials,” Delgado said.

He started out in the cruiserweight division as a professional but moved up a weight class for the money. Delgado says he achieved some success as an undersized heavyweight. “I fought three heavyweight champions of the world at that time, and current WBC world champion Vitali Klitschko and other prestigious former heavyweight champions such as, Hasim Rahman and Michael Moorer.”

Delgado, who started training amateur fighters said, “I have always loved the sport but didn’t really want to get back into it. It wasn’t until I was in the gym helping out and it just brought back the fire in me.”

The former heavyweight said, “Training people like Amanda just brought back that passion for the sport. I love her work ethic. She would question everything that was going on at first but now she just listens. She is a lady so I treat her differently than my male boxers. I have to respect her as a lady even though she is one of us.”

Ramirez lost last year’s bout at the annual tournament knowing exactly what she did wrong, she said. “There was only one fight for girls that got paired up. It was the only woman’s fight last year and I lost. I needed to become more aggressive. That was the main thing because I needed to go forward instead of letting her push me back. I also worked a lot on footwork and different combinations that I can throw.”

Delgado says he saw vast improvements over the year. “Her footwork, her strength and her body shots have all improved since last year. She is putting a lot more combinations together mixing in the body shots as well.” These are all attributes that will help her get over this hump and get that bad taste out of her mouth, he added, “She used to just go straight back, but now she is working her angles moving to the sides. She’s looking good this year.”

Fighters must make their weight in order to proceed on to the fight itself. “The most difficult challenge in boxing is making weight,” Ramirez said giggling. “Food is a challenge. I just have to have a healthy diet and of course I up my cardio so I can lose some weight that way. I weighed in at 138. The class I came in is at 132 and 141,” she added.

Ramirez has a degree in sociology with a minor in psychology from Texas A&M. She is now doing post-graduate studying at UTEP in hopes of becoming a speech therapist.

“Oh no, boxing is just for fun. I have always put school first and I am focusing on the school route but boxing definitely takes up my spare time,” Ramirez said.

I I am a Multimedia Journalism major, and will be graduating Fall 2013. I wrote for the Prospector for a year covering all sports. My aspiration is to become a sports reporter for a professional team in America.