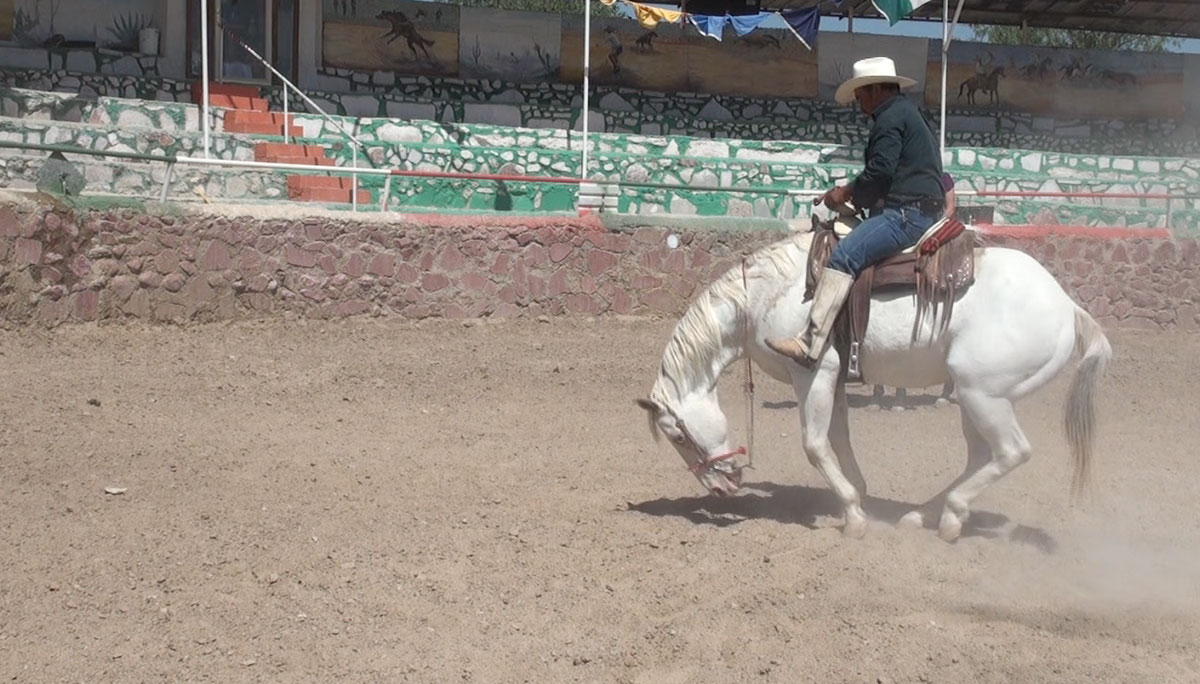 The Castros have built five lienzos, or arenas, in the area since 1970, when their father, Omar Castro II, began constructing them. The family operates a horse ranch and lienzo, along with a dance hall, in Canutillo, Texas.

Pedro Castro demonstrates a suerte, or event, that he and his horse perform in la charrería. (Steve Elliott/Borderzine.com)

The sport of charrería dates back to the 1600s, when Spanish conquistadors brought equestrian contests to Mexico. Ranch hands learned events, or suertes, while working with horses. This evolved into team competition, in which charros, or horsemen, ride and rope in front of audiences.

“It’s a sport our father taught us,” Omar Castro III, 48, said in Spanish. He is one of five brothers and one sister who still live on and operate the ranch with their siblings and offspring.

“It is the only sport that was born in Mexico,” he said. “It mimics what our ancestors did, who were ranchers. Each suerte tells the history and together they combine to become la charrería.”

The family credits the patriarch, Omar Castro II, who died four years ago at age 69, with keeping them together and instilling a sense of loyalty and tradition. Their mother, María Severa Pérez de Castro, died in 1982 and also loved horses.

“My father was like a little hen,” said Omar Castro III. “He didn’t let any of us leave. When we were growing up some of us wanted to leave. And he said, here, I’m going to make a lienzo charro for my kids to play in. So he made this lienzo and we started to play here with the horses. Then we wanted to be vagos (rebellious) and he said, No, no, no, I’ll build you a dance hall right here.’ And he did.”

Today, the family members continue the charrería tradition. The sport is their life.

They have won national championships in the United States at least 15 times. A trophy room at the ranch is filled with artifacts from the past, including medals, certificates, trophies, elaborate saddles, traditional costumes and family photos.

On the ranch in Canutillo, a town of about 6,300 northeast of El Paso, they currently keep 40 horses, along with several goats, dogs, cattle, chickens, and even a peacock.

“We are all in charrería,” Omar III said. Their father “never let us play football, basketball, none of the United States sports, nothing. Only charrería.” Teresa Castro, 50, hugs her daughters Lluvia, 6, and Crystal, 18, in the lienzo that Teresa’s father, Omar Castro II, built for the family and their horses. (Paulina Kababie/Borderzine.com)

Teresa Castro, 50, the only sister, trains girls and young women in escaramuza, a high-speed event in which women on horseback ride sidesaddle and complete precision moves.

“The girls wear the big dresses to compete,” she said. “They are beautiful and colorful. We use the skirts and petticoats, and they have to be (pressed) with corn starch, they have to be hard. So once the horse starts hearing that little hard sound, they know it’s performance time or competition time and they get very excited.”

While charrería is their passion, it is not the main source of the Castros’ income. They have continued to build businesses begun by their father, including training and selling horses, renting out real estate, giving riding lessons, and leasing out the ranch’s dance hall for quinceañeras and other events. They also grow alfalfa.

“They are a family that takes charrería to heart,” Reyes said. “If they go to a charreada or a training, they’re all involved and the youngest children imitate the older ones. They are very disciplined in their sport and are very united.”

The six middle-aged siblings are inducting the latest generation of Castros into the charro tradition. The children and grandchildren grow up working with and learning respect and love for the animals, Teresa Castro said. The youngest child, 1, is already learning to lasso.

“I have a day care and I bring the little kids over to see the horses and to take a look at the arena, and they don’t want to leave,” Teresa Castro said. “They feel a sense of security or just calmness around the area.”

“My grandfather, he started the charrería here in the United States, and he passed his Mexican tradition to my mother and my uncles, and now they are passing it to us,” she said.

Desfile de Charro (Charro Parade) The charreada begins with an opening ceremony, during which the charros parade their horses around the arena to salute the judge and spectators. The procession usually is accompanied by a band playing the “Zacatecas March,” a patriotic Mexican song.

La Cala del Caballo (Test of the Horse) The charro puts his horse through various exercises to demonstrate his ability to command the animal, as well as to display the horse’s own training and talents. Movements such as a controlled slide; half, full, and triple turns; mount and dismount; and reverse walk are performed.

Piales en el Lienzo (Roping of the Feet) This suerte consists of lassoing a mare by the hind legs and wrapping the end of the rope around the saddle horn to completely stop the animal. The rider has three chances to successfully stop the horse’s movement.

El Coleadero (Arena Bull Tailing) This challenge consists of catching a bull by its tail and pulling it to the ground. The bull is released from the gate and the charro rides alongside at full gallop. In order to score points, he must grab the bull’s tail, wrap it around his leg and bring it to the ground within a distance of 60 meters.

Escaramuza (Skirmish) The only competitive event in which women traditionally participate, the Escaramuza is a suerte in which a team of charras rides side-saddle and executes intricate equestrian exercises at a full gallop. Performed to music, the Escaramuza provides a colorful and exciting show.

Jineteo de Toro (Bull Riding) This challenge begins with a charro mounting a bull in a closed box outside of the ring. Once the bull is released into the ring, the charro attempts to remain mounted on the bull until it stops bucking.

La Terna en el Ruedo (Team of Three) Three charros work together in the ring in an attempt to rope a bull in this challenge. In order to succeed, one charro must lasso the head while the other two lasso the feet. The goal is to bring the bull completely to the ground.

Jineteo de Yegua (Mare Riding) In this challenge, a charro makes every effort to stay mounted on an untrained mare until it ceases bucking. A charro achieves this typically by holding on to the mane of the horse or to a rope.

Manganas a Pie (Roping on Foot) In this challenge, a charro on foot has three opportunities to rope a wild mare by its front legs and cause it to fall and roll once. The wild mare is herded around the ring by three other mounted charros.

Manganas a Caballo (Roping from Horseback) The object of this challenge is for a single charro on horseback to lasso a mare in fewer than eight minutes. While three other charros chase the mare around the ring, the competing charro throws his lariat to form a loop on the ground for trapping the animal’s front feet.

Lisa Button is an adjunct instructor and internship coordinator at the University of Arizona School of Journalism. She leads the School’s study abroad program in Costa Rica, which focuses on environmental reporting and launched EcoChronicle.net. Button holds a bachelor's degree in economics and a master's degree in journalism from the UA. Before teaching journalism at the high school and college levels she founded and published a bimonthly parenting newspaper for seven years. She grew up in a bilingual household and speaks Spanish fluently.