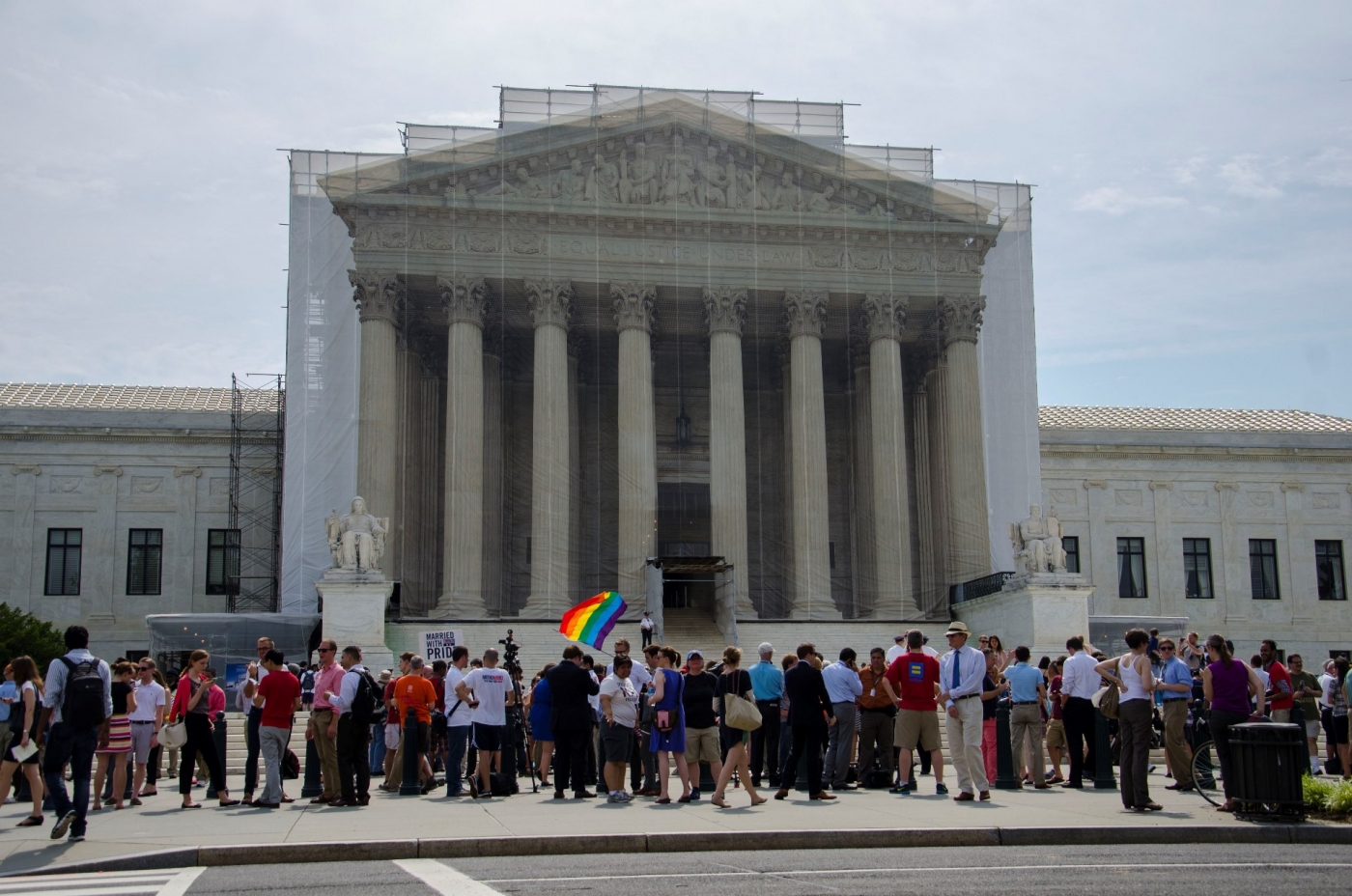 Dozens of people gather Monday outside the Supreme Court in anticipation of decisions about gay marriage, voting rights and affirmative action. The court sent the affirmative action in higher education case back to the lower courts. Decisions on DOMA and Prop 8 are expected this week. SHFWire photo by Deanna Del Ciello

Dozens of people gather Monday outside the Supreme Court in anticipation of decisions about gay marriage, voting rights and affirmative action. The court sent the affirmative action in higher education case back to the lower courts. Decisions on DOMA and Prop 8 are expected this week. (Deanna Del Ciello/SHFWire)

WASHINGTON – In a day full of discrimination decisions, the Supreme Court sent an affirmative action case back to a lower court and ruled on a critical aspect of the Civil Rights Act of 1964.

The court did not decide whether the University of Texas at Austin acted unconstitutionally in using race as a factor for admissions, leaving the debate over affirmative action unresolved.

“The particular admissions process used for this objective is subject to judicial review. Race may not be considered unless the admissions process can withstand strict scrutiny,” Justice Anthony Kennedy said, reading the court’s opinion.

Abigail Fisher sued the university after being rejected for admission on the basis that her spot was taken by a less-qualified minority candidate.

Fisher, who is white, said the university violated the Equal Protection Clause of the 14th  Amendment, which prohibits discrimination under law.

The university, which considers increasing racial minority enrollment a priority, uses race as one factor in admissions.

In a rare move, Justice Ruth Ginsburg spoke about why she disagreed with the Supreme Court’s decision after it was read. She said the university did nothing wrong, and has already proved that its admissions criteria were within the law.

“I have several times explained why government actors, including state universities, need not be blind to the lingering effects of ‘an overtly discriminatory past,’” Ginsburg said in her dissent.

The vote was 7-1 with Justice Elena Kagan not taking part, presumably because she was involved in the case when she was solicitor general.

Justice Clarence Thomas wrote a concurring opinion that read more like a dissent. He said he agreed with the court’s opinion that the lower court had not applied “strict scrutiny” in examining the issues.

But he said the university was making arguments that sounded like those made by segregationists in the 1950s.

The case began when a physician of Middle Eastern descent at the University of Texas Southwestern Medical Center and Parkland Memorial hospital claimed that one of his university supervisors was discriminating against him based on his race. He arranged to quit working at the university, but continue at the hospital (they are affiliated), and sent a letter to his supervisor’s boss, saying he was leaving because of his supervisor’s harassment.

The supervisor’s boss, saying that the doctor’s supervisor had been publicly humiliated by the claims, objected to the hospital’s job offer for the physician, which did not hire him.

The physician sued, claiming that the job offer was rescinded only because of his complaint about his treatment

The court still has a half-dozen opinions to issue, including two about gay marriage and one about Section 5 of the Voting Rights Act. The court will issue rulings Tuesday and may add one more day this week before starting its summer recess.

Caleigh Bourgeois is fascinated by almost everything and always asks questions. She decided to turn these pushy qualities into a career and has been pursuing journalism ever since. Going into her senior year at Ohio University’s E.W. Scripps School of Journalism, Caleigh has participated in a number of extracurricular activities and internships. Recently, she completed a news internship at NBC’s “Today” show in New York. Her daily duties included everything from assisting in editing, story writing, shooting video and the occasional coffee run. With passions for writing and meeting new people, Caleigh loves reporting and has created dozens of television news packages for Athens, Ohio, PBS affiliate, WOUB News. She also anchors and produces nightly newscasts and creates multimedia web stories for WOUB. Caleigh has also interned with WLWT, the NBC affiliate station in Cincinnati, where she shadowed reporters, edited video and wrote web stories. She also served as an online video producer for Ohio University’s Communications and Marketing Department, hosting, writing and editing web shorts. In her spare time, Caleigh enjoys adventures of any kind, running and biking. Along with her journalism major, Caleigh takes many history classes, a subject she has always been enamored with. She hopes to report on the major historical events of her generation, from all areas of the globe.