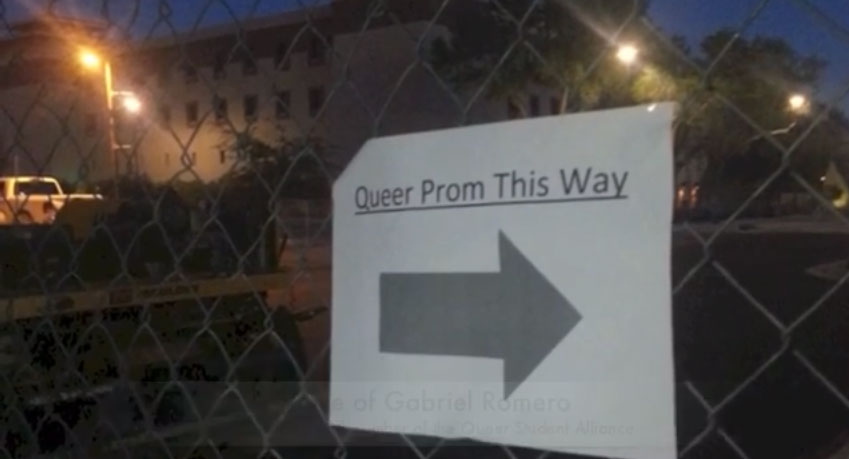 The 5th UTEP Queer Prom was sponsored by the Student Development Center, the Queer Student Alliance, the Rainbow Miner Initiative and the Campus Activities Board. (Andrea Castro/Borderzine.com)

EL PASO – Evening gowns sparkle and rented tuxedos shine in the fond memories of that special evening called prom night, but for Gabriel Romero the prom was just another high school event in which he couldn’t be himself.

Many young adults who are a part of the LGBTQ (lesbian, gay, bisexual, transgender and questioning) community, struggle with the lack of meaningful memories they have of their prom because they were either too afraid of coming out, or were not allowed to bring the date of their choice.

“I never went to my prom because at the moment I just couldn’t bring my boyfriend around,” said Romero. “I wasn’t ready to come out.” The 5th UTEP's Queer Prom was sponsored by the Student Development Center, the Queer Student Alliance, the Rainbow Miner Initiative and the Campus Activities Board. (Andrea Castro/Borderzine.com)

As a fun way to support those who may have been excluded from their prom because of sexual preference, The University of Texas at El Paso’s Queer Student Alliance organized its 5th annual Queer Prom at UTEP on April 13th.

About one fourth of all students from elementary age through high school are victims of bullying and harassment while on school property because of race, ethnicity, gender, disability, religion or sexual orientation, according to the LGBTQ Community Website.

Students such as Romero have reported being bullied at school because of their sexual orientation. “Being gay was something that just wasn’t accepted yet and I wasn’t ready for the attention,” said Romero. “Being a part of the Queer Student Alliance and helping organize Queer Prom is very significant for me because I’m helping a cause I truly believe in.”

According to PFLAG (Parents, families/friends of lesbians and gays), about 5 per cent of all gay and lesbian youth report that their parents reject them due to their sexual orientation and approximately 28 per cent of them drop out of high school because of discomfort (physical and verbal abuse) in the school environment.

“This is an event where the LGBTQ community can come and have fun and not be judged by who you are or who you date,” said Elida Alonso, Vice President of QSA. “It’s all about feeling comfortable and having fun.”

According to Alonso, Queer Prom not only gives everyone a second chance to have that one dance they didn’t get in high school, but is also a fundraiser for scholarships going towards LGBTQ students.

The purpose of the prom is to also spread awareness to every high school throughout this country, that proms should be open to one and all – LGBTQ and straight alike – so that everyone can be with someone special on that night.

“It’s symbolic for me to attend. I want to promote this and support this because of what this represents,” said Romero. “I think if queer prom gets the right attention and is supported by everyone, then I think it will open doors for high school kids who don’t get the chance to, don’t want to, or are too scared to go to their own prom. I found myself most comfortable at UTEP.”

The Queer Prom is sponsored by the Student Development Center, the Queer Student Alliance, the Rainbow Miner Initiative and the Campus Activities Board.