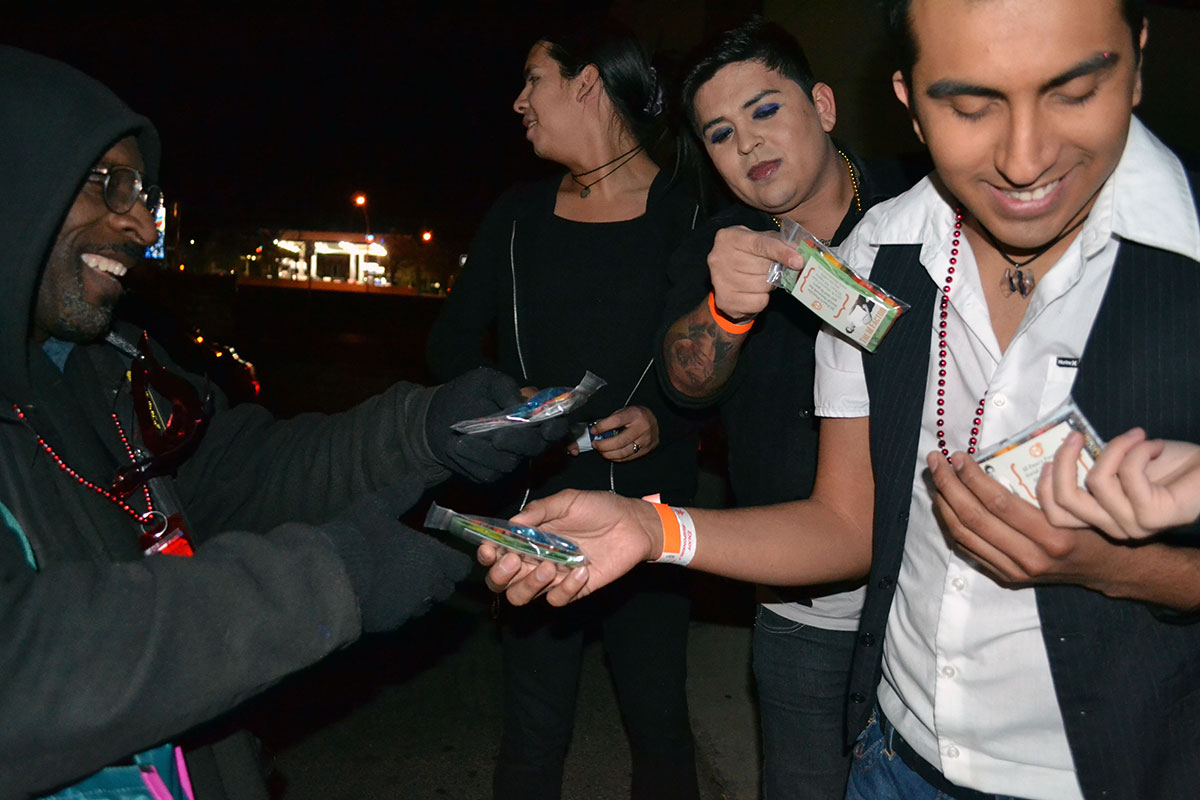 EL PASO – Five young adults wearing Mardi Gras masks and beads handed out baggies containing condoms and lubrication to persons in a crowd celebrating to the heavy syncopated beat of dance and electronica music on an icy-cold downtown street.

Members of The M Factor a local program, part of the national MPowerment Organization, went from bar to bar on Stanton Street where a large number of Lesbian, Gay, Bisexual, and Transgender (LGBT) venues are located. The baggies they passed out held two packages of lubrication, six to eight condoms, and one business card. Their goal is to teach HIV prevention and education and Mardi Gras was an opportunity to reach out to the LGBT community. “For the HIV testing program, we provide free rapid HIV testing, blood testing, free syphilis testing to the public, and free anonymous or confidential counseling services for them,” said Irene Ovalle, a public health supervisor in the Department of Public Health for the city of El Paso who oversees The M Factor and the HIV testing outreach programs.

“This program creates a social setting and gets men out of bars, sex clubs and risky situations and into more social settings where they can meet other men and talk and have conversations,” said David Peralta-Torres, The M Factor’s HIV Education and Prevention Specialist.

Ovalle has worked for the Department of Public Health for 15 years, and said that people don’t get the education they need about HIV, which is still highly stigmatized. “A lot of people think that if other people have HIV they are going to contract it just by a hug or mosquito bites, they think that you can pass it on like that and unfortunately we don’t have a lot of education; we still have a long way to go, and there is still discrimination in our community, especially culturally as well,” Ovalle said.

Peralta-Torres began his involvement with The M Factor about six years ago when he started volunteering at Planned Parenthood. “I was looking for a place to belong, I guess. I really liked the program and the message, which is all about safer sex and empowering young men to take charge of their lives and their health,” Peralta-Torres said.

Peralta-Torres has a background in education from teaching at Austin High School and said that because he was openly gay, students would come out to him and the most important thing was to listen to them, which prepared him for his career at The M Factor.

“We get a lot of guys and everyone has their stories, their backgrounds, and sometimes they just need someone to listen to,” Peralta-Torres said.

Emma Munoz, the program coordinator for the HIV outreach program at Aliviane, Inc., and HIV early prevention program, said that they provide an outreach program that does HIV counseling, testing, and education to the high risk population, which are the substance abusers, their partners, and the men who have sex with men, as well as the transgender population.

“The outreach workers go out into the streets, downtown, on Dyer, or alleys, different parts of El Paso, local downtown bars and do outreach, testing, harm reduction, which is talking to people who are high risk, and try to reduce their risk by either using lubricants, condoms, crack smoking kits, a safer crack smoking kit,” Munoz said. Peralta-Torres says that his organization wants to provide with a safe social setting where men can meet other men. (Michelle Blanks/Borderzine.com)

The M Factor’s goal is to “reduce the number of new HIV infection among young gay and bisexual men. The most effective way to achieve this goal is by educating, empowering, and uniting the community against homophobia, low self-esteem, and risky behavior among young men,” according to their mission statement from http://www.themfactor.org.

Peralta-Torres stresses the importance of the mission by expressing that this program looks into finding out why MSM (men having sex with men) were still engaging in risky behaviors and a lot of it was due to these men having low self-esteem, low self-worth, and no community to belong to.  According to Peralta-Torres they also don’t know how to negotiate with their partners about condoms how to use them, allowing the organization to find out that there are a lot of things contributing to HIV infections in the El Paso area.

According to Ovalle’s statistics on “Select Characteristics of People Living with HIV, El Paso,” in 2010 there were 1,617 reported cases, 649 were HIV and 968 were AIDS. Out of those reported cases 1,410 were male and 207 were female. “Here in El Paso, Hispanic males are the ones with the highest percentile of reported HIV cases, the MSM are at the highest risk, they are the ones that are really coming by and getting tested,” Ovalle said.

Peralta-Torres says that this number is relatively low compared to other cities in Texas, and that even though El Paso has a low amount of reported cases, there are 1 in 5 people who don’t know they are infected, and are out there infecting unknowingly.

“That is why we are out there doing this street outreach. We know that they are not going to come in and get tested for whatever reason, they don’t have the time, transportation, so that is why we go to them, and a lot of the sites where we do the testing we are finding a lot of people coming out positive that have never been tested,” Peralta-Torres said.