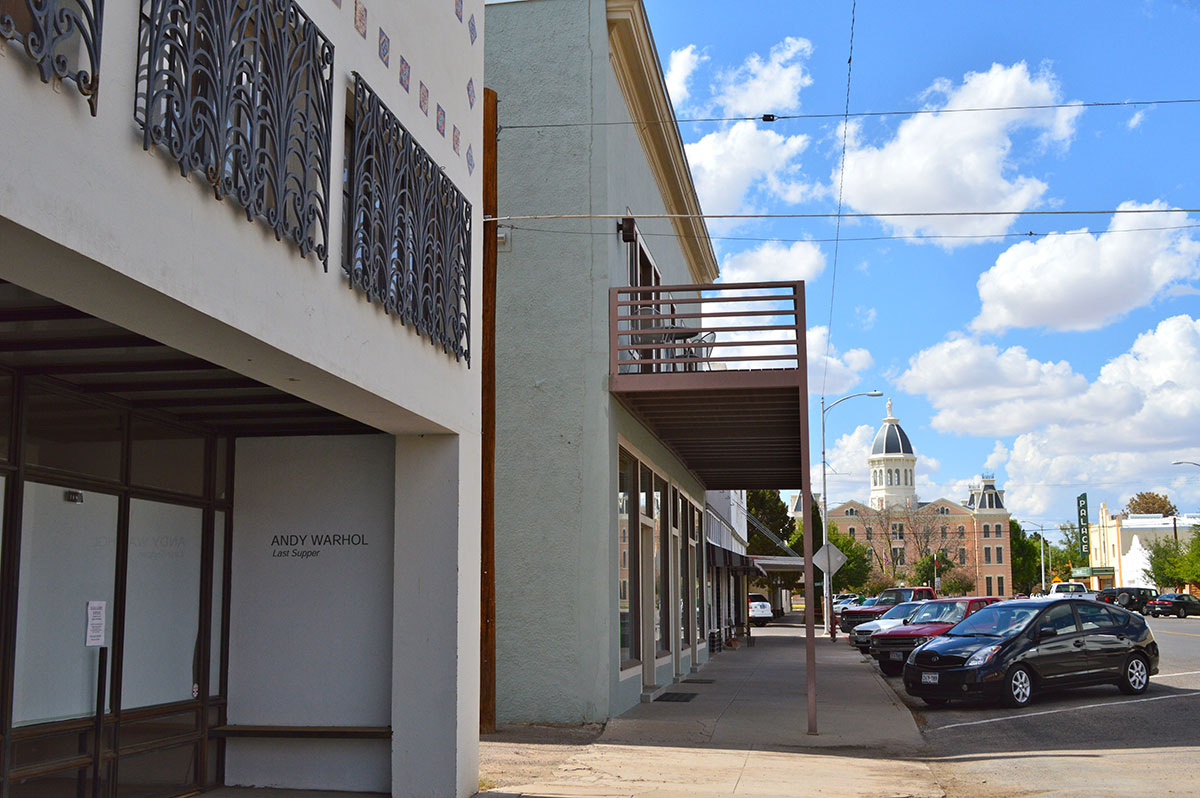 Marfa, TX, a town of about 2,000 people is a hub for contemporary art in the Southwest. (Amber Watts/Borderzine.com)

Willaford is the owner, director and curator of Galleri Urbane, with locations here and in Dallas, specializing in contemporary art. In Marfa, the satellite exhibit lounge is located at the Thunderbird Hotel.

“It was hard in that [Silver City] wasn’t a very great place for contemporary art,” says Willaford, “which is why we started looking elsewhere and found Marfa trending.” Marfa, TX, a town of about 2,000 people is a hub for contemporary art in the Southwest. (Amber Watts/Borderzine.com)

After two years of accumulating a buzz in Marfa with pop-up exhibits featuring only Burman and Jason Willaford, the family ended up moving their home and gallery to Dallas for their daughter’s education. Willaford says that although there are no plans to relocate back to Marfa, it is still the haven where her family goes to retreat.

“I loved [Marfa] – loved the nature, loved the sky, everything everyone says about Marfa you just fall in love with it,” Willaford says, “you’re in a small town, but it’s also like a city because you can go hang out and have a martini with fun, interesting people. We would have never met the people that we met there in any other town of 2,000.”

The aesthetic appeal of the west Texas town, with the old adobe buildings – including some that look closed down or condemned, but actually function as other contemporary art galleries or venues, is part of the mystery that continues to draw tourists to Marfa. Ty Mitchell, owner of the Lost Horse Saloon, says that the seeds for the art scene in Marfa started with Donald Judd and The Chinati Foundation/La Fundación Chinati. Judd’s admiration for preserving contemporary art transformed into a large-scale museum that sits on 340 acres of land on an old Army base, formerly Fort D.A. Russell, that accommodated families and soldiers during the Mexican Revolution. The Chinati Foundation’s presence and ultimate goal exist to conserve installations by contemporary artists. The organization also offers an Artist in Residence Programs as well as internships to international artists and curious students.

Mitchell says that while the art movement initially started with Judd, it has grown with the innate cultivating nature of the town.

“The cost of living’s cheap, it’s a great jumping off point for the Big Bend, and the culture’s set up to where it’s inviting for young people, or people young at heart,” Mitchell says.

The reality is that Marfa remains a quiet town, and while Willaford confirms wild parties can be happening everywhere one weekend, it can be extremely still and silent the next. The out-of-towners (mostly artists) who come to visit and then stay to make their homes in Marfa, keep up the adobe houses and west Texas flavor. Fortunately, for the artist and art appreciator alike, Marfa is a town where you definitely have to get out of your car and walk in order not to miss something.

“It’s not easy to get to Marfa,” Willaford says, “what you have there are people who have some sort of creative vibe – that were drawn there and I think sometimes people even expected more going on and after reading all the hype [about Marfa].”

As expressed by a few locals, the contemporary art scene has a tendency to invite in young crowds, and in turn these young crowds bring in film festivals and concerts to crack the countryside silence of the town. On some nights The Ballroom Marfa will host national acts like Sonic Youth and El Paso natives, At The Drive-In, and an upcoming Artists Films International event featuring New York-based artist, Alix Pearlstein from July 19th-September 8th.

From classic art to very expensive art, upscale-type galleries and somebody’s garage throwing some art up for the weekend, this west Texas town endeavors to keep the contemporary art culture alive. And although some locals like Mitchell say many tourists and artists come stay temporarily because of the landscape and big sky – some even end up moving to Marfa permanently.