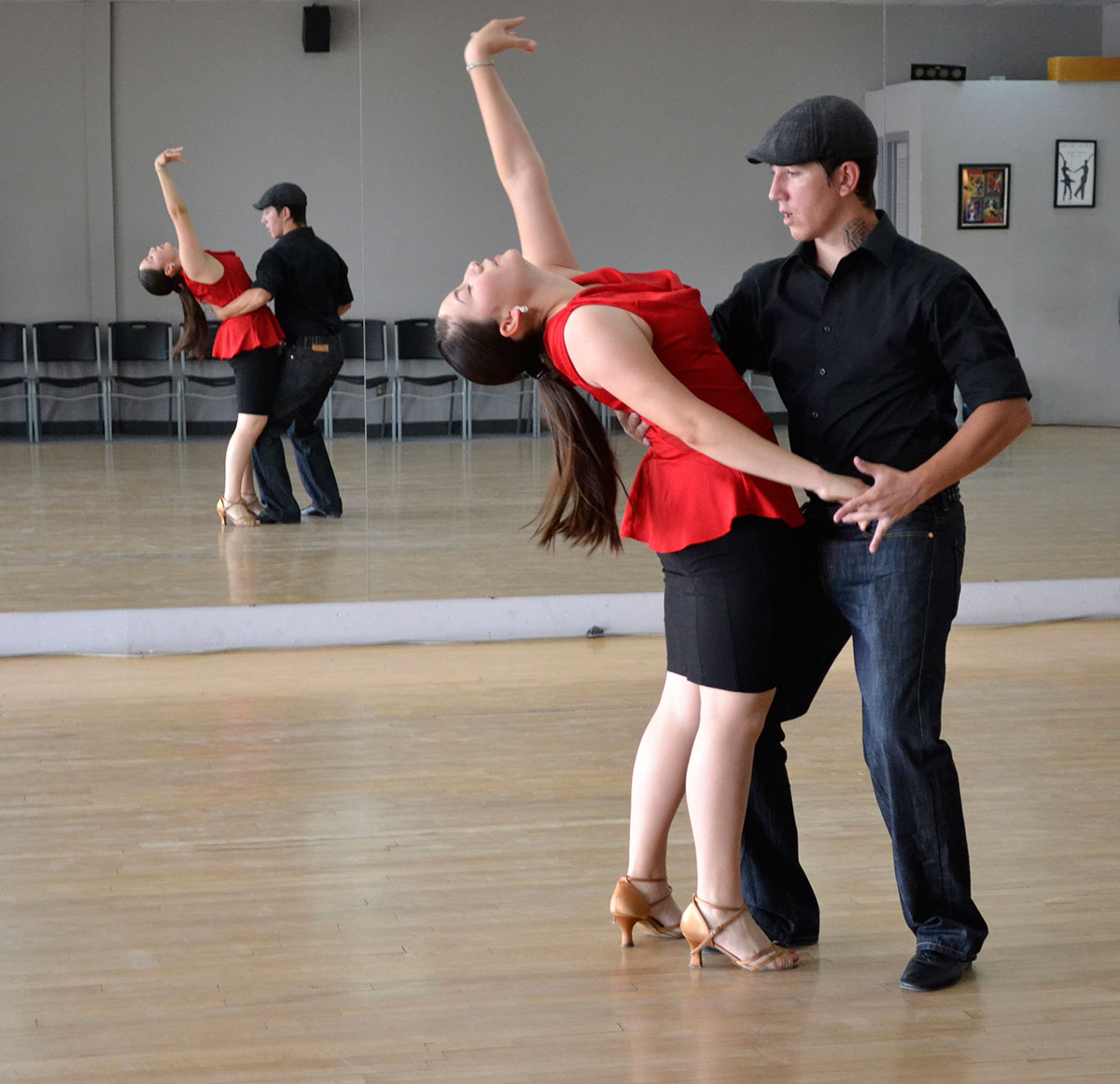 EL PASO – A studio tucked away in a little strip shopping center on the west side of town teaches ballroom dancing to dancers of all ages, from all walks of life.

The reasons why they came to this studio vary from curiosity to losing a bet, but they all share one thing in common – a passion for ballroom dance. “I loved it so much since it was so different compared to other movies like ‘Step Up’, which is all about hip hop,” said Garcia about the film.

“I remember my sister saying what is ballroom dancing,” said Cynthia Garcia.

“I said I don’t even think they do that here in this city.”

Despite the lack of certainty in the existence of ballroom dancing in the city, Garcia searched around town for a studio so that her younger sister could take lessons.

“She started calling around,” said Alyssa Garcia, “and we found out there’s actual ballroom dance studios in the city.”

The abundance of dance studios that teach ballroom dance is a relatively new phenomenon. Almost 30 years ago, the ballroom dance scene in El Paso was virtually non-existent.

“When I came to El Paso there was one dance studio with one on the way,” said Joanie Garcia, dancer, instructor, and owner of El Paso Dance Academy.

Garcia came to El Paso in 1985 from Sarasota, Florida where 30 dance studios existed in the city. Since then there has been an increase in partner dancing in El Paso and studios. Partner dancing not only includes ballroom dancing but tango, country western, and salsa dancing as well. While most teens her age will start their college scholarship search by going to websites, Alyssa Garcia will be looking at competitions for the summer with the possibility of receiving a scholarship. Garcia has been dancing for three years but at the beginning her friends reacted to the news of her ballroom dancing with questions.

Her friends also brought up the question of age. “Isn’t that [ballroom dance] for like old people they asked,” said Garcia. “I said not really, there is younger people too.”

“I think that our generation in particular has less interested in dancing than generations before us,” said Stan Huber, “I think more young people should take interest in ballroom.”

“I think there is a stigma especially around men where your friends are going to make fun of you if you dance,” said Huber, “ but they want an excuse to talk to women they just don’t want to be called silly for dancing.”

His advice for men contemplating whether to dance or not is to just try it. “It’s fun,” he says, “guys should just get over it and try it.”

Although some stigma may prevent men from taking up ballroom dancing, it has not kept all men from doing so. In her 35 years of teaching, Joanie Garcia has taught men to ballroom dance.

“I’ve taught a lot of guys and mostly they come in and they say dancing and they try to move their feet and they forget all the joints they have in their body,” said Garcia. One way she teaches them is by helping them realize that ballroom dancing is like playing football, basketball or swinging a golf club or baseball bat. “It’s all the same,” she says, “it helps them get past that misconception of I can’t dance.”

The misconception of “I can’t dance” does hinder people from trying ballroom dance but truth is anyone can dance so long as they are willing to learn.

“Try it,” says Cynthia Garcia “even if you think you have two left feet it’s ok because I have ten and I started with twenty.”

Having two left feet is not an excuse for not trying ballroom dancing, but there are certain factors to consider before trying it. Factors such as how far does a student want to go with dancing. Joanie Garcia does advise people who are interested in dancing to find the right teacher.

“A lot of people think they are not capable of it [dancing] and that is so not true,” she says, “it’s more about finding the right teacher, someone who is knowledgeable and experienced that knows how to get the student to where they want to go.”

However, a potential student does not have to be one who plans to become a professional ballroom dancer. Not only can ballroom dancing be fun but it can also be beneficial to a person. Specifically ballroom dancing can have health benefits.

“It’s a great way to stay in shape and be active,” says Huber.

Cynthia Garcia uses ballroom dancing not only as a form of art and self-expression but also as a fitness routine. “I saw I started to drop some weight so I thought that’s a good challenge,” she said, “I set a goal of dropping a couple of pounds and the more lessons I took the funner it seemed and the more weight I dropped so I used it as a form of exercise motivation.”

Along with the physical health benefits ballroom dancing can improve a person. It can promote and increase social interaction with others but more importantly it can become away to relive stress.

“We all have bad days but to be able to go and dance it off at the end of the day you’ve forgotten about it,” says Joanie Garcia “because everything kicks in like the serotonin in your body from just dancing so much that you’re in a happier place.”

There is more to ballroom dancing than what is seen on television of films. Ballroom dancing can be difficult. It requires a certain time and effort but that does not mean that only certain people can do it.

“It’s something anyone can do it they dedicate the time and effort” says Huber.

Although ballroom dancing may come across as a daunting task, people should not be discouraged.

“Go ahead and try and don’t get frustrated,” says Alyssa Garcia “because at the beginning it’s very hard but once you get use to it and actually understand it there are lots of exciting things to come.”

“Just give it a try,” adds Cynthia Garcia, “you have nothing to lose.”

3 thoughts on “¿Bailamos? An invitation to ballroom dancers of all ages”