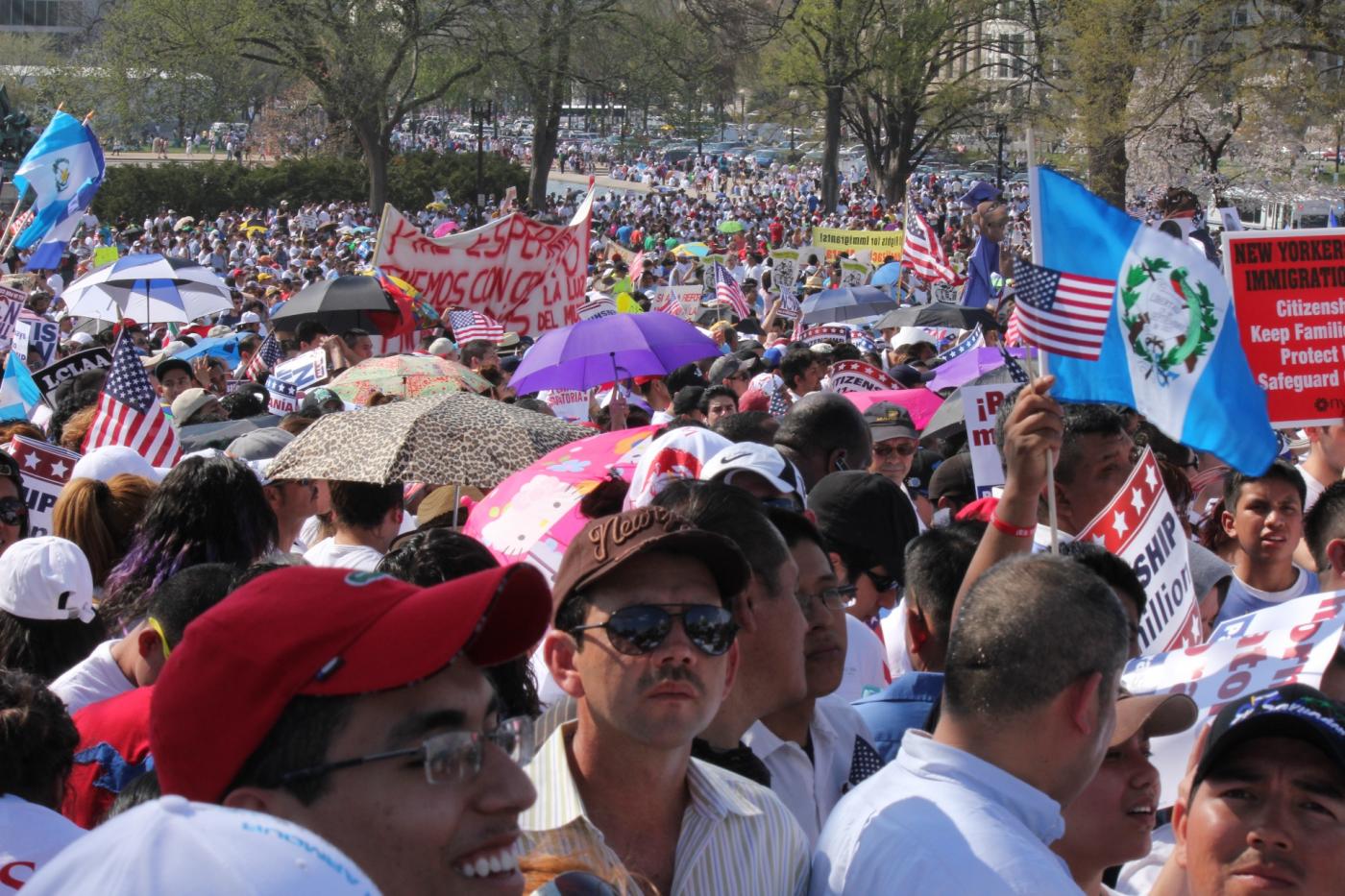 Thousands of people gathered Wednesday on the West Lawn of the Capitol in 90 degree heat to rally for immigration reform. Several organizations participated in the rally to push for a pathway to citizenship for 11 million undocumented immigrants. SHFWire photo by Jasmine Aguilera Thousands of people gathered Wednesday on the West Lawn of the Capitol in 90 degree heat to rally for immigration reform. Several organizations participated in the rally to push for a pathway to citizenship for 11 million undocumented immigrants. SHFWire photo by Jasmine Aguilera

WASHINGTON – Rosa Murguia couldn’t help but cry Wednesday as she recounted how she missed her last chance to see her brother alive because she didn’t have the proper documentation to return to the United States if she visited her native Dominican Republic.

Murguia, 62, of Sterling, Va., is one of thousands of people who stood in 90 degree heat on the West Lawn of the Capitol to rally for immigration reform that includes a path to citizenship.

“I think this reform should be to protect people,” Murguia said. “Too many people have been cheated and hurt, I’m one of them, it’s not right for hard workers to live in shadows.”

Gustavo Torres, rally organizer and executive director of CASA in Action, said the rally was three months in the making, and he was happy with the turnout.

“We are super excited,” he said. “When I was walking from Union Station, I saw just how many people were heading over and I knew then that there was no way the government can ignore our voices.”

Several immigrant advocacy organizations were involved in organizing the rally, including the Service Employees International Union, National Education Association and United We Dream.

Speakers included Rep. Luis Gutierrez, D-Ill., who was arrested at a previous immigration rally, Sen. Robert Menendez, D-N.J., a member of the “gang of eight” who introduced the first blueprint for immigration reform in the current Congress, and Rep. Joaquin Castro, D-Texas, who has pushed for reform along with his brother, San Antonio Mayor Julian Castro.

“We delivered the votes that delivered the states like Nevada, Colorado, New Mexico and Florida, so that the Democrats and these votes came with a great deal of hope and trust,” Gutierrez said. “I’ll tell you what I’ve been telling people across the country, work hard, push us – keep pushing us – and together we will deliver immigration reform this year.”

Chicano movement leader Dolores Huerta spoke at the end of the rally to express her support for immigration reform.

Many at the rally traveled from out of state – from Texas, California, Colorado and North Carolina.

A bill for comprehensive immigration by the gang of eight is expected to be released this week and on the Senate floor by May or June.

“For myself and for millions of our friends and neighbors, immigration isn’t just political – it’s intensely personal,” Castro said. “People like my grandma – men and women in all corners of the United States, of all ages and origins – have helped build this country. They deserve a system that works – and our country’s economy depends on it.”

The reform can’t come soon enough for Kimberly Ochoa, 13, Silver Spring, Md., whose father was deported to his native Italy six months ago. She was born in the U.S.

“We need something happening right now, and we cannot wait because many families are getting separated,” she said. “I’m confident that this is going to be a big help, especially for families and workers that are fighting.”