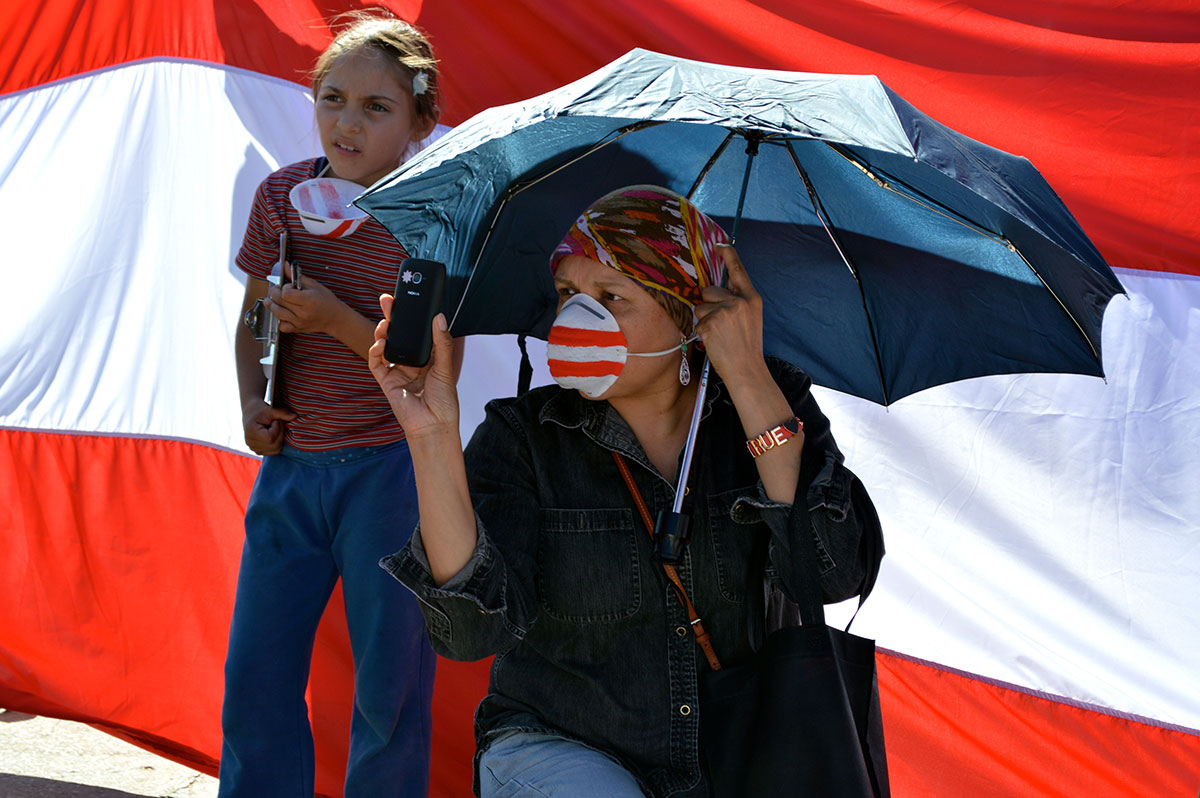 EL PASO – A large red and white striped flag waved in the wind as protestors made last-ditch efforts to stop the demolition of the ASARCO smokestack, which was erected in 1966 by the bankrupt copper smelting company.

After the plant was closed, the City Council decided on December 5, 2012 to take it and a second smaller chimney down. Because of environmental concerns and the company’s more than 100-year history in El Paso, protests ensued.

The two remaining smokestacks on the ASARCO property set for demolition on Saturday April 13. (Sarah A. Duenas/Borderzine.com)

The stacks are scheduled for demolition on April 13 at 6:30 a.m., but two groups – Save the Stacks and El Paso AWARE – are making last minute efforts to save the two structures.

Geoffrey Wright, president of the Save the Stacks, said that the group has received support from various sources. “What we have done so far is we have got the support of the Congressman of the United States. He’s been talking to the EPA,” states Wright. “We have the support of the State Senator Jose Rodriguez, the county judge, and several state representatives.”

This has been a long battle for Save the Stacks.

“We have been working on this thing for a long time and I can’t imagine we wouldn’t want to continue,” Wright said. “If you work on something for a year-and-a-half you probably want to go see it even if they irresponsibly destroy it.”

A large group of people from both sides of the border gathered at the International Boundary Marker #1 near the ASARCO site on April 6, wearing red and white shirts and masks. Protest leader Andrea Tirres speaks to protestors about the lack of asbestos testing. (Sarah A. Duenas/Borderzine.com)

El Paso AWARE (Answers Wanted on Asarco Remediation and our Environmental Health) led and organized the protest, along with members from Save the Stacks. Protestors spoke about unanswered questions and showed a petition to stop the demolition.

Protestors are concerned with the contamination inside the two smelter stacks. Save the Stacks member and protestor, Bill Addington, sums up what will happen on demolition day.

“ASARCO, which is highly contaminated, next Saturday is destined to be blown up, put in a hole next to our river and over our water supply about 25 feet over the alluvium of the river.”

According to Addington, ASARCO burned illegal hazardous waste in the stacks. Lorenzo Najera wears a red and white mask as he protests. (Sarah A. Duenas/Borderzine.com)

“We have documents that made the front … of the New York Times in 2006 in October that ASARCO illegally burned hazardous waste for nearly 10 years. Not a little bit … at least 400 rail shipments, thousands and thousands of tons of massive illegal and criminal hazardous waste.”

Among some of those illegally burned hazardous waste was, “…department of energy waste, waste from weapons cleanup sites from the Department of Defense.”

Many people in El Paso view the smokestacks as a landmark and do not want them demolished because of their historical aspect. Addington believes there is a bigger reason why these two stacks should remain up.

“For me the biggest issue is the contamination issue. The threat to human health and safety,” said Addington. “That’s the biggest reason I see not to thrown down the stacks, not the art or the history.”

On March 26, 2013, Citizen Anthony Martinez spoke to city council on the issue of placing a historical overlay on the ASARCO smoke stacks.

“We can’t go back once those stacks are gone,” said Martinez. “So the least we could do is have this discussion. The most we could do is actually have the city play a role on deciding what happens at that site.”

District 8 City Representative Cortney Niland motioned to deny action on the historical overlay. The motion passed with a 6 – 2 vote.

“The April 13th demolition date should be delayed until the technical reports can be reviewed,” writes Santiago-Lopez.

“These public officials that are supposed to be working for us … they have forgotten who’s the ones (sic) that elected them,” Najera stated. “And I hope that one of these days they will be held accountable because something will arise from this.”

Najera plans to view the demolition. However, they will not be the first stacks he has seen go down.

“Believe me it is going to be nasty because I saw the two stacks that were taken down from New Mexico that were from Phelps Dodge. They demolished them and there was a big plume,” stated Najera. “There was a big plume that followed, see all of these contaminants will travel for miles, and they have no boundaries.”

Beginning at 5:30 a.m. Saturday April 13, closures on the east bound and west bound lanes of West Paisano Dr. Entrance and exit ramps to I-10 at University Dr. and Executive Center will close will close at 6 a.m. with all traffic closing in both directions at 6:25 a.m. All traffic will be rerouted to Mesa St. and it will take approximately an hour-and-half to inspect and reopen the I-10 freeway, Executive Center Blvd. and West Paisano Drive. There are no set public viewing areas for the demolition.

Editor’s note: For information about road closures during the smokestacks demolition on April 13, please click here to download a pdf file.

Those who attended the protest tied red ribbons along a small fence by the International Boundary Marker #1. (Sarah A. Duenas/Borderzine.com)

Lorenzo Najera wears a red and white mask as he protests. (Sarah A. Duenas/Borderzine.com)

A former ASARCO employee participates in the protest. (Sarah A. Duenas/Borderzine.com)

Member of Save the Stacks, Bill Addington, protests the ASARCO demolition. (Sarah A. Duenas/Borderzine.com)

The two remaining smokestacks on the ASARCO property set for demolition on Saturday April 13. (Sarah A. Duenas/Borderzine.com)

Protestors asking the EPA to stop the demolition at an April 6 protest. (Sarah A. Duenas/Borderzine.com)

Protest leader Andrea Tirres speaks to protestors about the lack of asbestos testing. (Sarah A. Duenas/Borderzine.com)