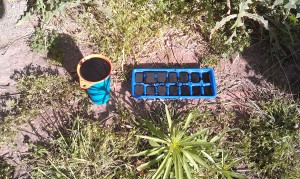 EL PASO – Armando Blanco pours fiberglass resin into a container and begins mixing in iron shavings, quartz crystals, iron oxide and other various organic and inorganic materials. Adding a catalyst he continues mixing and then pours the black chunky mixture into ice cube trays and places them in the sun to cure. Blanco, the founder of Orgonite El Paso, makes Orgonite, a product that he claims attracts positive energy and helps the environment. Through various art shows and local events, Blanco sells or barters his Orgonite. Orgone energy was discovered by Wilhelm Reich, a psychoanalyst, in the late 1930s and early 1940s.

EL PASO – The skyline in El Paso changed forever on Saturday April 13 when the two ASARCO smokestacks imploded leaving an empty space, a day prior to the demolition of City Hall. The stacks fell in slow motion, as if slowly saying goodbye to their longtime home. Viewing the demolition from the University of Texas at El Paso (UTEP) parking lot across from Interstate 10, I reflected on the experience I had writing a story on the last-ditch efforts to save the stacks. The stacks had a profound historical impact on the city and many people wanted to stop the demolition. The first event I attended was a protest lead by El Paso AWARE, an organization that focused on stopping the demolition until proper testing was done. 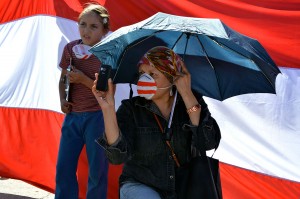 EL PASO – A large red and white striped flag waved in the wind as protestors made last-ditch efforts to stop the demolition of the ASARCO smokestack, which was erected in 1966 by the bankrupt copper smelting company. After the plant was closed, the City Council decided on December 5, 2012 to take it and a second smaller chimney down. Because of environmental concerns and the company’s more than 100-year history in El Paso, protests ensued. The stacks are scheduled for demolition on April 13 at 6:30 a.m., but two groups – Save the Stacks and El Paso AWARE – are making last minute efforts to save the two structures. Geoffrey Wright, president of the Save the Stacks, said that the group has received support from various sources.