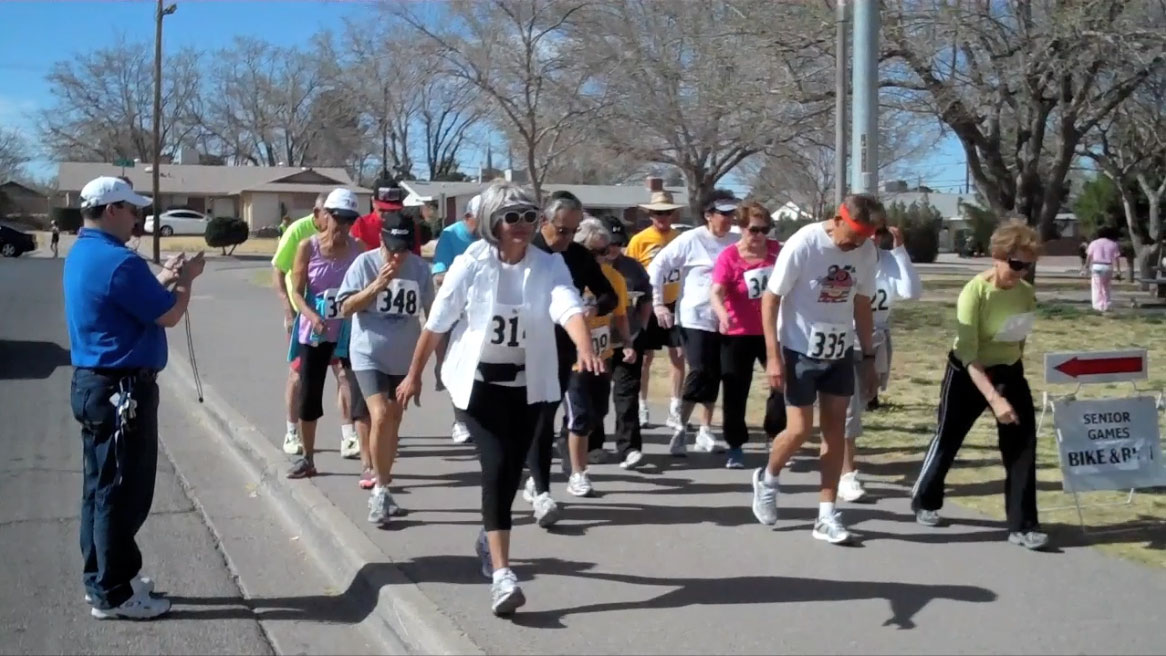 This year's Senior Games have over 300 participants that will compete in over 15 events. (Luis Barrio/Borderzine.com)

EL PASO – On a recent March morning, 76-year-old Armando Uranga sat on the gymnasium bleachers dripping sweat and catching his breath. He had just played a strenuous 20-minute game of basketball with three other competitors as part of this year’s El Paso Senior Games. After playing in the games for the last 12 years, Uranga considers them his fountain of youth.

“I felt like I was in my backyard like when I was a kid, it was so much fun,” said Uranga, who has already competed in the 5K walk, the 3K walk and plans to participate in Saturday’s track and field event at Montwood High School.

In its 31st year, the El Paso Senior Games are a beacon drawing residents to get out and be physically active or go watch the community’s senior athletes compete.  With a variety of events, the games are for persons 50 years of age and older who participate in activities ranging from swimming to cycling, basketball to track and field. This year’s games began with an opening ceremony on March 2and will conclude with a banquet May 3at the Hilos de Plata Senior Center. This year's Senior Games have over 300 participants that will compete in over 15 events. (Luis Barrio/Borderzine.com)

“Our goal is to provide physical activities for the senior community and provide exercise and wellness, along with creating more of a health awareness and setting an example for the younger generation,” says David Lopez, coordinator of the El Paso Senior Games. Lopez explained that before he took over as coordinator two years ago, participation by seniors was decreasing. That’s when he decided to incorporate more activities. This year there are more than 300 participants.

“We were dying for a little while; participation was dying and less people would sign up to compete. Event coordinators have added new events such as pickle ball, which has similar rules to tennis, as well as racquetball, a sport growing in popularity.

“We have over 300 participants that can compete in over 15 events,” he said.

The games have provided new challenges for local seniors as well as opportunities to compete at a serious level.  The activities and events also help create new friendships.

Dr. Guillermina Nunez-Mchiri, associate professor at the University of Texas at El Paso is pushing to raise community awareness and support for the senior games. She collaborates with Lopez to encourage UTEP students and faculty to volunteer at the games and serve as spectators. Volunteers help award medals, clock and record the times of the participants, and serve as crosswalk guards while the contestants are running.

“These people supported us, coming to our basketball games, football, and recitals while we were growing up, now they need us,” said Dr. Nunez, who chose “Fill the Bleachers” as this year’s campaign’s slogan. This Saturday’s marque field and track event will be at Montwood High School.  She is working diligently to “fill the bleachers” by distributing flyers on campus and asking students to help spread the word on Social Media.

She realizes it will take a village to fill the bleachers on Saturday.  “We need to work together, this is my community and it is such a noteworthy cause,” she said.

This week she enlisted the help of students and “their personal strengths” to fill the cheering section. “I want my students to learn from these people by seeing them in action,” she said.

Ben, 79, has been competing in the senior games for 29 years. As a young man he was a tri-athlete, but he now competes in the walking and swimming events. Asked about his motivation for continuing to compete every year since he’s been eligible, he said that he had two friends who passed away a week before the 5k walk on March 16.

“I went to a rosary on Friday and a funeral on Saturday,” he said. “Two of my friends died and as long as I stay healthy I’ll stay away from funerals and rosaries.” Ben competed in swimming events on March 9 and won eight medals in four competitions that included the swimming 25-meter freestyle, the backstroke, and the medley, which is a combination of swimming strokes. “I feel great and I’ll do this till the very day I die,” he said.

Marian Wolle, who uses a wheelchair, still finds a way to get up, get into the swimming pool and compete. She has participated in the games since 1995, holds 32 swimming records and has missed the games only once over the last 19 years.