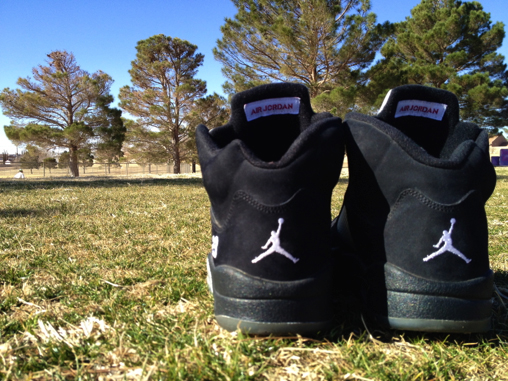 Is a pair of shoes really worth a life? (Ellisia Shaefer/Borderzine.com)

EL PASO – Winter cold is blowing and Christmas trees and lights are set up around the mall as a line stretches around the Cielo Vista Mall into the Foot Locker on the drop date for the latest Air Jordan 11 “Playoff” sneakers.

Worn by the National Basketball Association’s phenomenon Michael Jordan of the Chicago Bulls. The Jordan Brand has remained a popular and growing one-billion-dollar investment even after Jordan retired. Is a pair of shoes really worth a life? (Ellisia Shafer/Borderzine.com)

The release of a new model Air Jordan still causes a shopping frenzy among the so-called sneaker-heads – consumers who will go to any extremes to buy a pair of the shoes at an average price of $185 every month.

The fascination sneaker heads have with these shoes goes beyond just the Air Jordans, says Bryan Polk a sneaker-head living in Baltimore.

“I would say having a large fascination and want for sneakers and having a broad collection to choose from makes you a sneaker-head,” said Polk.

Polk who explains that he has gone to the extreme of selling his other possessions to purchase more shoes. Arguing that it’s about loving shoes and all types of shoes, Polk says he doesn’t have a favorite brand.

“I really can’t choose a favorite shoe,” he explains but, “[If I had to choose] I would have to go with Nike [Penny Hardaway] Foamposites.”

Other sneaker-heads value particular brands of shoe more than another, with the Air Jordan at the top of the list.

I can relate to Polk, my desire for sneakers has grown into a fascination that forces me to return at every release. Although my preference varies, when buying the latest shoes there is a passion. There are too many to choose from to proclaim a favorite.

I received my first pair of Jordans through my school’s basketball team. I still remember the excitement I felt in getting a pair. Most of all, thinking how people would react to see me in the brand.

Reflecting on that excitement now, I can truly say it came from the symbolization of such a brand. It meant status. In my neighborhoods and many around the world having a pair of Jordans meant you had money, or you were superior. A value that sends me to buy them just like every one else, because they are a must have.

After buying sneakers for several years I have become familiar with the process of distribution. Here’s what needs to be done to obtain a pair of sneakers. I have found that:

This way of distribution causes the frenzy of consumers still looking to purchase a sold-out item. The issue of violence comes up when consumers resort to other ways of obtaining the sneakers.

Due to the controlled level of distribution, some shoe owners have been targeted with violence because of their sneakers. There have been several cases of the incidents resulting in the death of those who owned the Jordan Shoe.

When asked about the violence surrounding the deaths of consumers due to their shoes Polk replied, “Yes around there were people who stood for hours for a pair of shoes purchased their shoes and got murdered for their sneakers, and it’s happened more than four times, sad to say.”

Recently it has happened again, only two months has passed and Houston mother Dazie Woods is still mourning the loss of her son Josh Woods who was shot to death after leaving the mall where he had bought the latest Air Jordan sneakers.

Sadly, there are many other parents like Dazie Woods, who question what can be done by manufacturers to improve the distribution of sneakers. Polk said that sometimes it is very difficult to get a pair of Jordan sneakers.

However , Polk argues the solution to the controversy surrounding death for shoes is simple, “I would say that they either lower the cost or make more of the shoes.”

On February 17th Michael Jordan celebrated his 50th birthday, which makes you think back on a time when he was the most famous icon in the National Basketball League, an era that gave birth to a shoe so many have grown to love, but the question must be asked – if a shoe is really worth a life?