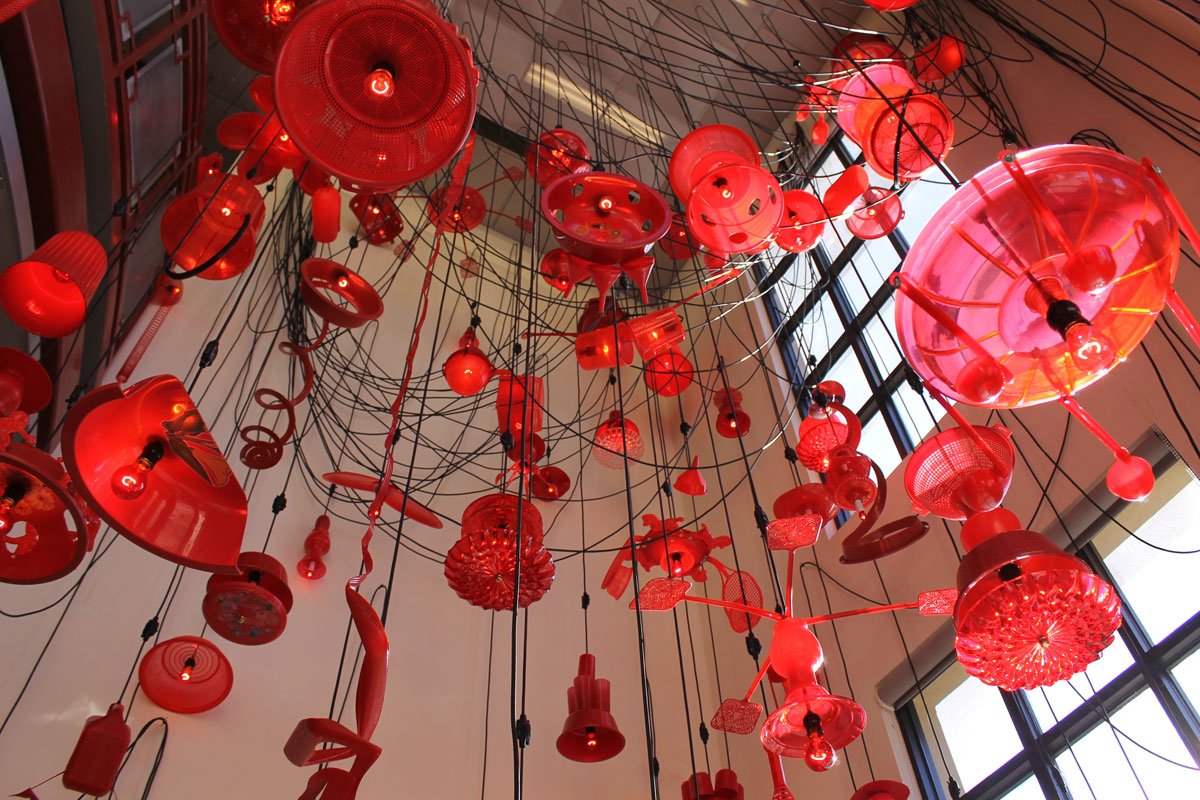 EL PASO – Spectators are entangled in an intertwined mess of black cords connected to a red piggy bank, red back scratchers and other red knick-knacks that transforms the entrance of a conventional public building into a world of obsessive red.

Maximo Gonzalez’s exhibit “Magnificent Warning” is one of the three current art exhibits featured at the Stanlee & Gerald Rubin Center at the University of Texas at El Paso. The exhibit will be showcased until March 15.  Gonzalez is a recognized Argentine artist who has left a profound mark in the art world. “The mission of the Rubin Center is to bring world class contemporary art to the El Paso region, and Maximo is certainly at the top end kind of the artists we bring. He’s got a really fantastic trajectory. His work is well known all over the U.S. and Latin America, so it’s great for people to have exposure to an artist like that,” said Kerry Doyle, Associate Curator and Assistant Director at the Rubin Center.

Doyle is responsible for community outreach, and curatorial assignments that center on contemporary Latin American art and cross-border discourse.

Doyle said she selected works from Gonzalez’ collection after a visit to Mexico City in September, concentrating on a range of works that are representative of the materials used and the physical concerns he had.

UTEP students had the opportunity to collaborate with the artist during the installation of the exhibit.

“We would have teams of students working on the installation of each piece, but we would have the artist lay out how the piece was supposed to be installed. They brought grids and graphs and students would work with Gonzalez or his studio manager, looking at them and figuring out how to put these intricate pieces together,” Doyle said.

Professor Rebecca Hendrick, a UTEP full-time art lecturer since 2002, said she believes the current style of art is a hybrid that sometimes merges two media. There has been a transformation in the art scene and she is very excited about the change Gonzalez brings.

“Art isn’t what it used to be and that’s a lot of times a disappointment for me. But Maximo’s show sort of redeems what young people are doing. I mean it’s new, it’s great, it’s original and it has depth. The piece in the foyer is just household implements that are all red.” Hendrick said. “I look up and I feel like I’m in some magical place, or else that I’m trapped inside my brain and I’m having a migraine.”

UTEP senior majoring in graphic design, Jacqui Muñoz, 25, describes the exhibit as “very thought-provoking” and after seeing a piece titled “The Machine That Eats Trees and Shits Tanks and TVs” for the third time, she believes the piece deals with the drug war in Juarez.

“He has the whole piece made out of currency paper. It portrays the process of the trees being transformed into TVs, as if talking about how TV deceives us about, for example, the drug war and how the media will say what they want to say to you, so you’ll never know what’s true and what’s not,” Muñoz said.

Doyle said it is important for students and the community to be exposed to artists like Gonzalez. His excellence comes from being able to work with a variety of media, and creating art that starts conversations.

“He also creates art that provokes discussion and dialogue in his pieces. They provide an opportunity to have an interesting discussion about the world that we live in and about the kind of hidden processes that are behind the politics and the economics of our lives,” Doyle said.

Hendrick said the materials used in the art pieces themselves add to the message of the piece. How the more one is attentive to the details, the more empowering the piece is.

“The more I look at the works, the more I discover about them, the better it gets. I mean those chili pepper army uniforms, I mean stuff like that, it’s just smart,” Hendrick said.

The exhibit is located in the L Gallery of the Rubin Center.  Doyle said Gonzalez will return to UTEP for a private event March 8.