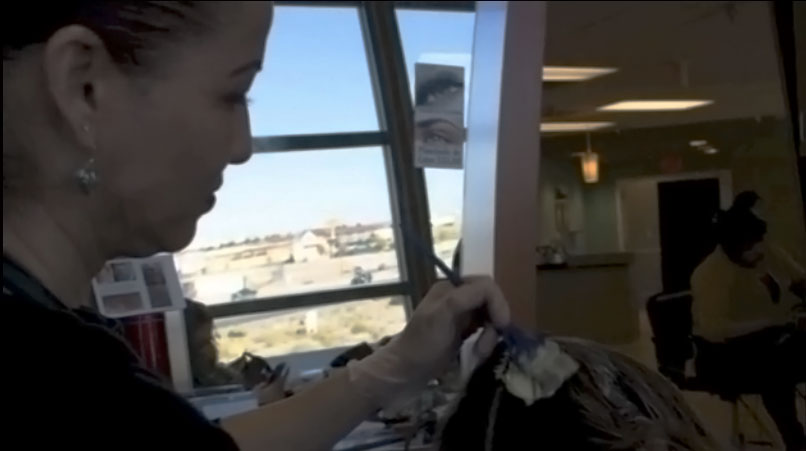 EL  PASO – Juliana Jimenez was shaved bald after giving herself a terrible haircut when she was five years old. At 17 she sprouted gray hair, which prompted her to start applying color. After that, she regularly cut, colored and styled her own hair.

The youngest of eight children, she says she was just trying to distinguish herself from her siblings. Her interest in cosmetology grew during the seven years she worked at J.C. Penney in downtown El Paso. It was just a few blocks from Sally’s Beauty Supply where she would go every other day to buy new colors, voluminizers and peroxides. Gradually she learned how to cover the grey in her own long, curly hair.

After working in the department store, a 24-year-old Jimenez quit her job as a service specialist to pursue her dream of becoming a hairstylist. That same day she went to the bank and cashed her $3000 savings bond to pay for her cosmetology education. Finding out that she was not eligible to receive financial aid was hard, but knowing that she could depend on her sisters to help her pay for school encouraged her to achieve her goal.

She then enrolled at Aladdin Beauty College, where she completed her course work within a year. Shortly after her graduation, her mother shyly confessed that she had also studied cosmetology but never had a chance to put it into practice.

Jimenez started her first hair stylist job earning only commissions at Regis Salon at Basset Place. She soon learned that she loved her work.

“There were times that I enjoyed my job so much that I would forget to pick up my firstborn son. That is until the school called me to pick him up,” Jimenez said. She eventually moved on to other El Paso salons – Salon Selah in 2001and Milan Salon and Spa a couple years later.

Jimenez and her sister then opened Melior Beauty Salon in 2005. Melior is a Latin word meaning “the best.” She said the transition to business owner was easy. “I didn’t have much stress and had many around me to help.”

Their business prospered. “In the first month we didn’t even have to waste a hundred dollars to cover start-up expenses,” said Jimenez, adding that the large number of paying clients covered their rent and electricity. Unfortunately, the business success was short lived and they sold the salon in 2008 due to the recession that shut down many other local salons.

She now works at De Stefano Salon and Spa, where she serves new clients along with those who have followed her throughout the years. Among her clientele is Velia Jaime, 36, who has been to Jimenez’ styling chair for seven years.

“When I first started as her client, it was the first time that I got highlights. I am very loyal to her, coming to her is almost like therapy,” says Jaime, who has Juliana do her hair at least six times a year.

“Besides being good at what she does, she has a heart of gold and treats everyone like her family members.”  Which is why Jaime recommended her co-worker Pricilla Juarez, 32, as a first-time client.

“I had a very good experience. She was very straightforward, she knew what she was talking about, being very kind and gentle with me,” Juarez said.

Jimenez emphasizes how blessed she is to have so many loyal followers and believes that she has gained clientele though her kindness and honesty. Yet, she admits that hairstyling is not for everyone. “People pay good money for your services and you don’t have the right to be sad or stressed.”

But this does not appear to be a problem for her. “When I am working I don’t think about any of my personal problems. There is not one day when I come out of work and say ‘Eww I don’t want to be full of hair.’”

Her career as a hair stylist has opened many doors. She tends to go to hair shows and conventions at least every two years. Here she recharges her inspiration. “It’s a good motivation seeing people on stage and around you loving what they do; you see yourself reflected in them. They show you that if you have the capacity to dream big, you can do it.” She also takes courses at the hair shows to stay current with the new styles. “You learn about everything new in the market.”

Jimenez is aware of the constant change in the fashion industry that tends to coincide with the beauty business. “The industry has changed so much, you have to update everything from your flat iron to hair products constantly.”

Although Jimenez is now a single mother of three boys, last year she took on the challenge of returning to school. She spent approximately one year at Tri-State Cosmetology School, earning hours to complete her classes to become a cosmetology instructor. She now attends classes during the day and serves her clients in the afternoon and weekends.

Looking forward, Jimenez is striving to complete two goals in her life. She wants to open a barbershop/beauty salon, a concept rarely seen in El Paso. After that, she wants to put her instructor certification to use by opening her own cosmetology school to teach beyond the basics and help others gain the knowledge she has acquired throughout the years.

Although Jimenez has worked since she was a teenager, she has no intention of stopping. “I’ll probably be dead the day I can’t do this anymore. I can’t picture myself doing nothing at the house – that will be the time I will say goodbye to this world.”