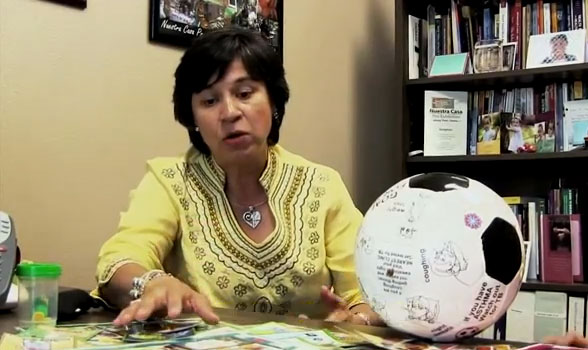 Dr. Eva Moya from the University of Texas at El Paso. (Diego Davila/Borderzine.com)

EL PASO – Tuberculosis has for a long time been a serious but waning disease in the United States with less severe complications in the large majority of cases, while people in other countries suffer greatly and die from a lack of sanitation, medical resources and information about this illness.

Even though this lethal infection is on the decline in the United States, it is still latent in more than one third of the world’s population. Mexico is one of the many other countries affected to a much greater degree. Dr. Eva Moya from the University of Texas at El Paso. (Diego Davila/Borderzine.com)

According to Professor Eva Moya, Ph.D., from the University of Texas at El Paso, although most people infected in the United States will recover from primary TB without further evidence of the disease, there are still deaths related to this disease. In 2011 there were more than 500 cases that resulted in deaths in he U.S. Unfortunately the number is much higher in Mexico where on average a Mexican man or woman dies from tuberculosis every six hours.

Many efforts are being made in all parts of the world by different organizations to not only try to stop the problem but educate and inform people about myths and realities about tuberculosis. This life-saving information is especially crucial in the borderland between the United States and Mexico where the risk of infection is higher because communication between people from both countries is constant.

La Tenda di Cristo is one of the biggest shelter homes located in Ciudad Juarez that takes in people that have been infected with illnesses such as tuberculosis or HIV/AIDS. This shelter home reaches out and offers help such as medical treatment along with moral support to overcome the challenges posed by these diseases.

It has taken hard work and dedication from individuals and institutions to maintain hope and support the fight against tuberculosis with the intention of spreading and sharing information about the disease, but most importantly preventing the spread of the disease and saving lives.