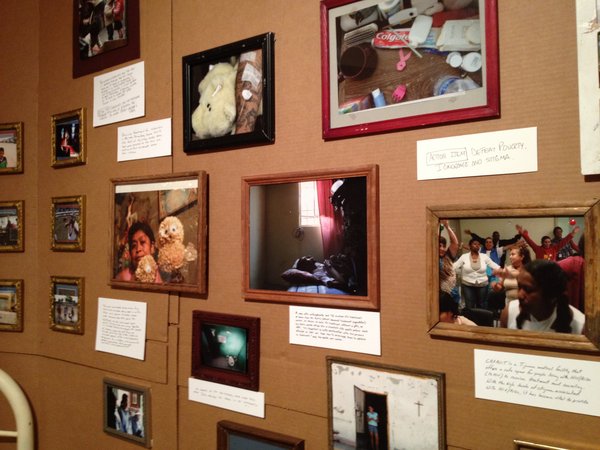 Nuestra Casa exhibition at the Univeersity of Texas at El Paso. (Danya Hernandez/Borderzine.com)

EL PASO — For three years a woman roamed the border region with an infectious disease, not knowing her health kept deteriorating and that she was endangering those closest to her.

This is the story of Rachel Orduño, a social work graduate student at the University of Texas at El Paso, who in 2003 began having a recurring cough. Doctors of both sides of the El Paso-Cd. Juarez border region diagnosed and treated her for everything from bronchitis, pneumonia, to the common cold. Nuestra Casa exhibition at the Univeersity of Texas at El Paso. (Danya Hernandez/Borderzine.com)

“I began with the most common symptoms. Continuous cough, weight loss due to lack of appetite, sweating at night and then I begin having trouble breathing,” Orduño said.

It took doctors three years to find the correct diagnosis, Tuberculosis (TB). A disease that most people disregard as “a thing of the past,” but which today affects one third of the world’s population.

“One third of the world population is living with the micro-bacterium, and that micro-bacterium is Latent, it’s dormant. And thank God it’s dormant, we don’t want it to be awaken,” Dr. Eva Moya, assistant professor at the University of Texas at El Paso who has been involved with Tuberculosis research and advocacy since 2005, said.

In 2010 there were 8.8 million reported TB cases worldwide of which only 5.7 million received treatment. As a result 1.4 million people died from TB in 2010, a disease that has been curable for more than 50 years.

“There are 250,000 kids that die every year from Tuberculosis, without a reason, having a cure,” Orduño said. “That is one of my motivations and the reason why I became involved in advocating.”

In the United States there were 11,182 reported TB cases in 2010, according to the Center for Disease Control and Prevention. The number of TB deaths in 2010 has not been reported by the CDC but in 2009 there were 547 reported deaths. That can be seen as 547 too many, taking into consideration that the average treatment cost per person is $13,000 for six to nine months of care according to the National Institutes of Health (NIH).

Lack of treatment or failure to continue treatment allows the disease to spread and become stronger. This is called Multi Drug Resistant or MDR TB, which the most dangerous strand but curable with a lengthier and more expensive treatment.

“With Multi Drug Resistance the treatment can be longer than 18 to 24 months,” Lupe Gonzalez, binational TB project manager with the Texas Department of State Health Services, said.

Here in the border region MDR can be considered even more dangerous because those who don’t complete their treatment might cross the border and lose contact with their doctor. A person with MDR TB can infect those closest to them with the same MDR stand of the infection.

Tuberculosis is spread through the air only. When a person with TB coughs, sneezes, speaks or sings the bacteria particles are left in the air. All it takes is for a nearby person to breath in the particles to become infected.

“Specially with Tuberculosis, anyone that breaths is at risk,” Orduño said.

In Orduño’s case doctors believe she had become infected when she was a child but she contracted the dormant infection called Latent TB. A person can live their entire life with Latent TB, it is only when the immune system becomes weakened that the infection begins to grow and becomes TB disease.

Orduño was diagnosed with diabetes one year prior to the TB symptoms. This could have been the factor that activated the TB infection.

“Tuberculosis likes to tag along HIV, diabetes, hepatitis, malnourishment, poverty, alcoholism, drug use. All of these people have low defenses and are more prone to becoming affected by TB,” Orduño said.

Although Orduño is completely cured today, a prompt correct diagnosis would have made a big difference in her case. During the three years of misdiagnosis the infection was allowed to progress. At the beginning of her treatment Orduño had to be isolated, her treatment lasted nine months instead of six, and she infected seven of her family members including her three-year-old niece.

“Only me and my niece were diagnosed with active TB, we received treatment together for nine months,” Orduño said and added that seeing her niece having to go through the same treatment was very hard for her.

It has been estimated that a person with active TB disease can infect about 10 to 15 people per year, according to the Center for Disease Control and Prevention.

In the U.S. there are higher numbers of cases in the border states. Texas is one of four states that reported more than 500 cases in 2010 along with California, New York, and Florida.  A report by the CDC notes that the four states combined, account for nearly half of all the TB cases reported in the U.S. in 2010.

In El Paso, Texas, citizens share more than just the border with Cd. Juarez. People travel from side to side commuting to school, work, or have family on either side of the border. This makes it hard to keep track of TB cases while making it easy for patients to stop attending their doctor visits and in worst cases stop the treatment.

As a joint effort to address the issue the Texas Department of State Health Services, El Paso City Department of Public Health and the Mexican Secretary of Health (Secretaria de Salud) created a bi-national prevention program called “Project Juntos.” The project was born in 1993 with a grant from the CDC.

Project Juntos has staff in both sides of the border that take care of testing patients for TB and administrating the treatment. The process is not an easy one since every sample or culture has to be sent to Austin for proper testing. Cd. Juarez does have the capability to do the basic test to identify the bacteria but not the culture test to subtype the bacteria, according to Gonzalez.

To make up for the lack of official community outreach by the city, bi-national private organizations, such as Solucion TB, have created initiative such as TB Foto Voz, created in 2008, and Nuestra Casa Exhibit currently showing at the University of Texas at El Paso.

“In 2008, that was probably the last time that I remember having a very well structured, organized outreach advocacy set of activities between Juarez and El Paso that engage and involve people affected by Tuberculosis. And that is what is so unique about that,” Moya said.

She explained that the difference between traditional outreach and projects such as TB Foto Voz, is that traditional outreach usually comes from health professionals and these projects involve people living with TB who have been treated, cured and now reach out to the community to share their personal experience.

“That element is a very powerful element. Because there is nothing like having an individual that has gone through the condition tell you that it’s real, it’s possible, that cure is the end, in terms of what you want to do when you access services, and that no one should die from this condition,” Moya said.

Both methods of outreach are important but she said they could have a bigger impact if combined, according to Moya. She explains that the city has lost ground in outreach initiatives and has missed the opportunity to involve the entire community of El Paso-Juarez, in the process by joining efforts with organizations such as Solucion TB, the University, and even advocates and survivors such as Orduño.

“What is necessary is that we look at what the two communities are doing, and we try our best to maximize and not just duplicate,” Moya said. “That’s the thing; you can’t do it alone, but imagine [involving] nursing students, clinical laboratory students, social work students.”