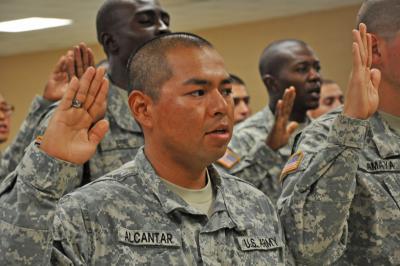 Pvt. Juan Alcantar takes the Oath of Allegiance to the United States during a naturalization ceremony at Fort Jackson. Alcantar hopes to become an officer now that he is a citizen. Photo by Kara Motosicky, Fort Jackson Pvt. Juan Alcantar takes the Oath of Allegiance to the United States during a naturalization ceremony at Fort Jackson. Alcantar hopes to become an officer now that he is a citizen. Photo by Kara Motosicky, Fort Jackson

Pvt. Juan Benjamin Alcantar and his wife were living in Chicago when he decided to join the U.S. military. At the time, he was going to college and working in a warehouse.

“It was hard to keep up on school and my duty as a husband,” said Alcantar, 25. “To me it [joining the military] is something that’s a great idea to do.”

It also helped him become a citizen.

Non-citizen involvement in the U.S. military has risen since Sept. 11, 2001, when the government increased benefits for gaining citizenship through military service.

When Alcantar compares his journey to that of his brother, he thinks he obtained citizenship more easily.

“My brother became a citizen outside the Army,” Alcantar said. “He paid a lot of money.”

The Army paid for all of Alcantar’s fees, took care of paperwork and helped him study for the naturalization test. These were all things his brother struggled with while he sought to become a citizen.

“The Army pays for you and you have more help in the Army,” Alcantar said. “If you have questions you can go to your drill sergeant. They would help me so that I would feel more at ease.”

His application was processed on the first day he joined. It took Alcantar a few weeks to become a citizen, whereas it took his brother months.

Another enlistee, Petty Officer 2nd Class Staci Lopez, had immigrated to the United States from Jamaica and obtained her citizenship quickly.

“You apply to be naturalized after you’ve lived [in America] for five years minimum,” Lopez said. “When you’re in the military your time gets cut. So, now if you join you can automatically apply for citizenship.”

Currently, Lopez is active duty, working toward a degree in business administration, and is a full-time mom. Before she considered the military she applied to be a police officer, but instead joined the Navy in 2003.

“I wanted to go do something with my life,” she said.  “I guess I prefer to be in uniform. I’ve always wanted to work for the government.”

The government passed the Immigration Naturalization Act in 1952. Included in this act are sections allowing individuals to become citizens during times of war. America has been at war since Sept. 11, 2001, and this has led to an increase in non-citizen military recruits.

“Without the contributions of immigrants, the military could not meet its recruiting goals and could not fill its need for foreign language translators, interpreters and cultural experts,” according to Margaret D. Stock in Essential to the Fight: Immigrants in the Military Five Years After 9/11.

In a 2005 study by the Center for Naval Analysis, almost half of Army enlistees in the 1840s were immigrants just like Alcantar and Lopez, and more than 660,000 military veterans became citizens through naturalization between 1862 and 2000.

Policy began to change for immigrants in the military after the attack on U.S. soil, and one of the biggest changes was the path to citizenship.

Non-citizens are eligible to join the Armed Forces as long as they have legally entered the U.S. A recruiter will ask for certain documents from the person seeking to join. However, proof of citizenship is not a requirement.

Wayne V. Hall, a U.S. Army spokesman, said that the military does not manage or grant citizenship. It is a matter handled by a division of Homeland Security — the USCIS, the United States Citizenship and Immigration Services.

Government policy outlines the documents needed to join. “In nearly all cases a Green Card is required for enlistment,” Hall said. “There are a few exceptions.”

The Defense Technical Information Center reports that about 8,000 Green Card holders enlist in the Armed Forces every year. Some non-citizens join the military because of the benefits they and their family members receive, such as expedited citizenship for family members and relatives.

There are several categories for which the military can screen potential soldiers, and standards for each branch differ. Among those categories are weight and height, number of dependents left behind and military test scores.

“The Army has a specific set of … criteria that is applied equally,” Hall said. “The Army can also adjust that criteria from time to time based upon the recruitment goal,” he said.

During a time of war for this country, U.S. residents are increasingly earning rights granted by citizenship, and they don’t have to be soldiers. But, Lopez sees the benefits in choosing that path.

Something she was able to do was vote in the 2008 election. Another reason she wanted to become a citizen was to have a chance to become a Naval officer.

“Eventually, as soon as I finish my degree,” she said. “You have to be in a certain age range. I’m close, but not there yet.”

“I was committed to be there,” she said. “You can’t quit. That was appealing to me.”

Alcantar finds comfort elsewhere. When he watched the news, it worried him. He said he had no interest in getting into trouble, but the possibility of losing his residency was very real for him.

“In a way, it [citizenship] means that I’m more stable in this country,” Alcantar said. “I don’t have to worry about getting my residency taken away. I have family in Mexico, but I’m already used to this life in the United States.”

Alcantar completed two life goals through his decision to join the U.S. Armed Forces — providing for his wife and obtaining citizenship.  While waiting for his citizenship ceremony, which took place last fall, he had hopes that everyone who applied received their citizenship.

“It was basically just raise your hand and you take the oath,” Lopez said. “It’s not an elaborate thing, but you distinguish your citizenship. You’re going to be solely American.”