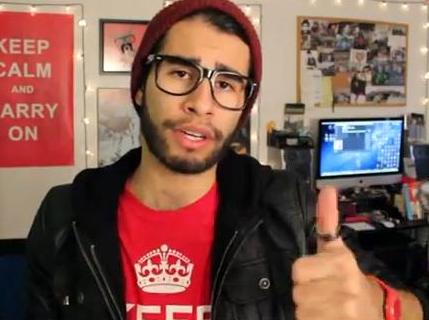 His college classmates would never guess that Josue Daniel Aguilar’s quirky Internet alias is Danny Boy and his comedy routine has been featured on “Hoy!,” Mexico’s national television version of the Today Show.

Fame comes from his vlog page called Jaguer-U where Aguilar, a UTEP Digital Media major, has posted over 120 quirky comic Spanish language videos that have attracted an estimated 11 million views on Youtube.  He’s also had some measure of financial success as funds flow in daily from product placement ads in his videos.

The self-made Internet sensation is living the American dream that any young ambitious 20-year-old would want but with a caveat. Until last November, when the U.S. government approved his application for Deferred Status from deportation, he was living in this country illegally. His new status means a work permit and permission to work legally for two years.

“I was never really in fear of being deported,” said Aguilar, who was brought to the United States from Mexico by his parents when he was 14.  “I felt embarrassed mostly because I knew I still couldn’t travel.”

According to local officials, there are currently about 15,000 young immigrants living in El Paso illegally who might qualify for Deferred Action for Childhood Arrivals (DACA), a temporary policy adopted by President Barrack Obama last year.

Congress is expected to consider this year an overhaul of the nation’s legal immigration laws, including a permanent version of DACA, also known as the DREAM Act. According to the Center for Immigration Studies in Washington, D.C., an estimated 12.5 million illegal immigrants live in the United States. Some reports say the number is as high as 20 million and growing.

Nationally, between August and September of 2012 over 82,000 candidates (mostly immigrants who were brought to the U.S. illegally as children) applied for Deferred Status. As part of the process during that time period, the government scheduled 63,717 fingerprint and background checks, reviewed 1,660 requests and approved 29 candidates, according to the U.S. Department of Citizenship, Immigration and Naturalization Services.

“There is no question that after the Presidential election, offices such as the Diocesan Migrant and Refugee Services saw a spike in the number of people applying for DACA, said Carlos Hernandez, a staff attorney for that organization in El Paso.

“Prior to that, no one really knew what would happen if (Republican Presidential Candidate Mitt) Romney won,” Hernandez added. “There was just more hope in the DREAM Act when Obama was elected.”

To qualify for DACA, undocumented immigrants must have entered the United States before the age of 16, are younger than 30, and have continuously lived in the United States for five years.  Also, they cannot be convicted of a felony, a serious misdemeanor, or be a threat to national security. The last requirement is that they must have a high school diploma, a general educational development certificate, or have served in the military.  Find more about DACA at http://www.nilc.org/dacaworkplacerights.html

Aguilar arrived in the U.S. eight years ago from Mexico City with his father, a pastor, who had been offered a job working for an El Paso church.

When his father’s work visa was not renewed the family remained in El Paso illegally. Aguilar, an only child, began attending a local public high school.

“This was a tough time for my family,” said Aguilar.  “We had never been to El Paso and had no family in Juarez. I also didn’t speak English too well and at the end of the day would come home crying because I did not know anyone,” he recalls.

It wasn’t until he joined the school’s soccer team that things start looking up. The Aguilar family, like many others living in the U.S. illegally, sought help from various lawyers to regularize their status.  “All they did was take our money while we waited – three years, fours years, things never changed,” Aguilar said.

He said the attorneys also stripped his family of their trust in the American legal system. Because of their illegal status, they were unable to travel within the U.S. or visit Mexico.

“In all those years, the furthest we could go for summer vacations or family trips was to Las Cruces [because there was no check point in between it and El Paso]. We would end up walking around the city just seeing the sights,” Aguilar said.

At the time, attending college seemed unlikely. “My father had lost his job and I had no way of paying.” But the humor and positive messages in Aguilar’s videos ended up catching the eye of the local Vino Nuevo Church.  The church invited him to serve as a motivational speaker at its annual youth camps that averaged around 2,000 teens and young adults, and was willing to pay for his travel and extra expenses along the way. The church was unaware of his illegal status.

About a year ago, a close friend of Aguilar, who was also in the country illegally, spoke to him about the Deferred Action application that he was filing with Diocese Migrant and Refugee Services in El Paso. The friend encouraged him to apply.

“My mother was very hesitant at first,” Aguilar said. “She could not forget how things were handled with our status the first time. She was not confident that this time around would be any different. So I got all of my paperwork ready and went alone.”

A spotless record in both school and society made Aguilar, Danny Boy, the perfect candidate. “I just knew this would be different, [after the filling] I felt safe,” said Aguilar who describes himself as a Christian. Now, in addition to his vlog channel, the college student has his own radio show on KVER 91.1 FM. It seems nothing can stop this go-getting college junior.

“There are a lot of valuable people out there, some [immigrants] may turn to crime, but most are just like me trying to make it and to just live. For all you know the next big business man, movie star, or great lawyer is out there. They just need the chance,” Aguilar said.

Despite Aguilar’s success on the Web and the fact that his videos include hot topics like Arizona’s controversial immigration laws, his fans and supporters are unaware of his immigration status because he has never wanted to bring the subject into his comedy.

Instead, his videos deal with his personal take on routine events – for example, “No kissing on the first Date!!!,” “I Hate To Do Homework,” and “What NOT to DO on Mother’s Day” –– and always end with some words of wisdom.

“It may sound strange, but I want to start contributing to this nation in a more positive way by paying taxes,” he said. “At first I always thought I would go back to Mexico City once I finished school, but now there is no place like El Paso and this community. This is my home.”