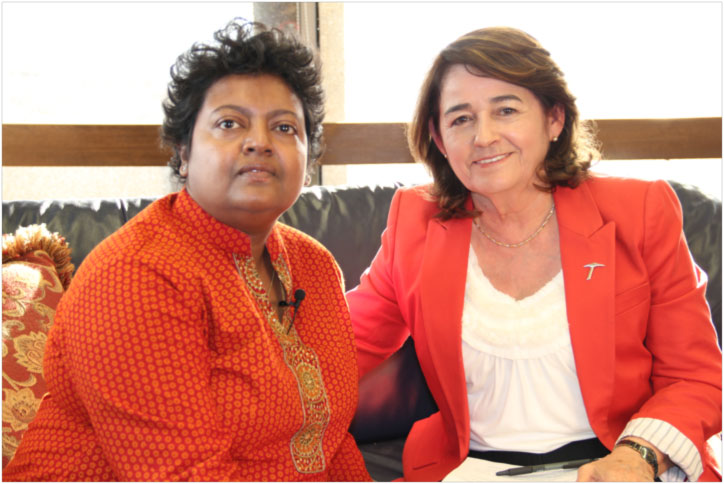 A moment from my interview with Dr. Josefina Tinajero (right) on October 12, 2012, at Education Building, UTEP. (Herman Delgado/Social Justice Initiative)

EL PASO – As a journalist-turned-academic, I was at a vantage point last fall when I decided to intern with the Media Changemakers (MCM) as its Media and Communication Specialist. On the one hand I was an outsider, a media professional who had years of experience in communicating with the community as a reporter and photojournalist; on the other, I was looking at the community from the point of view of the academy. Thus, I was able to straddle both sides as I worked with the MCM, an interventional platform of the Social Justice Initiative (SJI) of the University of Texas at El Paso’s Department of Communication. Dr. Lucia Durá was my mentor and Dr. Arvind Singhal and Bobby Gutierrez, my co-mentors.

This internship was part of my Community Literacy Internship service-learning class, which I took in the fall as part of my doctoral coursework in Rhetoric and Composition. Before returning to the academy as a doctoral student, I had heard a lot about the gap between thinkers in the ivory tower and the lives of people in the real world. However, as I read the theories of composition scholars during my service-learning class, I made a big discovery about the humble little hyphen in service-learning: it serves as a bridge between the concepts of workplace preparation and civic literacy, and between community action and knowledge. My internship was a great place to realize these academic ideals.

Since the SJI-MCM is concerned with social issues, particularly inequities in important areas such as education and healthcare, this was an excellent opportunity to understand what Composition scholar Dubinsky (2010) called “the tensions at the hyphen – between service and learning” and see how students could engage in problem-solving activities in the community using their academic knowledge and practical skills. Among the many projects that the SJI-MCM has, its innovative films, which aim at helping improve the lives of vulnerable people and communities by taking on deep-rooted social problems from interesting angles, provide a way to address problems in the community. Each semester, the students of UTEP’s COMM 4350 Media Changemaking class – under the guidance of Bobby Gutierrez – become the production team. A moment from my interview with Dr. Josefina Tinajero (right) on October 12, 2012, at Education Building, UTEP. (Herman Delgado/Social Justice Initiative)

As I interned with the SJI-MCM, my objective was to use my skills and experience as a journalist and writer to help build that bridge between the academy and the community. I accomplished a fair amount in the 16 weeks, although sometimes with modifications necessitated by practical reasons. Based on the expertise I could offer the SJI-MCM, I created templates for an SJI-MCM branded e-newsletter (as the editor, reporter and designer), wrote two articles about SJI-MCM for Borderzine, attended the fall edition of Just Story Hour and weekly SJI-MCM meetings with the COMM 4350 Media Changemakers class, co-led a script-writing workshop, participated in a free-writing session, and interviewed Dean Josefina Tinajero of the College of Education for a film aimed at encouraging enrollment in college. In addition, (as part of the requirement for my Grant Writing class) I produced a grant proposal template that SJI-MCM can use in the future. While writing this proposal, I came up with evaluation and dissemination strategies for our films.

As a future SJI-MCM intern may have realized by now, this internship has wide-ranging tasks that can prepare her for community-related work in the future. For instance, I learned how the bridge between the academy and the community is built when I interviewed Dr. Tinajero. We discussed the reasons behind an alarmingly high dropout rate in El Paso high schools, and the steps the university is taking to motivate students to join college. During this interview, I found out that the university has a program called Mother-Daughter/Father-Son (MDFS) that is designed to identify likely dropouts as early as when they are in sixth grade, involve their parents in a discussion about their education, and then follow the students’ progress through grade school. The idea is to try and convince both the students and their parents about the benefits of college education. Over the years, the bond thus developed between the academy and students and their families is proven to have gone a long way in ensuring that more students enroll in college.

At this point, I would like to say to future SJI-MCM interns that this service-learning experience helped mitigate a media professional’s skepticism about the ivory tower’s pertinence in the lives of the masses, and show how the academy can actually be made extremely relevant to the community. The MCM has in fact produced a variety of films in addition to the one on MDFS, all of which speak directly to the lives and concerns of people, and they are not just about people in the El Paso-Juarez border community but around the world in developing and under-developed regions. For example, Let Go of the Tiger’s Head, But Hold on to the Tail is about using the PD approach to help young girls face societal challenges in East Java; while The Music Catches Me and We Rise Again is a field-based account of PD as it was used in northern Uganda for successful reintegration of formerly abducted child soldiers and vulnerable mothers after over 20 years of civil conflict. As MCM members interact with communities in various parts of the world, the in-person effort results in relationship-building that we hope will help us disseminate newly produced films in the upcoming semesters.

This is not to say the going is always smooth. There have been challenges along the way, and learning to negotiate them is part of the internship experience. For example, initially I was assigned to write a script for the MDFS program film, but the group of students undertaking this project decided to take the scriptwriting into their own hands. They asked me to interview MDFS director, Dr. Tinajero, and from that footage, they would write the script. Also, during this time I watched a film on the making of the trilogy based on J. R. R. Tolkien’s Lord of the Rings, and realized that writing a script is a full-time job. Under the circumstances, Dr. Durá and I had to think on our feet and decide how best to help move the scriptwriting task forward. We held a free-writing workshop with the COMM 4350 students on October 30, to hand them tips and tools on writing scripts so that they can produce it themselves. We followed it up with a scriptwriting workshop to offer guidelines on how to start writing a script and giving it a structure. The lesson I learned from this experience is that we need to become proficient in the art of nimbleness. Sometimes it is necessary to improvise and be flexible according to the need of the hour.

Given the kind of projects SJI-MCM works on, I have been able to see first-hand how the ideals of democracy and social justice can be integrated into college curricula. Two of the methodologies that inform SJI-MCM’s projects, Positive Deviance (PD) and Liberating Structures (LS), have the concept of “social imagination” at their heart. PD foregrounds positive outliers in communities where the norm is undesirable, while LS is a group of facilitation techniques aimed at promoting free and original thinking. LS have been used to facilitate MCM interactions and in Dr. Singhal and Dr. Durá’s classrooms to tap into the collective intelligence of students. Thus, I also saw how education, which is often said to become what Colin Greer (2010) called “the rhetoric of good intentions,” can in fact be designed to prove otherwise. I realized that sweeping social upheavals were not the only way to bring about change; slow and quiet but effective changes can be catalyzed in the lives of people by opening conversations and actions through initiatives such as the SJI-MCM’s films.

I have always intended to return to journalism in a more meaningful way after delving into the rhetorical theory behind the practice. This internship provided me with an understanding of how to apply theory to practice. When I wrote articles for Borderzine, or created the newsletter, or workshopped with COMM 4350 students, I saw how my work could help spread the word about SJI-MCM media, projects, and events to a wider audience, both locally and globally. What makes this work meaningful to me is the fact that it is informed by critical reflection at every step, helping me become “self-reflexive” as the French thinker Bourdieu professed and practiced, to ensure that my work is not mere “serious nonsense.” After all, the purpose of applying academic thinking to practice is to produce communal good. As Dubinsky said (2012): “…when used with care and reflection, service-learning can be a bridge or a path toward virtue and can create ideal orators… and citizens who put their knowledge and skills to work for the common good.” Now as I wax eloquent about it, it makes me feel good in the spirit of the Roman rhetorician Quintilian; I hope I am “the good (wo)man speaking well.” When I return to journalism in the future, I hope to be the good journalist speaking well.

The Social Justice Initiative (SJI), under the auspices of UTEP’s Department of Communication, is committed to social justice actions through local, regional, national, and global programs, partnerships, publications, and products. The Media Changemakers is a program of the SJI whereby students sharpen their skills in producing, branding, and distributing media for social justice and change.

One thought on “Building Bridges: Internship at Media Changemakers shows me a way to connect the academy and the community”