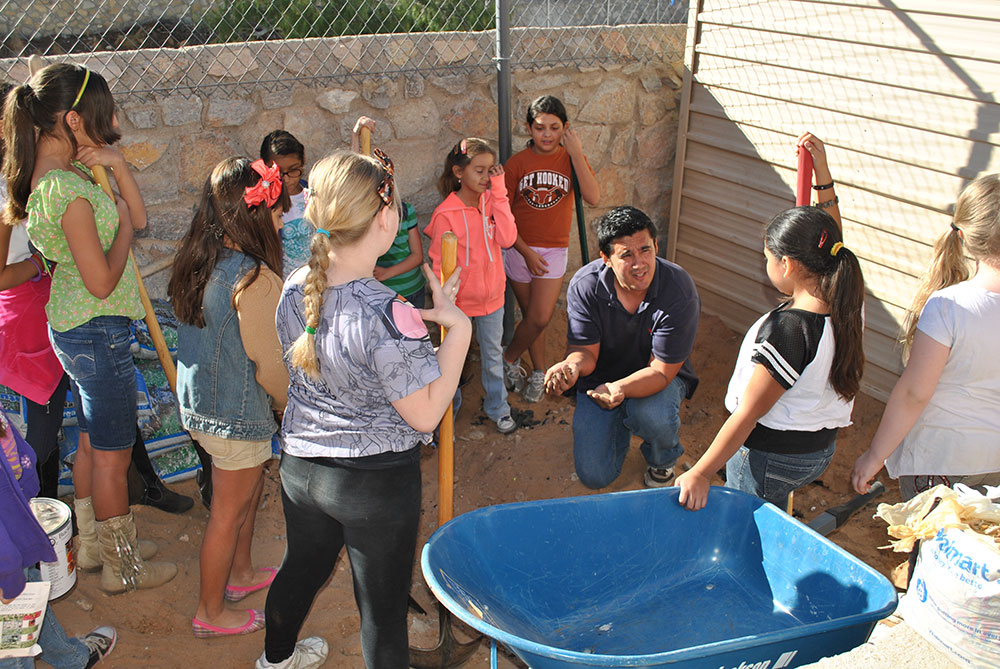 EL PASO – A once destroyed alleyway covered in syringes and broken bottles in downtown El Paso was turned into a thriving garden by a group of volunteers brought together by the El Paso Permaculture Group (EPPG).

“Permaculture is a way of life that helps everyone, and teaches you to respect the earth,” said Claudia Paolla, a volunteer with EPPG. “It teaches the children to learn about their food sources and to appreciate the environment.” EPPG invested staff time and money to set up the garden for nearby families and taught them how to tend the crops. Created about a year ago with the help of various activists and volunteers, EPPG continues to reach out to the community, creating gardens in local schools and unexpected places.

Permaculture is a growing movement that examines the issues and problems brought up by the way human beings relate to the earth. It addresses issues like job growth, food sources, poverty, and water sources through the development of agricultural ecosystems designed to be self-sustainable.

“This is a movement that is not going to stop,” said Carlo Mendo, co-founder of El Paso Permaculture Group and owner of Loft Light Studio at 315 S. El Paso St. “We are all human beings and need to work together for the future,” Mendo said.

Mendo, 26, got involved in the movement after his friend Robert Leal gave him a cilantro plant. He then began to wonder about food sources and decided to get involved. He now organizes the group meetings at his art studio. Roberto Leal, co-founder of EPPG, and other members of the group have the vision of growing gardens on every school in El Paso. (Josue Moreno/Borderzine.com)

Mendo said it is important for the community to have an independent food source for health reasons and even economic growth.

“Permaculture addresses many social issues from employment opportunities to shortages of water in our community,” Mendo said.

“Our vision is that every school should have a greenhouse or garden,” Mendo said.

One of the schools that benefits from the program is Somerset Charter School. The school started its own garden recently with the assistance of the group. Students, teachers and parents attended workshops to learn about permaculture and ways to grow their own food. Students from Somerset Charter School were very excited about the project. (Josue Moreno/Borderzine.com)

“The children were excited, they wanted to get to work and use a shovel,” Mendo said.

The volunteers were motivating the parents and children to work together and help each other. “It is amazing to see my children so motived and excited about this project,” Adriana Rodriguez, one of the parents, said.

Australian scientists Bill Mollison and David Holmgren began the permaculture movement in the mid-1970s. The concept was developed out of necessity due to droughts in southern Australia. The scientists began working with what was available in their environment and in the early-1980s the concept broadened from agricultural systems to sustainable habitats.

EPPG is on the process of acquiring land from the City of El Paso to build a community center where people can learn more about permaculture and become involved. According to Mendo, the project could take another six months before it is completed.