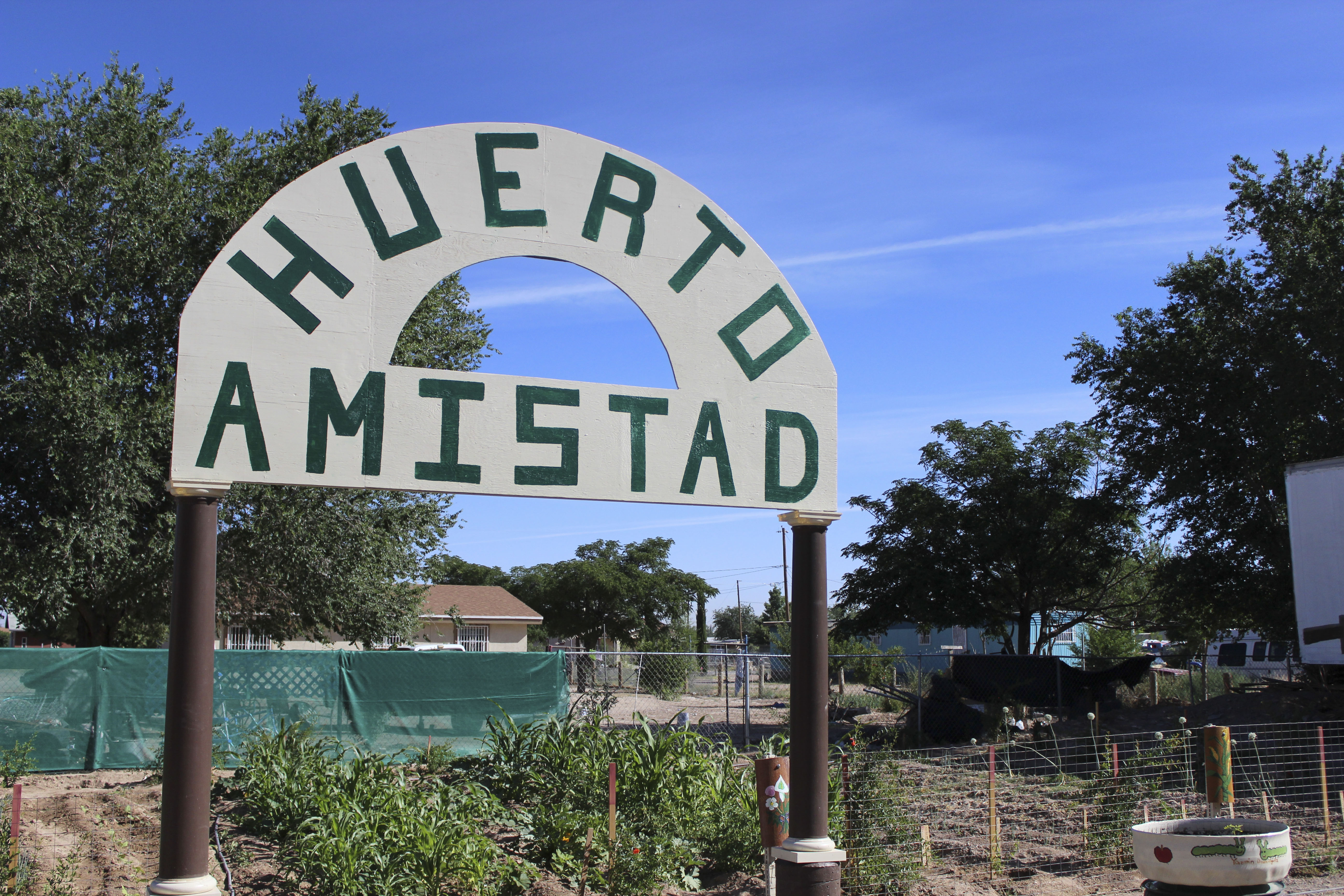 About 25 people participate in the Huerto Amistad garden on Beverly Ann in San Elizario. The garden was started in 2013. (Kirstie Hettinga/Borderzine.com)

EL PASO — San Elizario, Texas is a newborn city with a long history. The area was established in the mid-18th century as part of the Spanish colonial mission trail, but it’s only been officially incorporated since November 2013 and its first mayor took office on May 22, 2014.

The rich history of San Elizario is largely agricultural and according to Mayor Maya Sanchez, honoring those roots and protecting the rural community is critical.

“My family goes back five generations in San Elizario. It’s an agricultural community, historically has been. My grandfather was a farmer as well as his father before him and I inherited land that used to be nothing but fields,” Sanchez said. About 25 people participate in the Huerto Amistad garden on Beverly Ann in San Elizario. The garden was started in 2013. (Kirstie Hettinga/Borderzine.com)

Before committing to the incorporation efforts and running for mayor, Sanchez launched a community garden in San Elizario in 2012, with help from County Commissioner Tania Chozet.

Sanchez said that her garden is “sleeping right now” while she focuses on getting the city up and running, but other community gardens, such as the Huerto Amistad have sprung up and further launched local efforts toward sustainability.

In the United States, the community garden movement dates back to Victory Garden efforts during WWII and interest has remerged in an era where it may take weeks to get a reservation at farm-to-table restaurants such Blue Hill at Stone Barns in New York.

In San Elizario and El Paso, the goal is to keep the locally grown produce in the community. The Huerto Amistad garden on Beverly Ann in El Paso is an offshoot of Project A.Y.U.D.A. Inc, which established 18 years ago by a group of women, offers various community and public health services to low-income residents. Director Olivia Figueroa said “Right now we have approximately 400 families registered, because it’s by family, and if we multiply that by 5 or 7 people living in one house then we’re talking about thousands.”

The garden, which is about 30 by 60 feet, was started in 2013. About 25 people participate regularly in the garden and the community hosts weekly informational sessions on Wednesdays that includes lunch, which may be cooked in the outdoor oven that was built by hand.

Olivia Figueroa said, “We’re now applying for funds to build an industrial kitchen for the people in the community who are growing, so that they can come and process their produce, in salsas and canned goods,” so that they can enjoy the fruits of their labor all year long.

Volunteer Jorge Figueroa said one of the goals is to teach people how to do things that will benefit them and their families in the future.

Denise Rodriguez, a county extension agent for horticulture through Texas A&M’s Agrilife Extension, said, “We need to make sure we have everyone all lined up. Everyone can bring certain things to the table, whether that’s being able to gather and leverage resources, that’s really important, and then you want to make sure you’re going to have those people who will really dedicate their time to the garden… It takes a lot of combination of a lot of different types of people to be able to get that garden sustainable.”

According to Rodriguez, the El Paso area has had watering restrictions since the 1990s. “To us, that’s become part of the process as far as planting. We encourage the use of low flow irrigation covered with mulch… so we keep that water in that soil profile and keep it from evaporating. We have very high temperatures but we also have very low humidity so that tendency for the water to evaporate and get lost into the atmosphere is very high,” she said. A canal in the El Paso region in the early 1900s. Used with permission of the University of Texas, El Paso Special Collections Library.

Sanchez said, “Our water, it’s really in short supply so teaching them about resources and being able to sustain for the future isn’t just because of what’s happening with global warming and all of that but it’s something that’s happening in our own backyards.”

Huerto Amistad helped address its water problem by digging its own well in March 2013. The well, 30 feet deep and dug by hand, runs on a one horsepower engine and provides the water needed to keep the garden going. It also drastically reduced the water bills for A.Y.U.D.A. Inc. Rodriguez said that living in this region has its benefits. “We’re really lucky in El Paso, believe it or not, because we’re able to garden about 11 months out of the year,” Rodriguez said. However, it is important to pay attention to the planting calendar as there are two primary growing seasons, fall and winter, and each has their own challenges.

Sanchez said that large crops in San Elizario still include cotton, corn for fuel and alfalfa. But in the local gardens, green beans, broccoli, onions, maize, radishes and potatoes all thrive. Potential cash crops may include pomegranates that adapt well to the arid climate.

“What we’re trying to do is move into methods that will help us embrace what we have and rather than fighting nature embracing it and working together with what will grow naturally or at least with the least amount of help,” Sanchez said.

Sustainability for the future

Educating today’s youth about sustainable practices can be a challenge.

“We have a lot of young people in San Elizario who don’t, who aren’t familiar with the rich tradition of agriculture out in San Elizario and I think with a lot of the movements around the country back to small farms, and back to a more sustainable way of life… we want to make sure that our youth are very well aware of a world outside of them,” Sanchez said.

In spring 2012, Rodriguez spearheaded El Paso County’s first community garden project located at Ascarate Park. Youth from the nearby county juvenile probation department helped with the project. The garden is now used for demonstration purposes, and food that is harvested is given to a local food bank. So far, more than 1,000 pounds have been donated.

“We feel it’s really important to give back to the community as well increase the amount of fresh vegetables and fruit that they have available,” Rodriguez said. The community garden movement may also contribute to a national war on obesity. According to the City of El Paso Department of Public Health, in 2010 almost 29 percent of adults over the age of 20 were considered obese. The Texas Department of State Health services reported in 2009 that almost 30 percent of Texas high schoolers were overweight or obese.

“It’s very clear that our youth need to be educated in order to fight the obesity and at the same time getting involved and taking ownership and pride in something that you’re actually growing. Maybe they wouldn’t have eaten a carrot before but they saw it from seed to actual product,” Sanchez said.

Rodriguez said, “It’s being aware of what we’re consuming. We’re such a highly populated area in this small little tip of Texas, that we don’t really know where our food comes from… but it’s really great that we have people interested in going back to those simpler times.”

Kirstie Hettinga is an assistant professor of communication at California Lutheran University in Thousand Oaks, Calif. She teaches courses in journalism and advises the student newspaper, The Echo. Previously, she served as a visiting assistant professor at Ursinus College outside of Philadelphia. There, Hettinga taught courses in journalism, media ethics, media history and news analysis. She also advised Ursinus’ student newspaper, The Grizzly, and helped launch its first online edition. Hettinga earned her bachelor’s degree in mass communication-print journalism and theatre arts, as well as a master’s degree in mass communication and journalism from Fresno State. She earned her doctorate in mass communications from Penn State in 2011. In graduate school, Hettinga had internships with The Centre Daily Times and Accuweather.com. The Accuweather internship was through the Dow Jones News Fund and Hettinga continued as a staff writer after completing the internship. Hettinga’s research addresses issues of media accountability and accuracy. Her work has been published in Newspaper Research Journal and Journal of Mass Media Ethics. Some of her research also focuses on student-produced media.