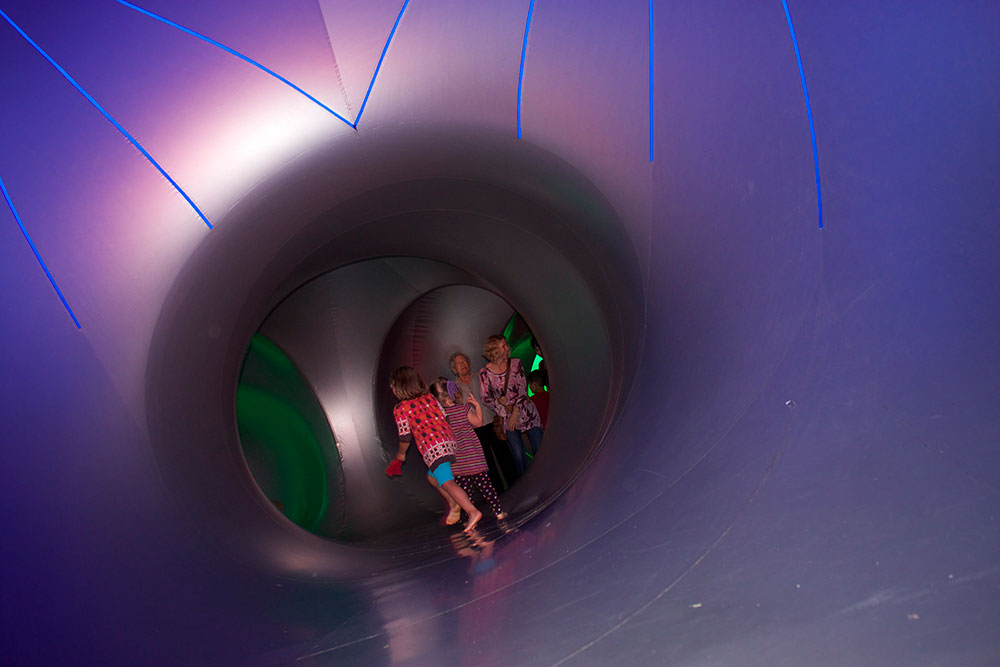 Visitors to the Mirazozo Luminarium compared the experience to walking into a kaleidoscope. (Francis Regalado/Borderzine.com)

EL PASO – Inside a structure shaped like a spaceship, a world of bright luminous red, green and blue stripes of light form bouncing patterns of color on the walls of five metallic domes like fireworks in outer space.

The structure, called a Mirazozo Luminarium, a creation of the British company Architects of Air was brought to El Paso as part of this year’s Chalk the Block event from October 12 to 14 and was displayed on Cleveland Square Park, next to the El Paso Museum of History. Visitors to the Mirazozo Luminarium compared the experience to walking into a kaleidoscope. (Francis Regalado/Borderzine.com)

“I think it was awesome, “ said Esmeralda Quintana. 29. “I carry a kaleidoscope in my car and being inside the Luminarium was a dream come true.”

Residents approaching the event could see the 158 ft. long and 94 ft. wide metallic dome in the distance. The inflatable structure included one dome big enough to house a theatrical performance.  It looked like a village created in a science fiction movie.

“Each structure has it own design, but they are the same principle of domes, direct light, reflective light, no two alike,” said Shanti Freed, exhibition manager of Architects of Air.

Freed said the structures are priceless because they cannot be duplicated. She said the Mirazozo Luminarium toured the United States this year in six different events.

Architects of Air is a British company created by Alan Parkinson the artistic director of the company. In 1992 Parkinson created his own inflatable structure in collaboration with a center for people with disabilities and a theater group. They later toured the United Kingdom, and Parkinson got the idea to create his own company, AOA.

“He tries to make a sculpture each year, each sculpture lasting four years,” Freed said.

According to the company’s website, Parkinson experimented with pneumatic sculptures. He wanted to build a structure that impacted the senses, a highly visible centerpiece to a festival.

The Mirazozo Luminarium designs are inspired by the geometry and nature, and by Islamic architecture.

The luminous seam aims to create an eye opening experience. The patterns of light and their reflections change from different angles. Spectators could enter the room from different entrances to get a different perspective. The MIrazozo Luminarium filled the Cleveland Square Park. It was the biggest structure at Chalk the Block 2012. (Francis Regalado/Borderzine.com)

Freed said the biggest challenge they face is the weather because windy days make it difficult to keep the structure standing. She was also concerned about the heat, but she said that with air conditioning people might not want to leave. The entire structure takes about two days to set up by a team of six people.

“There are two of us here with this structure in El Paso, on different events we have four or more persons depending on how long we are here. There are eight volunteers working at any one time,” said Gabriel Burden, exhibition manager of Architects of Air.

The Mirazozo Luminarium usually remains open on average six to seven hours a day for 1200 to 1400 visitors. Freed believes this particular structure has another year of touring before it goes back to the shop in Nottingham, UK.

“It was pretty much at capacity the whole time we were open,” Burden said.  According to Burden it can hold up to 80 persons at one time.

To enter the Mirazozo Luminarium guests are asked to remove their shoes.  It is important to maintain a consistent airflow inside the dome so that it won’t collapse. To do this, volunteers must alternate opening two doors when letting people in and out.

Once inside, guests can roam freely, lie down and enjoy the ambience of music and beauty of the light. There are pockets were guests can sit in soothing tranquility as they admire the view.

“It’s nice to have a reason to come downtown.  There (is) a lot going on, “said Beth Wells, a resident of El Paso.