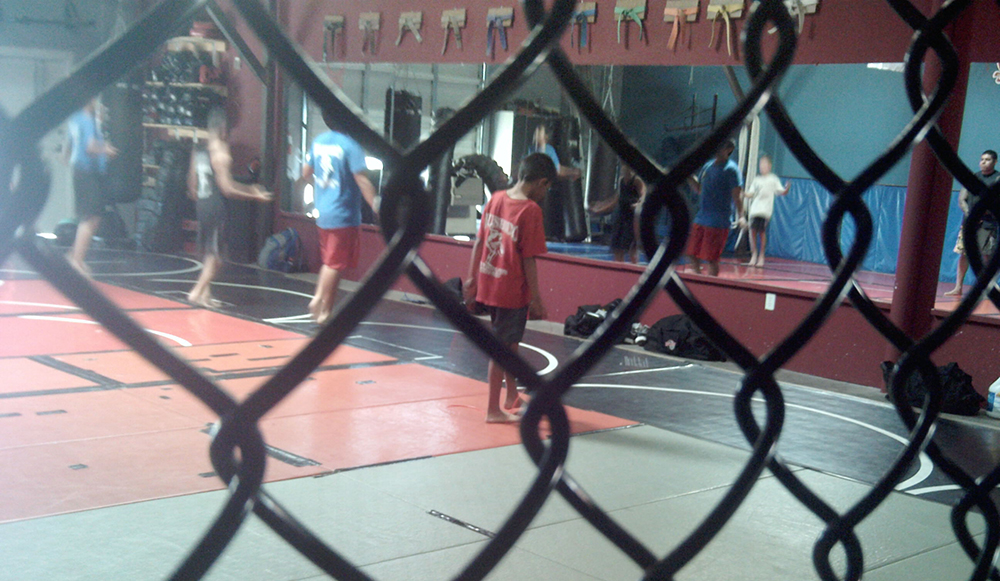 A sport that only 15 years ago was banned in most of the 50 states is now the fastest growing in the U.S. (Shane Hamm/Borderzine.com)

EL PASO – The two boys wrestling on a padded mat inside a chain-link cage barely tall enough to ride the teacups at Disneyland grab at each other, one grasping the other’s leg leaving himself vulnerable as his opponent throws him off-balance.

The sensei or master stops the action after the new student with the structural integrity of his elbow in jeopardy gives a tap of his hand in submission. A sport that only 15 years ago was banned in most of the 50 states is now the fastest growing in the U.S. (Shane Hamm/Borderzine.com)

This is the sport of children’s mixed martial arts or MMA, a new trend in this fast growing sport with children less than 10 years of age strapping on gloves and shin guards in order to pummel one another.

While the sport for children in this age group looks like organized rough-housing, their goal is to defeat the opponent utilizing hand to hand combat techniques from muai thai, kick-boxing, wrestling and boxing.

Cynthia Baca looks on as her six-year-old son Mason engages in a contact sport played behind a caged wall.

“I have only seen fighting on TV, but never saw my son participating,” Baca said.

She said this as the other player gets on top of her son, her worried eyes focused on the action.

“I can’t help but be concerned. We decided to put him in MMA classes because he was so hyper and we wanted him to be disciplined. I never expected the class to be so big and so well organized,” Baca said.

The sport that only 15 years ago was banned in most of the 50 states and called a “blood sport” and “human cock-fighting,” is now touted as the fastest growing sport in America.  It has evolved from a collection of different martial arts to becoming an art in itself, morphing into an athletic spectacle with clear and concise rules.

For children under the age of 14 most tournaments require protective gear from head, chest, hands and legs.

Rules for the children can range. Submission fighting is not allowed by any athletics commissions in the country yet but the rules are as follows: Striking to the head or body using the feet or hands (no knees or elbows). No strikes to your opponent with your feet while he is on the ground. No biting or scratching. No strikes to the back of the neck or back of the head. No strikes to the groin area.

Winners are decided by knockout, submission, referee stoppage or may go to a judges ruling. The rules are the same for adults with the addition of submission fighting.

Here in the Sun City the growth of the sport can directly be attributed to the first true MMA academy, Bushido, led by owner and professional MMA fighter Hugo Sido.

His classes are divided up into the children’s class for ages six to nine and his youth class from ages ten to thirteen.

“In the beginning this was the only MMA gym in El Paso in 2002,” Sido said sitting underneath his championship belts. “At the time I could only have adult classes but by 2006 we started the kids classes. Now it has grown to a class of 50.”

Adding youth classes was groundbreaking for martial arts in El Paso. The ground shook for parents as they struggle to grasp the concept of allowing their offspring to be hit.

“I even sometimes have to turn away,” Geraldo Viramontes said while his nine-year-old Jr. was sparring in the background. “I grew up with football and pads and they had helmets. Now they (children mixed martial artists) have a padded mask and some gloves. He (Jr.) loves it though.”

Sido recognizes the concerns of parents but cites that the sport rarely has severe injuries and in his classes, he stresses that safety is of the highest importance.

“We always try to protect the kids,” Sido says with the slap of one of his students kicking another and their shin guards connecting. “We make sure they have all their safety equipment from gloves, to headgear, to cups, to shin guards and we make sure there is 2-3 instructors supervising at all times.”

Injuries occur in every sport and in a sport in which its participants are striking with their heads and feet the danger is greater. For children, the fear of injury is multiplied and this has experts concerned.

“There is no doubt that this sport is dangerous,” said Candice Villegas, board certified athletic trainer. “These are children doing the kicking and punching and serious injuries can happen. Besides from broken bones and bruises concussions can also occur and at a developmental stage in these kids lives, those things can carry with them the rest of their lives.”

Athletic commissions around the country have yet to allow full contact MMA fighting for children below the ages of 18. They instead allow them to compete in amateur style fights that don’t allow submissions but “standup” (strikes with hand and feet) and “ground and pound” (wrestling and striking on the ground) are admitted. This is all done with complete headgear and padded vests.

MMA has been attacked since its inception in 1993 with the first Ultimate Fighting Championship tournament. The sport has endured and flourished and offers more than just blood and brutality to the participants.

“Things have changed,” Sido said. “You don’t see karate dojo’s opening up anymore. You see MMA gyms and classes for kids, women and men. It’s a great workout and it teaches discipline and self-defense. Children doing MMA is only the beginning of what this sport will do.”