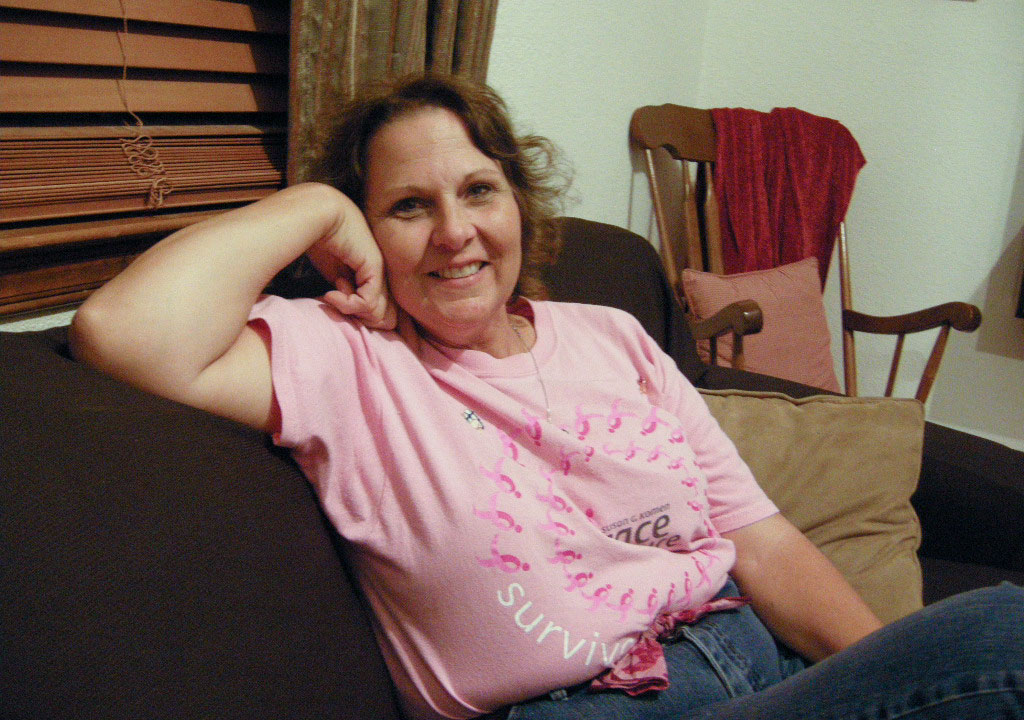 After going for a walk, Coleen Marquez, 51, came home and suddenly felt a pain on her right breast and, saw later that it was a spider bite she had gotten while changing. It began to swell up and she immediately went to the doctor. She, was always meticulous about her breast self-exams and check-ups, but for some unexplained reason she had missed her appointments in February and March of 2004.

“The doctor gave me antibiotics for the bite mark and sent me in for a mammogram,” said Marquez. “After my follow-up and another mammogram, the doctor saw something he wasn’t sure of.” After a biopsy, Marquez was diagnosed with breast cancer in April of that year. “A lot of thoughts went through my mind. The battle for my life began and I didn’t know if I was going to win,” Marquez said with tears in her eyes. After surgery and treatment she is now a breast cancer survivor.

“I was given the news over the phone while at work because I kept insisting the doctor tell me immediately!” Marquez said. “I remember telling my boss and all he said was that we were going to fight this.”

In July of that year, Marquez went in for her first surgery, a lumpectomy that removed a discrete lump from her breast, but it wasn’t clear enough to continue with the procedure.

A mastectomy – a full removal of the breast – was performed on Marquez and seven infected lymph nodes were also removed. Marquez was at a stage two with a cancer called aggressive carcinoma, an estrogen-fed type of cancer, which doubled itself in a 52-day span before her surgery.

“I wanted this monster out!” Marquez said. “And I began to question myself, why me?  What did I do to deserve this? What did I eat? Drink? Who was I with?”

She then realized she hadn’t done anything wrong or hung out with the wrong type of crowd, but was simply a chosen one for no rhyme or reason. Her daughter was seven years old at the time of her illness and couldn’t help but think she would not get the opportunity to see her daughter grow up, graduate or get married.

Chemotherapy was the worst pain Coleen has ever had to endure. She suffered with bone pain and since chemo kills white cells, it affects the immune system. Therefore she felt weak all the time. Coleen had to be extra careful with what she ate, how she prepared her food and what she touched. Her husband was her biggest supporter during her treatments. He did everything for her and even taught their daughter to do the chores her mother wasn’t able to do.

“Sometimes, I couldn’t even walk due to the chemo,” said Marquez. After an excruciating eight treatments of chemo every two weeks, she decided to shave her head. “I had to wear beanies all the time and I remember my black cat would fall asleep on my head to keep it warm!” Marquez said with a smile. She has impressed many women who are battling or have conquered breast cancer with her strength, courage and endless hope.

It is estimated that there are 330 new diagnosis of breast cancer each year in the El Paso County with nearly 70 deaths per year, according to John Payne, the event manager at Susan G. Komen for the Cure El Paso. This movement has been in the forefront of the fight against breast cancer receiving donations from all over the world, with community health outreach programs and ongoing extensive research.

“Hispanic women in our city are more likely to die of breast cancer than Hispanic women across the state or nation,” Payne said. “This is due to the lack of information and resources to make breast health a priority.”

Payne explained that Susan G. Komen’s fiscal year runs from April 1 to March 31, where 75 percent of the funds stay within the El Paso County in the form of grants to other non-profit organizations to fund breast cancer related services to the underserved patients.

The remaining 25 percent is sent to the Headquarters in Dallas who use the money to fund National Research Grants. The El Paso affiliate has invested more than $3.9 million to provide education, screening and treatment resources.

There has been an increase in early detection for breast cancer with nearly 75 percent of women over 40 years of age receiving regular mammograms, the most effective tool for detecting this illness. The survival rate, if caught early, is now 98 percent compared to a 74 percent in 1982.

According to Payne, in 2012, a total of $280,963 was awarded to five local organizations and educational institutions in El Paso. These programs range from education, outreach, screening mammograms and diagnostics to surgeries, treatment, oncology services among others.

After struggling with a serious allergic reaction to one of her treatments, Marquez was determined to reach the finish line one way or another. She had a total of 36 radiation treatments five days a week and after a long fight, she was finally finished in January of 2005. She was put under an anti-hormone, Arimidex, which decreases the amount of estrogen the body makes for five years, and then she began her reconstructive surgery.

Susan G. Komen for the Cure in El Paso concentrates on events that allow them to broadcast educational messages. “We participate in many health fair settings and give several presentations in schools and businesses,” said Payne.

“It’s up to you to watch and take care of yourself,” Marquez said. “When I wake up in the mornings and hear the birds, I know I’m OK and God has given me another day.”