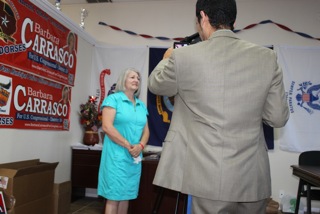 O’Rourke won the Democratic primary election with a margin of less than five percent of the vote and he says he did it with legwork. He explained that what made his team the best was that people of all ages and all walks of life came together with the same idea to better the community and did what it took to make it happen. “We were able to put together one of the best teams in campaign history in El Paso,” O’Rourke said.

Democrat O’Rourke and Republican Carrasco have different positions on the following issues important to the El Paso community, such as job creation and the economy, education and healthcare.

They both acknowledge the need for job creation. Carrasco says she would work to ensure clarity and predictability in tax code and government regulations to allow the private sector to grow. She would also be against any Department of Defense cuts.

O’Rourke said he plans to make sure that bids for contracts at Fort Bliss include proposals from companies in El Paso. He also said he will work to make the international bridges run more smoothly to keep El Paso’s the economy advancing.

Both candidates are concerned about No Child Left Behind. O’Rourke said it was a well-intentioned piece of legislation but it doesn’t work and he wants to scrap it and give the accountability to the districts, teachers, and principles. Carrasco said the legislation needs to be looked at to find out why it works in some districts and not others.

Healthcare is another issue that separates these two candidates. Carrasco would repeal and replace Obamacare, which she says will hurt children, the elderly and doctors. O’Rourke supports the Healthcare Reform Act and he said he will ensure that it provides with quality care and not volume.

In preparation for the upcoming election, O’Rourke and his team of volunteers continue to focus on “block walking” to reach out to the community. They issue flyers, and pamphlets and even organize meet-and-greet events so that O’Rourke can talk to the voters. Joey Torres, accounting student at the University of Texas at El Paso, said he has followed O’Rourke’s initiatives for some time now and agrees with him on issues such as the downtown revitalization plan, the legalization of marijuana and gay marriage benefits. This encouraged Torres to volunteer for the campaign.

“I thought all that was really really great. I met with him, we talked about what changes need to be made in El Paso to make it a great city,” Torres said. “I am willing to drop everything. I want to help out full time on this campaign.”

If elected, O’Rourke said his top priorities will be employment, better management and staffing of the international borders, and would encourage the use of local firms for contract work in Fort Bliss.

When it comes to immigration, O’Rourke said he plans to support the Dream Act. He explained that the Dreamers are contributors to our community, schools, culture and society, and he wouldn’t want to lose their potential contributions to this country.

“I hope when people hear our two sides on issues like immigration they make an informed decision,” O’Rourke said.

Carrasco’s campaign has a group of about 35 volunteers that also go door-to-door talking to the city residents and Carrasco takes turns going to different areas with the volunteers. Her campaign also focuses on phone banking and they attend Friday games and community gatherings in efforts to stay in touch with the voters.

“I’m very confident that El Paso will see that if in 2012 family values doesn’t transcend party, we are going to lose our country.” Carrasco said. “Were going to fight for our city and we are not going to send an infection to Washington,” she added.

Carrasco said she plans to stop the budget cuts at the Department of Defense because these cuts are affecting the veterans and El Paso’s economy. If she goes to Washington, she wants to promote an environment that will expand the private sector to create more jobs.

On September 15, there was a debate at Burgess High School that was run by the Student Government classes. El Paso voter and retired schoolteacher, Leonard Hoffmann, went to the debate along with his daughter Stephanie, 17, who will be eligible to vote in the upcoming election hoping to gather information about the candidates. Hoffmann said he is not affiliated with any specific party, but his vote will depend on moral issues such as marriage.