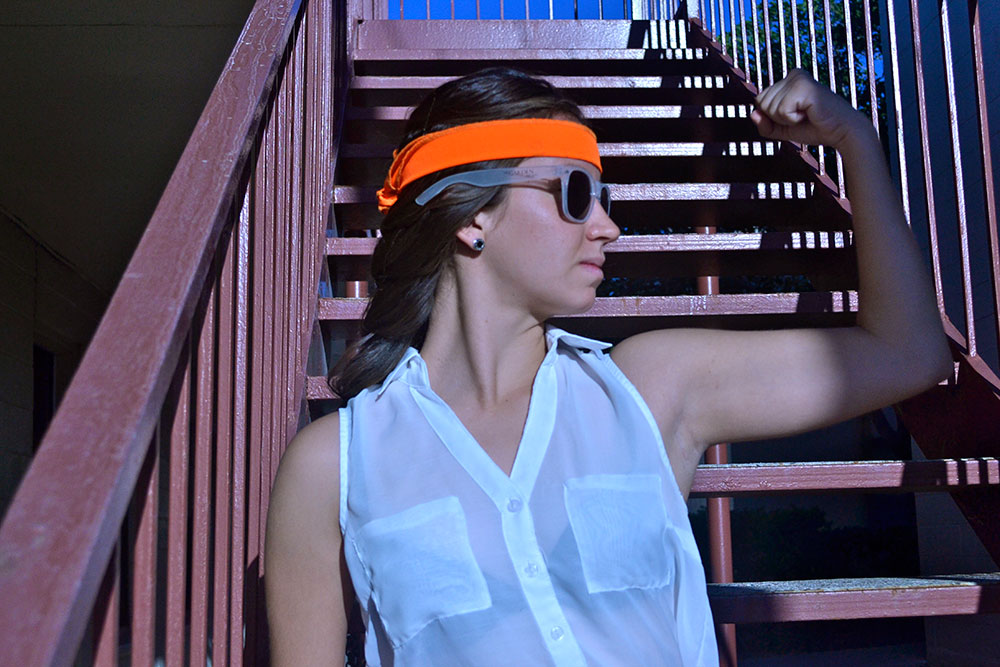 EL PASO – As Anamaria Camargo gazes around her Business Law classroom from the back seat of the auditorium at the University of Texas at El Paso she sees 10 ponytails out of 50 heads and she realizes that women in her field are still outnumbered by men.
Camargo’s next stop is the weekly meeting of UTEP’s Women in Business Association, where women in her line of study are striving to make a difference.

She struts proudly through the hallways of the Business Building wearing her light-pink collar shirt with the initials WBA embroidered on her chest. Camargo, 21, is an Accounting major at UTEP and the president of WBA, the first and only all-women organization of its kind at the university. “We had a hard time establishing a professional reputation in the College of Business just because they see that it is an all-girls group,” Camargo said.

She said it is important to build a path for other women to follow in these careers. Camargo noted that only about 18 CEOs in the Fortune 500 companies are women, which tells her that there are many challenges ahead for women who want to succeed in the corporate world.

“People say that you should do business the men’s way, and personally, I don’t think there is a men’s way. There is only one way of doing business, regardless of your gender,” Camargo said.

Irma H. Lopez, who works for the Human Resource Services at UTEP, has been on the staff for seven years and she was recently promoted from assistant to associate director of the department. She helps organize and supervise the 2,200 employees in the university.

Prior to coming to UTEP, Lopez worked for a maquila plant with offices in both Juarez and El Paso as director of the human resources. She said she was the only female with a high-ranking position in the entire company.

“My first eye-opening experience was when I got pregnant in 1989 while still being the director. I told my boss I was going on maternity leave and he just freaked out,” Lopez said.

Like many women, Lopez said she had to sacrifice job opportunities in the past because she chose to give more attention to her family’s needs. If she wanted to pursue a better position in her career she would have had to relocate every three or four years.

This was impossible to do with young children, but now that her children are grown, she plans to focus on her career.

Lopez said she found inspiration in UTEP President Diana Natalicio because the knowledge and confidence she exudes projects the image of a powerful woman.

“Diana Natalicio knows with what kind of people she can surround herself with in order to be successful,” Lopez said.
UTEP’s administration board of vice-presidents currently has one woman and seven men. In comparison, the department dean positions are divided equally between men and women.

Like UTEP, there are other universities with women presidents including Harvard, Princeton and the University of Pennsylvania.

Although UTEP has a woman president, most departments have a majority of men. There are 66 men faculty-members in the Department of Business and 32 women. The faculty of the Department of Engineering consists of 106 men and 19 women, according to the Center of International, Evaluation Research and Planning from UTEP (CIERP).

The only departments in which woman outnumber men are Education, Health Sciences, and the School of Nursing.

“I hear horror stories from women that have been in the field for years who say they still deal with men who do not believe women should be in engineering,” said Elizabeth Akers, Civil Engineering student at UTEP and president of the Society of Women in Engineering.

Akers said that she believes that how men were raised impacts the way they treat woman. She has noticed that men who grew up with sisters are more comfortable with women taking leadership positions, while other men still think they need to be the main “bread winners.”

“My parents raised me to enjoy all things in life, not just the girly things. I grew up playing with both Barbies and Star Wars, so I am able to jump into a conversation about sports but then switch gears and talk about shoes,” Akers said.

Eira Chico, a senior majoring in Mechanical Engineering, said even the professors tend to address the students as “guys” and sometimes retract themselves when they see a few female faces in the crowd. Chico admitted to have more male friends than woman because of her academic environment.

The obstacles that these women face in fields like Business and Engineering might go unnoticed by some male students.
“Success is relative to each person’s goals. A successful woman in the field of engineering is the one that reaches the objective she pursues,” said Andres De La Vega who is majoring in Mechanical Engineering at UTEP.

Organizations such as WBA and SWE focus on providing the necessary tools and support for women to succeed in the fields of Business and Engineering.

Akers, Camargo and Lopez coincided when asked, “how does it feel to be a woman?” All three answered with the same word, “empowering,” without ever meeting each other or knowing what the others had said.