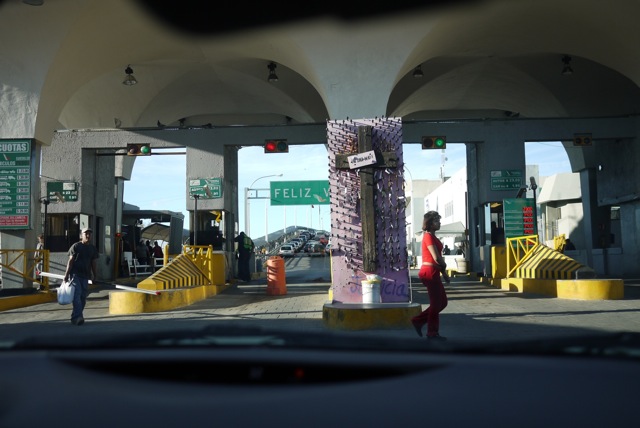 View from our car approaching the Paso del Norte Bridge on the way back to El Paso from Juarez. (David Smith-Soto/Borderzine.com)

EL PASO – Cinthia was only 10 years old when they killed her.

The little girl, full of life and energy, went out one evening to play in the park just one block away from her home, just like she did so many times. The neighborhood in Cd. Juárez was generally calm, but that one particular day in 1997, Cinthia simply disappeared. After twenty days of distress, her family was notified by the authorities they had found Cinthia’s body in a dumpster.

This is the true story of “Mariposa,” one of the 12 stories found in the second volume of the book Mi Vida en Juárez: Voces de Mujeres. The 120-page book was a result of a literary contest held by the project Pacto por la Cultura and it tells the sagas of women who live in the violent city of Juárez.

“I could have imagined anything, but that they found her in a dumpster? What do I do with this? Where do you place this? Where do I place the word to understand it? To feel it? It’s something you can’t assimilate,” the girl’s aunt, Rosario, told writer Patricia Cabrera. In memory of the women of Juárez. (David Smith-Soto/Borderzine.com)

These questions clouded Rosario’s mind while she made her way to the morgue to identify her little niece’s body. Feeling nothing but fear, Rosario walked up to Cinthia’s lifeless body. She was lying there, her body had deformed with time, and Rosario recognized her by the clothes she was wearing and a mole on her foot. The report said she died strangled the same day she went missing. Rosario, devastated, searched for years to find the murderer of her “mariposa.” She did not stop until she saw him behind bars and to close the chapter, she decided to share her story.

Pacto por la Cultura has had two contests, one in 2006 and another in 2009. The project included literary workshops and meetings to produce this book. Some women wrote their texts. Others who had never written a book told their stories to writers. To help these women, organizers of Pacto por la Cultura began doing several workshops in different parts of the city to help women tell their stories.

Veronica Corchado, event coordinator and member of the Pacto por la Cultura, has worked with hundreds of women helping them tell their stories.
“In my experience through these two events, I have noticed the transformation of several of these women. It’s evident that these types of exercises are helping them break with the vicious cycles of violence,” Corchado said.

Deborah left her house and belongings in Veracruz to start a new life in Ciudad Juárez in August of 1999. Along with her husband, sons, daughter and grandchildren, Deborah found in Ciudad Juárez a city of hope and happiness. Rapidly they found jobs, they bought a large amount of land for a low price and soon enough they had their lives settled.

The blessings tragically ended with a phone call from the morgue, “There are three unidentified bodies. One of those could be your son.”
From that day on, Deborah’s family would never be the same. Dany, Deborah’s older son was kidnapped and killed. He left a wife, three children and a heartbroken mother who decided to share her story titled Con el alma en la mano in this book.

The book also presents the story of Gaviota, a transgender woman who tells of a stage in life where she lost herself in a fantasy world of drugs and commercial sex. Gaviota’s goal was to serve as an example to show people that there is a way out of that life. Gaviota died before the book was published.
Each of the stories in the book narrates the struggle these women fought in Ciudad Juárez.

Mariel Macias, one of the writers of the book, said that the best way to stand up to violence is through culture and writing. Like hundreds, if not thousands of women in Juárez, I was pushed to do something.” My tool is my typewriter, well my computer, and my motivation is the love for my neighbor and my faith in a better future,” Macias said.